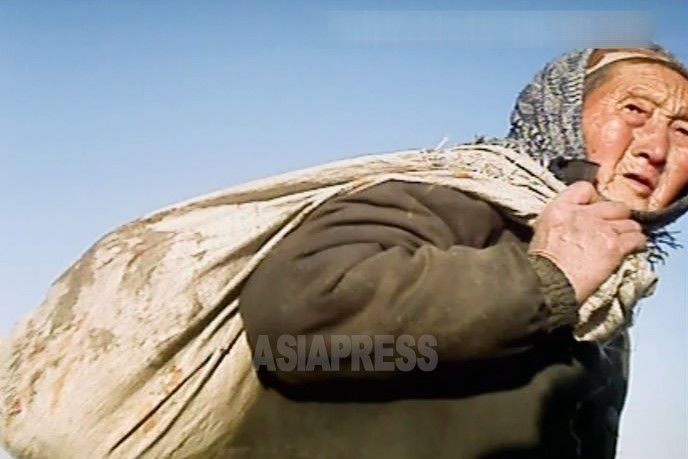 (Photo) An elderly lady scours a field for rice following a harvest. Photographed in rural Sinuiju, North Pyongan Province in November, 2012 by ASIAPRESS

But which section of North Korean society is being forced to live in the worst conditions? A reporting partner living in North Korea, when asked this question, answered, “The farmers have it toughest. There is a growing number of ‘hungry households’ with nothing to eat- more and more people are starving.”

Farmers are the ones producing the food. So why are they the ones starving?

The North Korean government, stubbornly maintaining its system of collective farming, imposes quotas on cooperative farms to produce food for the military and the rest of the country. Farmers are allowed to keep whatever crops they produce in excess of the quota. However, the quotas are set far too high. And, as food distributed after the fall harvest runs out, many households begin to starve.

◆ Drastic reduction in rations for workers in the munitions industry

What other people are suffering?

On May 9, a reporting partner living in a central region of the country said, “Munitions factories are concentrated in Chagang Province, where, since spring, food rations have stagnated- people are now starving.”

Changang Province, home to the munitions industry, is an area which is strictly controlled by the government to maintain secrecy. As such, workers are given extra food such as bread, cooking oil, and sweets in addition to the usual food ration. In other words, many residents in the isolated province are entirely dependent on the state for food. So, should the distribution system fail, they can quite easily find themselves in trouble.

The difficulties faced by these people would be greatly alleviated if restrictions on private trade were simply eliminated. With cash earned through private market activities, they could procure food on their own.

What about ordinary people in the cities?

A merchant woman, living in a northern region of the country, said, “If you go to the market, there is food there. But nobody has any money. Private business is struggling so the cash flow has been greatly reduced.”

Many factories and companies in urban areas stopped dispensing wages and distributions a long time ago. Therefore, wives of workers have to earn cash to buy food through their own market activity. As the economic sanctions have damaged North Korea’s exports, however, the economy and purchasing power of residents have worsened dramatically. Despite this, the woman says, “We are not facing starvation just yet”.
Next page : Rank-and-file soldiers starving the most...