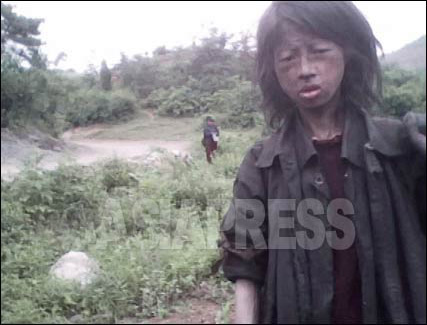 This 23 year-old homeless woman was found dead in a corn field in October, 2010. She died of starvation. Reporter Kim Dong-cheol tells us that "the number of homeless and suicides have greatly increased since the 2009 currency reform." This video was taken in June 2010. (Video image by Kim Dong-cheol/South Pyongan Province, North Korea, ASIAPRESS)

A 23 year-old woman Rimjin-gang reporter Kim Dong-cheol previously interviewed was recently found dead in a field. Kim was conducting undercover reporting in South Pyongan Province in June 2010 when he met an emaciated, soot-blackened woman in the suburb of the city. With a weak voice, she told Kim she had recently lost her parents, her home, and had since been living in the streets. Kim couldn't catch her name because of her weak voice.

At the time she was gathering grass to feed rabbits. In that region of the country, many households are obliged to feed rabbits at home and local schools gather them. It is said that these rabbits are used to supply food to the military or fur procurement. She was selling what she gathered in the market to make what little money she could.

This video interview was smuggled out of the country and distributed by ASIAPRESS. It had a large impact on the global community after footage was broadcast on major stations such as ASAHI TV (Japan), KBS TV (South Korea), ARD (Germany) and BBC (UK). In particular, after a feature report on South Korean KBS was aired on October 3, hundreds of comments were posted on the program's website expressing deep feeling of sympathy for her.

Kim informed us she was found dead around October 20, 2010, only a few months after meeting her:

" Without a home, she had survived by begging in the market and along the road. But one day she was discovered dead in a corn field. It was the corn harvesting season at the time, so she was probably trying to find raw corn to eat. A neighborhood reported that there was a woman's body lying in the field and rumors spread around the area. It was later confirmed that it was the body of the 23 year-old homeless woman. It seems many days had already lapsed since her death, as the body had begun to decompose. But local police still left it there for a long time."

Currency reform, the 2009 redenomination of the won, has caused massive economic turmoil in North Korean society, leading to increases in homelessness and starvation in several regions. For families like that of this woman, the policy destroyed their livelihoods. They had no choice but to sell their homes and wander the streets. She is one of the victims of this reckless redenomination policy. (2011/Feb/05)