The rapid spread of stimulant drugs in North Korea is becoming a serious social problem in the reclusive state. The problem has reached the point where even police officers and members of the state security department (intelligence service) are involved in both the dealing and use of illegal narcotics. Drugs are also having a corrosive effect on the younger generation in North Korea.

The most common drug currently on the scene in the DPRK is known as 'eoleum' 얼음 in Korean, and is used as slang in North Korea to refer to all methamphetamines. Drugs manufactured in North Korea were, until recently, cheap to purchase. Recently, however, the street price of these uncontrolled substances started to rise due to a widespread demand from ordinary people. 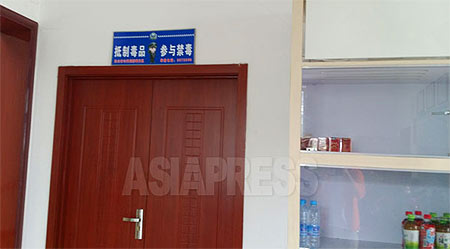 Rimjin-gang's defector reporter PAEK Chang-ryong recently contacted our North Korean reporting partner living in North Hamkyung Province. The conversation was made via telephone and is reported as follows:

PAEK: Can you describe for me the current situation regarding 'eoleum' in North Korea and how these substances are circulated among the people?

Reporting partner: I would say that the buying and selling of these substances are far more active than ever before. The price for these products is increasing. A year ago it was 100 Chinese RMB (around 16 US dollars) for 1 gram. Since the beginning of this year it has increased to 100 RMB for 0.8 gram. A small sack of product, made for only 1 to 2 uses, is sold at 30,000 NK won (around 4 US dollars).

PAEK: In your region, what percentage of people would you say use eoleum?

Partner: My region is mostly rural so there are a large number of farmers. I recently moved to this area and was really surprised to learn that eoleum is rampant in such communities. I feel so helpless when I see this situation. I can't give you an exact number of users but I guess around 40 percent of the population in the village has, more or less, some kind of connection to eoleom. In the Chinese border town I used to live until last year, it is not too much to say that 80 percent of residents had some experience with drugs.

PAEK: What kind of eoleum do people usually use?

Partner: There is a wide range of users. For example, from elderly men who might not have much longer to live to young middle school students aged around 14 to 15. I would say that even some housewives have experience with eoleum, except for those too tight with their money.

PAEK: It is sad to hear that even young students are taking to narcotics. I would have thought that the school or the administration would crackdown on that kind of thing.

Partner: No, there have been no significant crackdowns. Some students are openly asking, "Why not? We shouldn't we have a try?"

PAEK: Are there not strict controls and crackdowns by the state on eoleum dealing and trafficking?

Partner: The possession of up to 15 grams (=0.5 oz) is subject punishment by Labor Training Troops. (NOTE: Labor Training Troops refers to a labor correctional facility for those sentenced to less than six months.)
I don't have any idea what are the consequences for the possession of more than 15 grams, but even if you are over that amount and get arrested, the rich or privileged class of people can easily evade punishment by bribing police officers or security instructors (secret police).

PAEK: Are there any police officers or officials from the security department or judicial institutions involved with eoleum?

Partner: Yes. There are many. Sometimes they go and buy eoleum by themselves. If they don't have money with them, they've been known to pawn something like a bicycle. Since those who carry out the crackdowns are involved in eoleum trafficking and some of them are also users, the authorities are not able to enforce controls.