Heavy crackdowns fall on South Korean dramas but not on drugs
At the end of July, the local exchange rate for Chinese 100RMB was 120,000 NK won. In the same period, the price of 1 kg of rice was around 6,000 NK won. This means that 1 gram of eoleum would be worth 20kg of rice. It is much cheaper than the drugs sold on the foreign black-market in Western countries. Having said that, it is expensive for ordinary North Korean people whose wages and real buying power, remains low.

Of course, for those at the bottom of society, drugs are far from out of reach. For average people, the wall is not too high to prevent using illegal narcotics. Our reporting partner told us that people who want drugs will go to extremes to get the product they desire, including saving their living expenses or borrowing money. Usually the sellers are also users. 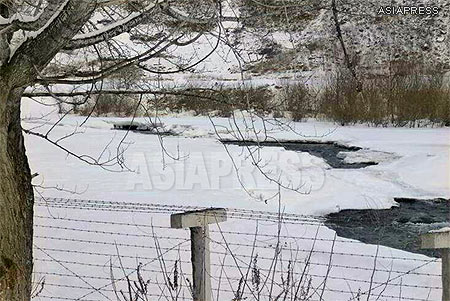 (REFERENCE PHOTO) A wire fence all along the Amrok-gang (Yalu River), a border river between North Korea and China. The Chinese authorities have installed the fence to prevent defections and drug smuggling from North Korea. (March/2014-China)ASIAPRESS

In North Korean society, life is limited, both politically and economically, and everyday people are under constant stress. This contributes to the widespread use of drugs. The lackadaisical attitude of the authorities towards eoleum encourages the trafficking of these products. Furthermore, these governmental organs are themselves engaged in the trafficking of narcotics, which is known to bring in a high profit.

The stimulant drug most in demand in North Korea is methamphetamine. It used be a product secretly produced under the control of the state for the purpose of smuggling out of North Korea and earning much needed foreign currency. As North Korea's neighbors have gone to extremes, including expelling DPRK diplomats, to stop the clandestine importing of these products into their territories, North Korea has almost entirely given up smuggling to foreign countries. Claiming to have suffered from the effect of the North Korean drug trade, China's heavy hand played a key role in reducing the flow of illegal narcotics across the Sino-Korean border and beyond.

Chemists and technicians who worked on narcotics for export and other chemical plant scientists manufacture the drugs currently in circulation in North Korean society. They run their own underground factories, or are recruited by underground groups. After smuggling products into China became harder, some groups shifted their networks to target domestic users.

Methamphetamine is usually marketed as a substitute for medicine, or as a product to deal with stress. In North Korean society, the feeling of guilt associated with using such drugs is negligible. Unlike in Western countries, there is a tendency among ordinary North Korean people to see these drugs as a recreational habit or a luxury; an extension of smoking cigarettes or consuming alcohol. This is despite the fact that these products are criminalized and traffickers can even face the death penalty.

As with many things in North Korea, those caught using illegal drugs are often able to escape prosecution by bribing the authorities; officials themselves, on occasion, are involved in this business. Given these factors, the use of methamphetamines has begun to spread in North Korean society.

The Kim Jong-un administration regards foreign video/DVDs, including South Korean dramas, as 'impure recording materials', and has been carrying out crackdowns, imposing heavy fines, on the illegal circulation, selling and watching, of such contraband. Given the fact that the state is taking hard measures against materials deemed a threat to the state, it seems a point of interest that the authorities are willing to look the other way when it comes to the domestic drug trade. I'm not sure what this sentence meant, so if I re-wrote it incorrectly then please let me know and I'll try again.

According to my personal observations, it seems that for the state, the expansion of the drug trade to ordinary people is not such a serious threat, compared to the increase of people watching foreign DVDs and attracted to the 'free, outside world'. Narcotics are, of course, illegal according to North Korean law; crackdowns continue sporadically, the death penalty on occasion used in an effort to set an example. On the whole, however, the state seems reluctant to take the measures required to control, let alone stamp out, the drug trade in North Korea.

Information on the widespread trafficking and use of eoleum in North Korea is based on research by our reporting partner who lives in the country's northern region. The sources are limited to the region in which this partner currently resides and the information may contain some partial inaccuracies. However, according to my experience when I was a North Korean citizen, and also from other testimonies by various sources, the spread of eoleum is an undeniable fact. There is no doubt that these drugs are having a seriously harmful effect on North Korean society and people.