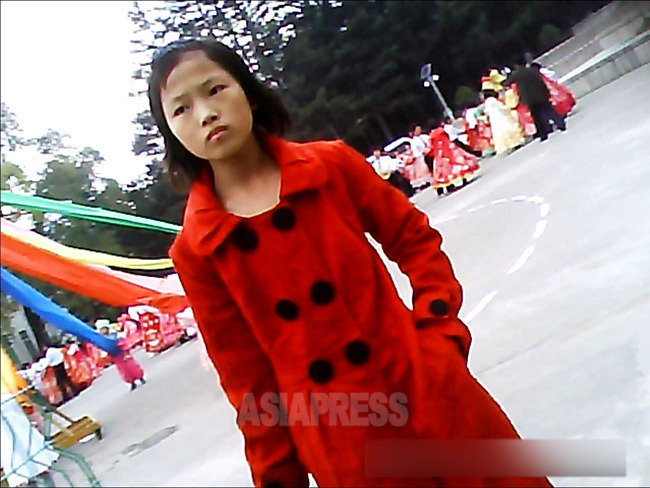 In the wake of the sex scandal that shocked the nation, 2,000 high school and university students were mobilized for a public denouncement rally on February 4 in Hyesan, Yanggang Province. (Kang Ji-won)

Multiple reporting partners confirmed the rally’s enormous attendance and provided descriptions of the event as well as insight into why it was organized.

A female college student who attended the rally described the proceedings thusly, “At 10 a.m. on February 4, the rally began at the art theater next to the Yalu River. I heard that 100 percent of the city’s high school students had been gathered for the event, along with students from the city’s mining, teaching, and agricultural colleges. The attendance rose to 2,000 as members of the local Women’s Alliance, Labor Union, and Party Administration joined the rally as well.”

As the rally got underway, the rumors that had been swirling around the city were all but confirmed- the students of Hyesan had been gathered to condemn the spread of pornography and the recent rise in sexual misconduct.

The reporting partner explained, “A group of 17 people, including 1 student, were dragged onto the stage. They had apparently been caught watching or trading pornography. Next, their charges were read out in detail. One woman was denounced for engaging in a sexual act with two men. Others were denounced for participating together in group sex.”

The reason for this unprecedented rally, was a scandal that shocked the whole nation. In January, it was reported by the ASIAPRESS, that 6 high school students (6th-year middle school students in the North Korean education system), had been caught having sex while watching Chinese pornography together.

The authorities were shocked by the scandal and believed that the youth had fallen victim to the influence of foreign, decadent culture. So, in response, the government decided to stage a massive rally to publicly denounce the perpetrators.
Next page: the authorities made a slew of arrests in the wake of the scandal…

1 2
Facebook Twitter はてブ Pocket Feedly
RECOMMENDATIONS
＜PHOTO REPORT＞Sino - N.Korea Border: ［PART2］A Sign of Late Spring In the Border Town of Hyesan
2014/April/19 (This report first appeared in the Korean and Japanese e...
＜Latest Report on N.Korea＞People Trapped Behind Barbed Wire (4 Photos)
In late July ASIAPRESS reporter recently visited the Yalu River on th...
＜Inside N. Korea＞ “My parents disappeared. I’ve been abandoned”... Are Sanctions Pushing Children onto the Streets?
Homeless children, rarely seen in North Korea in recent years, have be...
To Be Honest, the People of N.Korea Couldn't Care Less
Rumours that "One Rocket Launch is Worth Three Years of Food" --- Kim ...
＜Inside N. Korea＞ Regime Regulates Rice Prices as Pyongyang Residents Fear Inflation Rather Than Coronavirus
The Kim Jong-un regime’s decision to block the Chinese border to preve...
Female Workers Stage a Walkout En Masse
2015/May/28 ISHIMARU Jiro, editor in chief - Rimjin-gang KANG Ji-won, ...
〈Photo Report- 6 (a)〉 The Government's Command is for a "Strong and Prosperous Nation" -- but Workers Tired Out at Pyongyang Construction Sites to Build 100,000 Apartments
2013/June/17 Report byGu Gwang-ho(Original report:Aug, 2011) In the ca...
＜Inside N. Korea＞Military Cuts (Part 1): Military service for men cut from 13 to 8 years... What are Kim Jong-un's intentions?
According to a research conducted by our reporting partners living in ...
[Video Report] North Koreans Forced To Provide Labor
Citizen mobilization in North Korea doesn’t only mean mobilization in ...
Hyperinflation and Worsening Food Supplies to The Troops
Rimjin-gang - Periodic Report 2011-Feb-09 I am the chief editor publi...