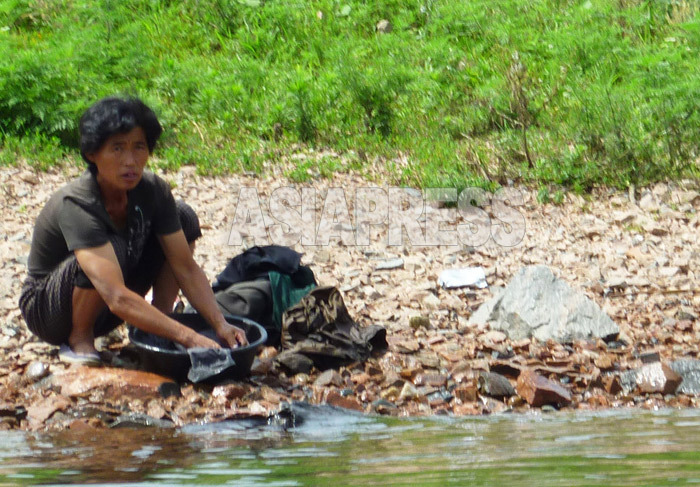 A woman is washing in the Yalu River. She couldn’t come to the river without the permission of the border guards. Taken in July 2017 from the Chinese side by ISHIMARU Jiro (ASIAPRESS)

The economic sanctions on North Korea seem to be working. ASIAPRESS reporting partners in North Korea reported that North Korean companies trading with China were experiencing hard times, and that the North Korean military was suffering from supply shortages. Did North Korea’s increasingly desperate situation lead to Kim Jong-un dispatching his sister, Kim Yo-jong, as an envoy to South Korea? (Kang Ji-won/ISHIMARU Jiro)

Reporting partner, 'A', who lives in North Hamkyung Province, delivered his report after he had visited several North Korean cities: "Some trading companies have ceased production since early October last year. There are a number of companies which are open, but without any business."

'A'explained the difficulties trading companies in North Korea are facing, saying "Kangsung Trading Company in Chongjin City owns a large building adjacent to Soonam District Market. As trading with China was shutdown, the company leases the building to merchants at the market as a storage or wholesale space. The branch offices of Kangsung Trading Company and Tongyang Company are leasing their offices for storage because of discontinued trading with China."

Naturally, poor business performance has resulted in the deteriorating welfare of the employees. 'A' continued, "Only the company’s president, accountant, and security staff came into work at the trading companies that I investigated. No work was assigned to the employees, known as'Trade Guides’.No wages,nor payments in kind,such as rice or cooking oil have been paid. Consequently,the companies are continuing to transport miscellaneous goods imported from China, but there are no lay-offs or closures, so far."

Another reporting partner,'B'confirmed the same situation in Yanggang and North Pyongan Provinces. 'B' reported that some mines which exported to China has ceased mining. ‘B’ explained, "Copper and zinc mines in Yanggang Province have almost entirely shut up shop, because export to China has become impossible. Payment of wages to miners have ceased, but the food supply seems to continue." 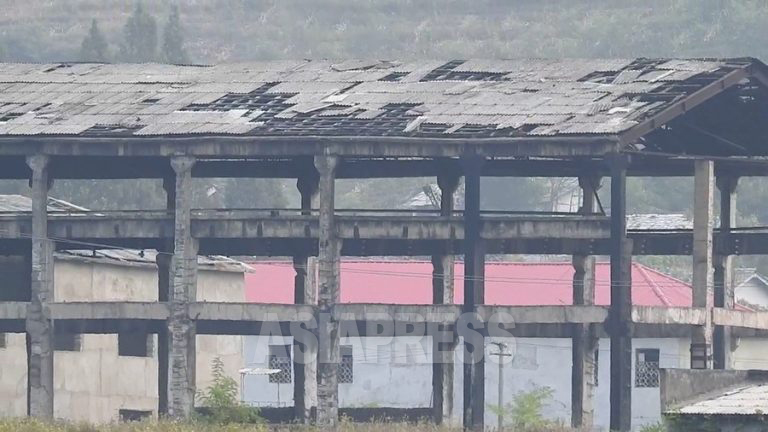 Thoroughly ruined Chongsoo Chemical Factory in North Pyongan Province. Taken by ISHIMARU Jiro from the Chinese side in July 2017.

The most sensitive sector to feel the effects of the economic sanctions is the fuel industry. The cost of gasoline and diesel doubled as the North Korean government enacted tighter controls on fuel supplies from April 2017, having anticipated the strict restriction of oil related products.The cost of a liter of gasoline peaked at KRW 2,692 at the end of January this year. (It plummeted to KRW 1,695 in February: ASIAPRESS investigation).

The sharp rise of fuel prices hit the military and ordinary people hard. As the military couldn't get the required fuel supplies from the government, they could not go to the collective farms to bring in the potato and corn crops from the harvests.

Reporting partner 'C', in Yanggang Province, reported "Originally, 'Rear Supply Units'were responsible for fuel supplies to the battalion and should have prepared vehicles to bring in the crops. But as there was no fuel, they used charcoal engines and oxcarts. It is also common that a delayed food supply encourages soldiers at checkpoints to extort food from locals. People in Yanggang Province are angry at the sharp rise in the price of timber for cooking and heating. Costs have soared due to the expense of transporting the timber to the cities. If a cart were left at the road side, people would steal it for firewood." 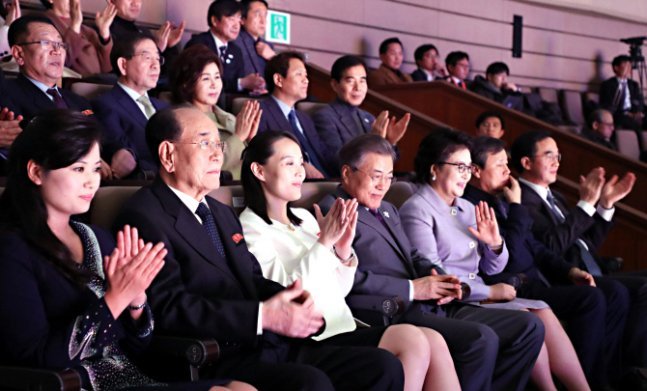 President Moon Jae-in and Kim Yo-jong watch a performance by the North Korean Art Company. Released by Blue House on February 11, 2018 in Seoul.

Facebook Twitter はてブ Pocket Feedly
RECOMMENDATIONS
“Secondary school textbooks issued under the Kim Jong-un regime” The list of textbooks and details.
※ The material is in Korean and Japanese only. There is no English ver...
＜N.Korea Crisis＞ Why is there a Food Shortage Crisis in the Breadbasket Region of Hwanghae? (PART2)
2012/May/10 Written by LEE Jin-suFarming Villages' Crops Taken by the ...
The Handcart Porter Is Now an Indispensable Business
The Daily Life of North Koreans2014/April/05 Written by PAEK Chang-ryo...
[Video Report] Kim Jong-nam assassinated. What do N.Koreans think about it?
Kim Jong-nam was assassinated in February 2017 in Malaysia. Most of av...
＜N. Korea＞ A Mysterious 33% Surge in the Won Against the RMB…Are the Authorities Manipulating N. Korea’s Currency?
The value of the North Korean currency, the won, has suddenly skyrocke...
Discontent Over Special Rations and Criticism Towards Wasted Expenditures on the Launch
2012/May/04 Written by ISHIMARU Jiro, Editor in Chief, Rimjin-gangDesp...
＜Inside N. Korea＞ Stomach-turning Tradition: Citizens Called Upon to Collect Compost of their Own Making for Collective Farms
2019/Jan/21 ◆ Kicking off the year with a "compost collection battle"...
＜Inside N. Korea＞ Markets in Turmoil Across the Country: Households Register to Receive Chinese Aid and Trade Grinds to Halt as Food Prices Hit Yearly High
Turmoil is spreading in markets across North Korea. The prices of sta...
＜Inside N.Korea＞ North Korean state agencies openly engage in large-scale smuggling
◆ Large-scale smuggling carried out in the open "All kinds of goods ar...
＜Inside N.Korea＞ Serious Damage To Homes Caused By Nuclear Test: Houses Damaged and Buildings Collapse
A strong earthquake, the result of the North Korean nuclear test on S...