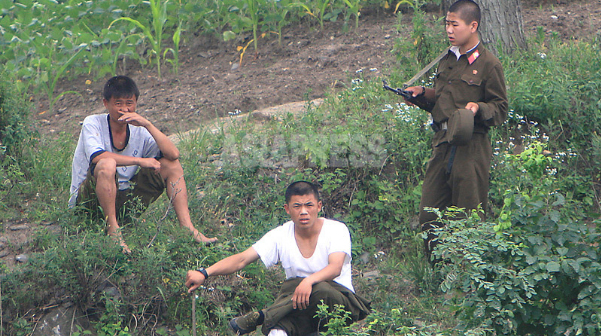 Border Patrol at the Border of Sino-North Korea (Reference Photo)

Many foreign media, including Japanese newspapers and broadcasting stations, started reporting right after arriving at Pyongyang, where the celebration of the biggest holiday for North Korea, the Sun Day, would be held. They report that celebratory atmosphere calmly prevail in neatly decorated Pyongyang.

It is a conventional propaganda strategy of North Korean regime to let foreign media cover their big ceremony like this. On the day of 13th the media were guided to ‘Ryomyong Street’ with skyscraper apartments which had been rushed to finish by Kim Jong-un’s urge. It is expected that the media would cover the preannounced military parade (North Korea calls it ‘military review’).

Kim Jong-un regime has two major targets. The first is to show that the North Koreans with unanimity under Kim Jong-un’s leadership are achieving economic progress without difficulties, although there have been pressures by the joint drill of US-Korean military and the economic sanction of the international community. The second is to make it clear that the North Korean government would continue developing nuclear bomb and missiles by showing off new weapons like new missile in the military parade. It is the strategy of media and image making in their own way.

However, even if the Japanese media in Pyongyang report “celebrating mood without tension,” the reality is absolutely different. The militia organizations have been mobilized for vigilance from the early April and the ordinary people have also been forced to join military drill every day. It seems that the order to shoot drones remains in effect from March.

-As the joint drill of US and South Korean military continues, we are nervous about a war tobe imminent. Orders to prepare mobilization were given to organizations and enterprises. Reserve Army, Red Army of Laborers and Peasants, and Army of Red Youth started drills. It is urgent drill of civilian military power.

Q: How is the drill going on?

- Surveillance by turns in trenches. The reserve army dig the trenches and live there. Sometimes they can’t go back home. I think this is more serious than the previous preparation for the quasi state of war (the North Korean government put on alert after the nuclear test on February 2013). Even though the members of reserve army are mostly factory laborers, they are ordered to continue drills, not allowed to go back to their factories as the situation is so serious. Anti aircraft guns with live ammunitions are ready to shoot at any time if order given. Authority was given to officers to shoot drones at their discretion. There will be a live ammunition drill of Red Army of Laborers and Peasants tomorrow.

Q: It must be hard time for the mobilized people.

- Needless to say, it is strenuous. The members of the Reserve Army should prepare half of foods needed by themselves for the period of the drill. It is tough! As the tension is seriously mounting at this time, the excuse of sick leave is not allowed. No exception for everybody. An officer who had a key for an arsenal was 30 minutes late. He was fired at the site immediately. It was warlike atmosphere.

As the authority is making a great fuss that a war is imminent, many people say “If so, it should be really good that a war breaks.” Close acquaintances at market agree with the saying, “Isn’t it better to wage a war than to live like this?” It should be those in the upper level who would suffer the most.

According to the reporting partners, even if the markets are still open, the business is shrinking as the law enforcement like the security agency (secret police) intensely tightens the control over the market. The common people are robbed of their time for forced guard drill. Their resentment is highly mounting.

Facebook Twitter はてブ Pocket Feedly
RECOMMENDATIONS
North Korea’s Second Wave? (2) Faced with Starvation, Soldiers Stuck on Base Plead to be Quarantined with Better-Fed COVID Patients
(Continued from part 1) What is the coronavirus situation in North Ko...
Rimjin-gang English Edition for iPad App
Rimjin-gang (NEWS FROM INSIDE NORTH KOREA) First English Edition Now a...
[Video Report] Tighter Sino-North Korean Border Control During Last 20 Years
The border between China and North Korea has been tightened during the...
● Media Reviews
2014/Nov(UK) The Rory Peck Awards The Finalist Feature Winner 2014 201...
North Korea Under Strict Coronavirus Watch Again, Military Soldiers Ordered to Stay on Base
North Korean authorities are increasing their measures against coronav...
N.Korea Food Shortage: Not a matter of absolute shortage, a matter of distribution and access -1
Not a matter of absolute shortage, a matter of distribution and access...
＜Inside N. Korea＞ "Our expectations were foolish"...Trade Officials Disappointed by Breakdown at Hanoi Summit
◆It would have been better to threaten the U.S. than to have the summi...
＜Inside N. Korea＞ Digital Dictatorship: Top Leadership Forced to Take Computer Classes as Kim Jong-un Orders Officials to “Keep up with the times”
The North Korean authorities have recently ordered senior officials in...
〈Photo Report- 8 (b) 〉 The Best Department Store in Pyongyang - But the Products on the Shelves are Not for Sale (2)
2013/July/03 Report byGu Gwang-ho(Original Report - Sep, 2011) <&lt...
Living in Pyongyang - The Real Story (3) Pyongyang City Shrinking
2013/August/11 Speaker： GU Gwang-ho,Rimjin-gang reporter Editors：ISHIM...