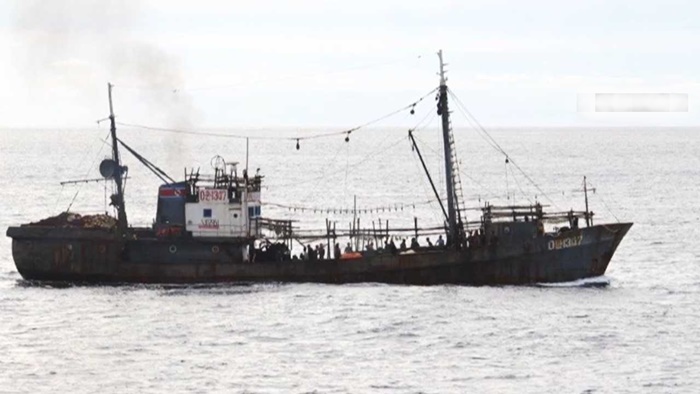 The North Korean fishing boat which sank after colliding with a Japanese patrol vessel. Photographed on October 7, 2019 by the Japanese Fisheries Agency

In the East Sea, North Korean fishermen catch squid during 2 seasons: the early summer period and the autumn- from September to November. The seasons ends when weather conditions in the East Sea deteriorate, with North Korean vessels having no choice but to return to harbor. These days, with the end of the season fast approaching, it is speculated that North Korean fishermen are navigating to Japan’s exclusive economic zone (EEZ), as the waters are a rich fishing ground for catching squid in a hurry.

Squid catching is a lucrative business, with most of a boat’s catch exported to China. Due to economic sanctions, however, the country has not been able to export seafood since 2017. With fishermen unable to sell their catches, the squid industry took a major hit, leading to record low catches in late 2018 and early 2019.

In mid-June, however, Chinese President Xi Jinping visited North Korea and had a change of heart. Marking a shift in policy, the crackdown on smuggling at the North Korean-Chinese border was loosened.

Japan’s rich fishing ground in the EEZ lies roughly 400 kilometers from North Korea’s eastern shoreline. Therefore, in order to recoup the losses from the cost of fuel, the North Korean fishermen must be able to export their catches to a foreign market. With North Korean fishing boats making the lengthy journey to illegally fish in the EEZ’s of Japan and Russia, it is clear that squid is once again being smuggled into China.
Next page : Kim Jong-un’s new orders, following the disgrace of ‘ghost ships’ drifting to Japan...