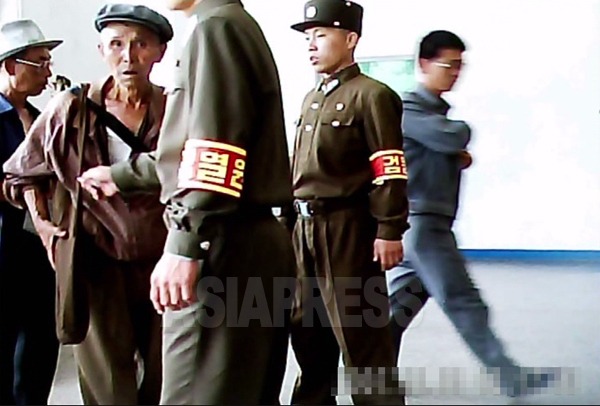 The North Korean authorities reportedly deployed the Ministry of State Security Command to Hoeryong City, North Hamkyung Province in early August in an attempt to clamp down on crime in the area. Over the last month of the crackdown, there has apparently been a large number of arrests, as the authorities have sought to root out organized crime and combat drug traficking and prostitution. Reporting partners across various regions of the country contributed to this report. (Kang Ji-won)

News of the Social Security Ministry Command being deployed to Hoeryong quickly spread to nearby cities, raising tensions and causing residents to fear that the command may be deployed to their region next.

A reporting partner explained the situation in Hoeryong thusly, “Social Security Command officers dispatched from Pyongyang have formed investigation teams in cooperation with local police and secret police bureaus. Residents are afraid because they do not forgive even the most minor of infractions and ruthlessly pursue investigations. They do not accept bribes at all.”

But why have Social Security Command officers been deployed to Hoeryong, a city located near the Chinese border? The rationale behind the decision was perhaps linked to the increase in crime that has resulted from the worsening local economic situation.

◆ Increase in daily crime and prostitution

To prevent the influx of the coronavirus, North Korean authorities sealed off the Chinese border in late January. Due to the resulting restrictions placed on movement and logistics, the domestic economy has rapidly deteriorated and many people have struggled to deal with the loss of their cash income. As a result of these circumstances, crime has risen in many local areas.

Another reporting partner B from North Hamkyung Province explained the extent of the issues faced by the local population, saying, “There has been an increase in drug use, prostitution, and theft. Even though there is no money going around, more and more people are using stimulant drugs. The drugs are being sold in small increments of 0.1 grams. There have been many women placed under arrest.”

So why did the authorities’ response begin in Hoeryong? According to the aforementioned reporting partner A from the area, “The production of the stimulant drugs was originally concentrated in Hamheung and Pyeongseong, however, in recent times, there has been much production in Hoeryong, closer to the Chinese border. Also, local crime- drug trafficking and smuggling to China and prostitution has become organized.”
※ Hamheung and Pyeongseong are major cities in the central region of the country and, as they are home to chemical factories, the cities were used as hubs for the manufacture and distribution of stimulant drugs.
NextPage: ◆Residents subjected to ruthless investigations...

1 2
Facebook Twitter はてブ Pocket Feedly
RECOMMENDATIONS
＜Inside N. Korea＞ “Information was sold beforehand to the Americans”...Rumors Spread of Executions as Regime Shifts Responsibility for Failed Hanoi Summit
◆ They say the reason for failure was that “Information was sold to th...
Polling Stations Under 24 Hour Surveillance As The Station's Notice Boards Vandalised
The Forthcoming Election in North Korea: 2014/March/07 Written byISHIM...
University Students Are Bored With Formal Uniforms - Women Wearing Shorter Skirts As A Sign of "Rebellion"
The Daily Life of North Koreans2014/April/16 Written by PAEK Chang-ryo...
＜Inside N. Korea＞ Critical Condition: Bank Begins Disinfecting Bills as Coronavirus Causes Local Currency to Sink and Prices to Soar
North Korean authorities reportedly ordered the central bank to begin ...
＜Inside N. Korea＞ Rumors of Outbreak Spread: Was a Trade Official Executed for Trying to Escape Quarantine?
◆ Warning: Those who violate state measures shall be dealt with accord...
＜N.Korea Crisis＞ Why is there a Food Shortage Crisis in the Breadbasket Region of Hwanghae? (PART3)
2012/May/11 Written by LEE Jin-suFarming Villages' Crops Usurped by th...
＜Inside N. Korea＞ Another year, another outbreak of Typhoid fever in the North
◆Outbreak caused by state negligence and unsanitary conditions Typhoid...
＜Inside N.Korea＞Enormous Flood Damage at Tumen River Basin, Outcry over No Relief Efforts by Government
2016/Sept/12 A huge flood deprived a lot of lives at Namyang Laborer ...
＜Inside N.Korea＞ Interview with Two N.Koreans: Shock and Horror on Assassination of Kim Jong-nam
2017/Feb/18 The news that Kim Jong-nam, a half brother of North Korea...
＜Inside N. Korea＞ Homework and Housework: Children Forced to Do Chores and Study From Home with All Schools Closed Due to COVID-19
◆ Families become desperate as economic threat looms larger than risk ...