The launching of the 12 years compulsory education system seems like a step in the right direction, but it has left parents in some regions of North Korea far from pleased.
The North Korean state implemented a new educational system beginning April 1. The new system extends the number of years a student must attend school from eleven to twelve years. It was determined at the 6th session of the 12th Supreme People's Assembly, held last September.

State authorities announced this reform as, "a vital measure which is a compilation of Comrade Kim Jong-un's sublime perspective for the fatherland, posterity and future," and repeatedly propagandized the reform in the state-run media. Parents, who might be expected to welcome such a decision, seem at best lukewarm to the idea. Suffering from ongoing budget troubles, schools frequently ask for financial support from parents. Despite the new reform, demands from the schools for extra financial support from the parents of students have not ceased. Before the new semester even began, in April this year, the school administration was asking parents for money on every count. 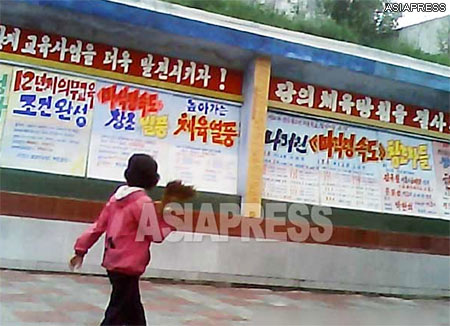 A public board filled with slogans praising the implementation, by the Kim Jong-un administration, of a new system of twelve-year compulsory education. (August 2013. Photo capture from the video footage filmed in a northern city of North Korea)  ASIAPRESS

"The school administration currently holds frequent meetings with parents to facilitate the smooth implementation of the new system. However, parents are getting annoyed with unreasonable demands. The administration asks parents for financial support, as they claim it is necessary to buy an LCD television and a computer in accordance with the new system. Teachers stretch the truth, claiming that these are the minimum necessities required for the classroom, and if they can't get this equipment, children won't be provided with the right kind of environment for their study. Other purchasing requests on their list include a magnetic blackboard and a solar-panel for generating energy, since they say the school is suffering from a chronic power supply shortage."

Our reporting partner explained the amount that the school administration demanded from the parents.

"In our region, with the implementation of the new system it is required that parents pay 40,000won (=around 5.30 US dollars) per pupil. The administration collects the money from students in each class. If you have two kids, 80,000won is required. Before the start of the new semester, the school pressured pupils to bring the money. The effect of this, in some regions, has been to force many parents to keep their children at home, rather than sending them to school." 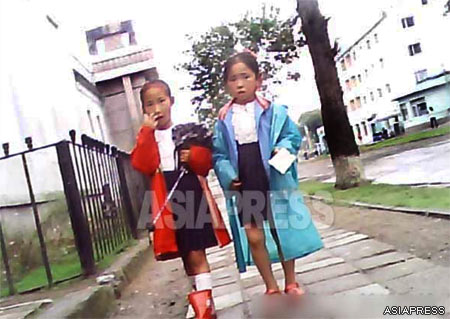 It is becoming more of a burden for parents to send their children to school as the educational administration demands more money from families to pay for new school equipment. (September 2013. Photo capture from video footage filmed in a northern city of North Korea) ASIAPRESS

The funding requisition of 40,000won is a stretch for parents, as the market cost of a 1kg bag of rice costs arond 6,000 - 7,000won. For families living in rural areas, this burden is likely to be even harder to bear.

The state does not fully support rural education institutions and, as such, they constantly suffer from a lack of finances, facilities and equipment. In response to the ongoing dearth of necessities, local school administrations attempt to generate the funds themselves, mainly by shifting the financial burden from the state to the parents of students. It has, for a long time, been a common feature of North Korean society that families residing in the same neighborhood would help each other by passing on used textbooks and stationery in an effort to continue their children's school life. Extra demands, such as those we see following the implementation of the new education system, however, are beyond the means of many rural families. In addition to the growing financial demands of the schools, the educational administration continues to require parents and pupils participate in compulsory social labor activities.

Facebook Twitter はてブ Pocket Feedly
RECOMMENDATIONS
＜Inside N. Korea＞Death Toll Rising: The Serious Humanitarian Crisis in North Korea is a Man-made Disaster. ISHIMARU Jiro
People are dying. People are dying for lack of food and medicine. Thi...
Kim Jong-nam: Image of Nice Guy Created by Media
2017/Feb/27 On the late night of February 17, the following day of th...
＜Inside N. Korea＞ Regime Maintains 8 Year Enlistment Policy but Shifts Focus to Training University Graduates for “Scientific Warfare”
A domestic investigation conducted by ASIAPRESS has revealed that the ...
● Media Reviews
2014/Nov(UK) The Rory Peck Awards The Finalist Feature Winner 2014 201...
＜Inside N. Korea＞ Birthday Ban: Why N. Koreans were forbidden from raising a glass to Kim Jong-un
2019/Jan/10 ◆ Is Kim Jong-un portraying himself as a ‘humble’ leader?...
＜Inside N. Korea＞ Kim Regime’s Crackdown on Individual Business Activities Begins: Ruthless Confiscation of Goods Forces Traders to Consider Defection
The move to curb individual economic activity has been gaining momentu...
"Our Life in Pyongyang Is Not So Easy As You Imagine" - Even in the highest quality apartments in Pyongyang running water is irregular and unreliable
Rimjin-gang 2014/January/20Even in the highest quality apartments in P...
＜Inside N. Korea＞ Power Struggle: Fearing Collapse of Power Grid, Regime Orders Crackdown on Electricity Bribing
Reports are coming in from all regions of North Korea that the power s...
＜Inside N. Korea＞ Military Cuts (Part 2): Frustrations Rise Amid Forced Deployment of Discharged Soldiers to Farms and Coal Mines
The Kim Jong-un regime has decided to drastically reduce the number of...
＜Inside N. Korea＞ Investigating the Cause of the Suspiciously Rapid Appreciation of the N. Korean Won
It was at the end of October that the abnormality was detected. The ex...