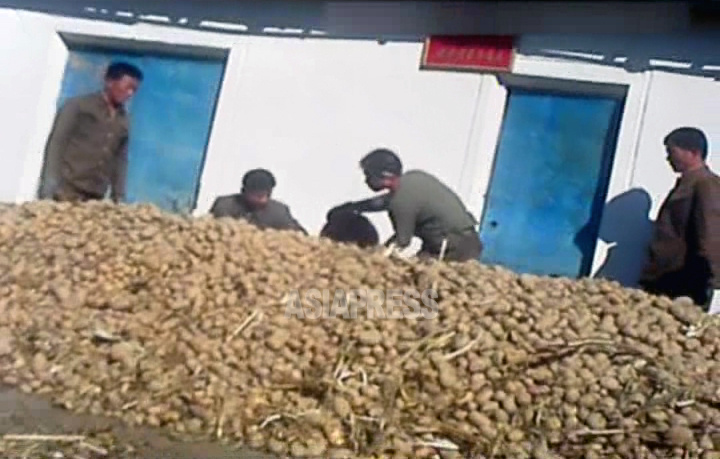 Potatoes are piled in a heap near a market. Photograph taken in Hyesan City in November, 2012 (ASIAPRESS)

Amid news of poor rice and corn harvests across various parts of North Korea, potatoes seem to have made a comeback. After an unusually productive harvest, the market price of potatoes has dropped to 700 won (about 0.1 USD). Taking advantage of the huge harvest, the authorities have given orders for workers across the Ryanggang Province to be provisioned with rations of potatoes. Many workers, however, are unhappy with this decision.

In mid-October, a reporting partner living in Ryanggang Province said, “In late September, authorities began mobilizing workers from the commercial and public sectors to dig potatoes on cooperative farms. It is being said that, for the next 6 months, rations will be distributed solely in potatoes. The distributions have already begun, with potatoes being provided first to the education and health sectors.”

There are a few problems, however. Besides the difficult field work, transport to and from the cities is an issue. Due to labor shortages on farms, workers must be brought in to help dig up potatoes.

In addition, cooperative farms lack vehicles and fuel, requiring workers, at the direction of authorities, to pay for their own transportation. As individual transportation costs can rise up to 100 Chinese won (about 13.6 USD), there have been many complaints.

The reporting partner explained, “Recently, laborers have been given 18-20 kilograms of potatoes each as a one-month ration. Over the course of 6 months, this will total 120 kilograms. The cost of transportation to the farms, however, is the equivalent of buying 120 kilograms of potatoes at the market. As such, laborers are strongly opposed to the distribution, complaining, ‘They call it a distribution, but aren’t we just being sold these potatoes?’ There are even some who are refusing to receive the distributions in lieu of cash, causing a headache for officials.”

Across most of North Korea, the food distribution system collapsed in the 1990’s. Nowadays, the reality is that almost all North Koreans make a living through private market activities. Many are now, in fact, wary of the state reviving the food distribution system, as they fear it will lead to future limitations placed on private economic activity. It is yet unknown, however, whether potatoes will be distributed outside of Ryanggang Province.

Potatoes are a popular side dish in North Korea but, until recently, they were in very short supply- behind rice and corn. For reference, as of mid-October, the market price per kilogram of domestically-produced rice was 5,366 won (about 0.67 USD) and 1,600 won (about 0.2 USD) for corn. (Kang Ji-won)