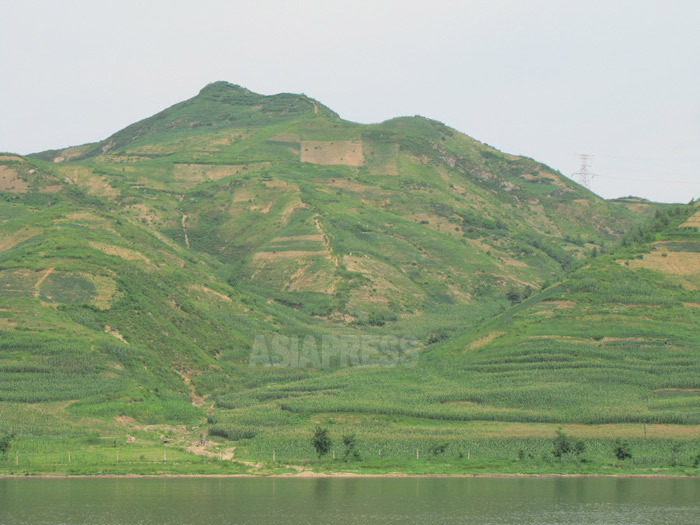 A mountain in Musan County, North Hamkyung Province. Since 1996, the number of newly erected tombs in North Korea has been increasing. This can even be observed from the Chinese side of the border. Photographed from China in August, 1997, by ISHIMARU Jiro.

Back in early April, the North Korean authorities placed an indefinite ban on burials, forcing residents to relocate existing tombs and to cremate the remains of relatives.With the deadline for relocating graves set for June 15, the authorities told residents that any remaining tombs, aside from those deep in the mountains, would be demolished to make room for farmland. In mid-June, with the deadline fast approaching, residents rushed to exhume the tombs and bring their ancestors’ remains to crematoriums.

As the North Korean authorities impose the practice of cremation in the name of securing farmland and restoring forests, the country’s funeral culture and tradition of ancestral rites is being forced to change. A reporting partner living in Ryanggang Province, speaking with ASIAPRESS on September 9, said, “The sight of food laid out for Chuseok will become a thing of the past.”

Cremations are performed at crematoriums operated by city or county ‘building management offices’. In Ryanggang Province, the fee for cremations is 300 RMB (about 50,000 South Korean won). In addition, ashes can be stored at the building management office’s mortuary for a fee of roughly 5,500 won a year. However, many residents elect to cast the ashes into rivers or from the top of mountains. Notably, it is forbidden to cast ashes into the Yalu River.
Next page : “Some people pile stones along the waterfront to mark the site as a place for mourning..."

Next Page
1 2
Facebook Twitter はてブ Pocket Feedly
RECOMMENDATIONS
＜Inside N. Korea＞ Would a visit by the Pope bring freedom of religion to North Korea, a country where even fortune-telling is illegal?
In early October, an unusual public event took place in Hyesan, North ...
[Video Report] Kotchebi Girls, Sexually Abused and Exploited
The mid 90s’ were a chaotic period for North Korea. During this time ...
＜Inside N. Korea＞Farmers face very difficult conditions with food shortages causing rampant starvation…Labor shortages mean many farm fields remain unweeded and unplanted…Crop yields are down because of recent droughts
The Kim Jong-un regime acknowledged an outbreak of COVID-19 on May 12....
＜N.Korea Crisis＞ Why is there a Food Shortage Crisis in the Breadbasket Region of Hwanghae? (PART1)
Written by LEE Jin-su2012/May/07 Possible reasons other than a simple ...
＜Inside N. Korea＞ “Chinese Forces Preparing for Regime Collapse?”...Police Chase Down Source of Rumors as Popular Dissent Snowballs
2019/May/7 ◆ Rumors bely a serious deterioration in living conditions ...
＜Photo Report＞ Abandoned Elderly (PART5) The elderly Treated Useless in N.Korea, the Land of Courtesy toward the Elderly
2016/Nov/07 Koreans respect the elderly, and North Koreans were not a...