This video image reveals the critical situation of the People's Army.

It was taken by Gu Gwang-ho, a North Korean working as an undercover reporter for Rimjin-gang.
The video was recorded in July, 2011, in South Pyongan Province. In a small square near the market, a group of around ten young men, all soldiers, are sitting; all look seriously debilitated. Their cheeks are sunken; arms, legs and trunk shapes are obviously skinny which can be easily recognized even while wearing their military uniforms.

Some of them are looking at nothing with out-of-focus eyes, and some are utterly absent-minded. There is a soldier who can hardly move his body. 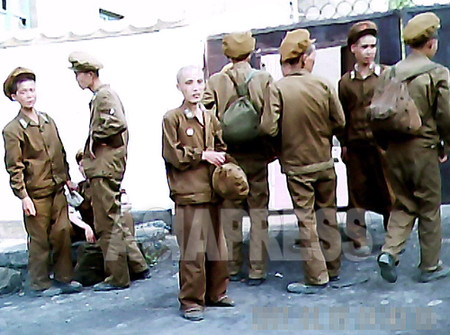 A group of young soldiers who are going to be transferred to the rear-echelon because of malnourishment. Some skinny soldiers stagger and can hardly walk. The troop commander told them to stay behind the wall so as not to be seen by the public. (Taken by Gu Gwang-ho, July, 2011. South Pyongan Province) ASIAPRESS

When I received these 30 minutes of footage from Gu in China, he told the story.
"It was painful to see such a group of emaciated soldiers. They were obviously malnourished."
Gu approached the group commander and tried to ask where they were going to be taken, but he was not successful. Gu conducted a couple of interviews with local inhabitants to get information.

"These malnourished soldiers looked to be around their early 20s, but the group commander told me that some were even younger," Gu said.

In the other part of the footage, a military policeman observing the unit was telling soldiers to stay behind the walls. It seemed the unit commander had an order that the group should not to be seen by local people while transferring the malnourished soldiers. Gu added that these soldiers won't live long since they looked seriously ill.

"It is not unusual to see soldiers die of malnutrition. The family receives the death announcement when their son in service dies of disease. They easily recognize it was because of malnutrition because the body is wasted away to skin and bone. This kind of story spreads around quickly. So everybody knows about the situation in the People's Army." 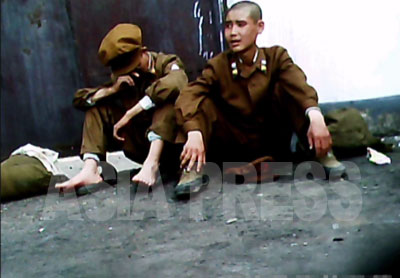 Some troops even suffer for the procurement of salt. In response, the military has launched a massive campaign of seizing rice. On the other hand, many people have lost their source of sustenance since the disruption of food rations.

People try to earn their basic standard of living by purchasing food with cash they earn from doing private business. In the current situation of food shortage in North Korea, one needs to differentiate between the ordinary people who can somehow earn their living and soldiers whose lives rely on the government.

Then the question rises - Why does malnutrition occur in the military even under the state's "military-first policy"?
There are two major reasons.

Firstly, the government is not able to ensure that there is enough food to maintain the People's Army. Military rice is basically procured by domestic production, such as delivery from cooperative farms and harvests from military-owned farm fields. If the amount is insufficient, then the shortfall has to be imported or purchased from the domestic market under the responsibility of the state. But the state cannot manage it because they don't have enough money.

Secondly, the government has not been successful in preventing the embezzlement and illegal sale of military foods and materials in the market by high ranking officials of the military.Officials are making a large profit through the illegal sale of food rations which have a material cost of zero. While military goods are skimmed off by the private moneymaking schemes of officials, most of the troops are required to make a "self-solution".
This means that troops have to solve the scarcity problem themselves.

The state cannot afford to procure the necessary materials, such as gasoline, to maintain military activities, so again military goods and rice are illegally sold to earn cash to buy other necessary items for the troops. The malnourished soldiers recorded in this video are proof
of the destabilization of the government which cannot run the military, North Korea's most important state organ.