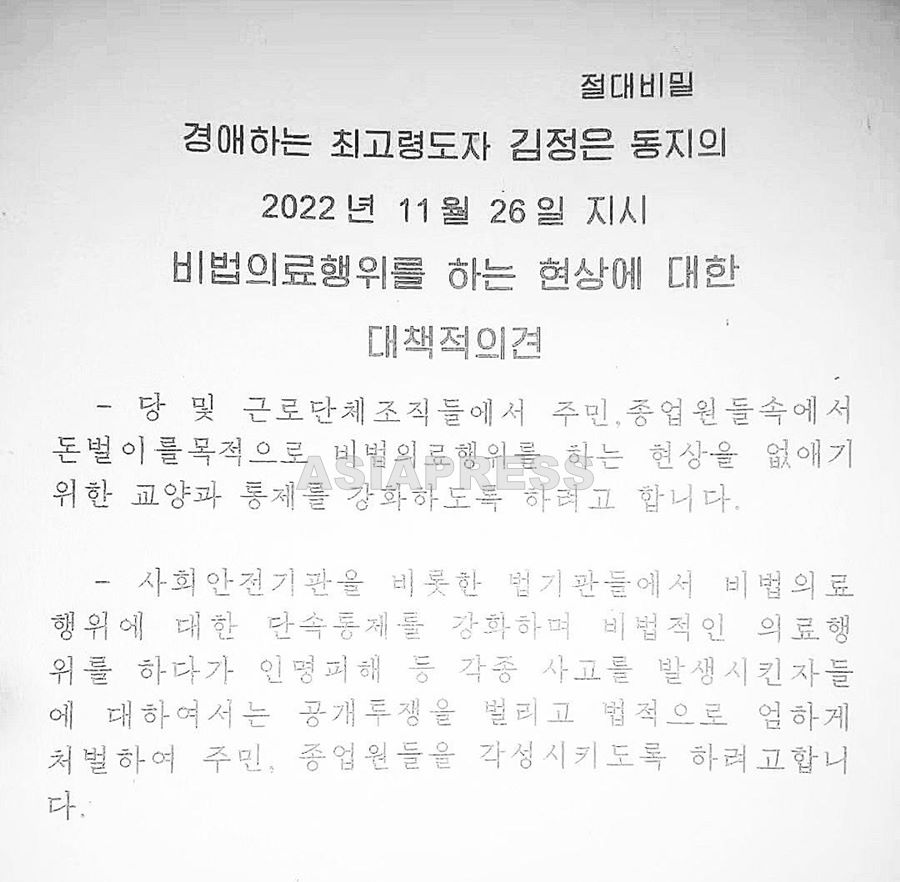 A photograph of the document recently obtained by ASIAPRESS. The spread of “illegal medical activity” is due to the dramatic fall in Chinese medicine imports stemming from North Korea’s overreaching anti-coronavirus policies.

North Korea has seen a collapse in its medical system due to a severe lack of medications. The country’s people have been forced to rely on traditional Chinese medicine such as acupuncture and cupping to treat their illnesses. However, there appears to have been cases where patients have been harmed due to inexperience home remedy practitioners. In November 2022, Kim Jong-un ordered the elimination of “illegal medical activity,” which has led the authorities to mount a massive crackdown on such activity. ASIAPRESS recently obtained a document labelled “top-secret,” and will now reveal the key points of the document along with results from a recent survey of the situation by reporting partners in the country. (KANG Ji-won / ISHIMARU Jiro)

North Korea’s crackdown on traditional Chinese medicine practitioners turned more serious in December of last year. However, full-fledged efforts to crackdown on such activity started in the early days of 2023. A reporting partner in Yanggang Province provided the following report:

“We were given a strict notice by the authorities not to get treatment for our illnesses and that an order (regarding this) had been handed down by Kim Jong-un. They say that anyone conducting acupuncture, cupping or any other similar type of medical treatment will be sent to a forced labor brigade. People are even banned from going to see practitioners for treatment.

“The notice explained that a person (in the southern part of the country) who had only been trained through books conducted acupuncture on a child, which led to the bursting of the child’s intestine. There are frequent cases of inexperienced practitioners causing medical incidents in Yanggang Province as well.”

※ A "forced labor brigade” is a "short-term forced labor camp" where those who are deemed to have disturbed the social order, disobeyed the authorities, or committed minor crimes are detained without judicial procedures and sentenced to forced labor for up to one year. These camps are in cities and counties throughout the country and are managed by the security bureau (police).

◆ Lack of medicine leads to popularity of home remedies

While acupuncture and other traditional Chinese medicine practices have been practiced by unlicensed practitioners for a long time in North Korea, demand for such remedies increased significantly following the start of the COVID-19 pandemic in January 2020. Chinese medicine stopped entering the country after the Kim Jong-un regime halted almost all trade with China, and people suffering from illnesses began relying on alternative remedies to find relief from their symptoms.

“There are four people who conduct acupuncture within my neighborhood watch unit. None of them are experts. They simply studied with books or learned from experienced practitioners. (In May 2022), when COVID-19 was spreading heavily throughout the country, these people earned quite a lot of money. The cost of one acupuncture session is 5 yuan for those with little experience, while those with a lot charge 10 yuan. A lot of people are relying on them for treatment because there’s no medication available. Even cadres are asking them for help.”

※ Neighborhood watch units are North Korea’s lowest administrative units. They are typically made up of 20-30 households.
※ One yuan equals around 184 won.

◆ What does the top-secret document say?

ASIAPRESS recently obtained a top-secret document that contains Kim Jong-un’s orders to crackdown on home remedies for illnesses. The document is entitled, “The Respected Supreme Leader Comrade Kim Jong-un’s Order of November 26, 2022, Regarding the Phenomenon of Illegal Medical Activity.”

After having received the order to eliminate “illegal medical activity” from Kim Jong-un, the Workers’ Party appears to have disseminated it to state-run company cadres in the provinces. Key parts of the document are quoted below. Areas with parenthesis have been added by the editor.

(The government) aims to strengthen education and controls with a view to eliminate the phenomenon of people earning money through illegal medical activity in the Workers’ Party, labor organizations, and among ordinary people and employees.

“The Ministry of Social Security (the police) and other law-and-order agencies will strengthen their crackdowns and controls on preventing illegal medical activities with a view to make it clear to ordinary people and employees that anyone who has caused harm to patients by conducting illegal medical activities will face a public struggle (denunciation rally) and be severely punished under the law.

Why is Kim Jong-un making an issue about eliminating home remedies? It may be that since many people have been harmed by practitioners, the North Korean leader has no intention to just stand by and watch people conducting medical treatments outside the purview of the state-run medical system.

A reporting partner told ASIAPRESS in regards to the major crackdown on illegal medical activity that, “People who have practiced home remedies are keeping up with their medical practices by avoiding the attention of the authorities. Ordinary people are worried about not being able to receive acupuncture treatment when they’re sick.”