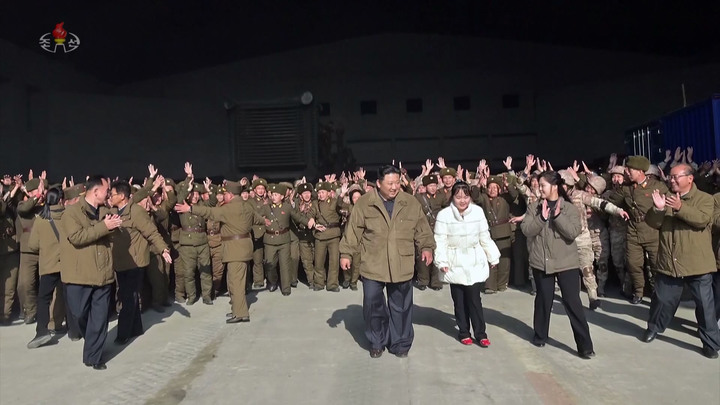 Cadres showing enthusiastic support for Kim Jong-un, who visited the testing site for the Hwasong-17 with his daughter. Published in the Rodong Sinmun on November 20, 2022.

Starting in late 2022, the North Korean government has been conducting a major shake-up of personnel in regional administrative agencies, state-run companies, and Workers’ Party organizations. North Koreans are expressing surprise at the noticeable increase in young people being appointed into official positions. (KANG Ji-won / ISHIMARU Jiro)

“The government appears set to completely replace even those cadres who were considered just a little problematic during this year (2022). Those leading the replacements are high-level cadres in the provincial party committees, and they are bringing in a lot of young people as mid-tier cadres. There are even young people who have recently been discharged from the military being selected for cadre positions, causing shock among many officials.”

There are generally two kinds of cadres who exist every organization in North Korea: cadres who deal with working-level administrative matters, and cadres affiliated with the Workers’ Party. All state-run enterprises and collective farms have party organizations. This recent shakeup in the party ranks focused mainly on administrative cadres; however, there appears to have been a considerable number of party cadres replaced as well.

“At iron factories in Hyesan, the party cell secretaries in their late 40s were largely replaced by younger people. There was even a newly appointed party cell secretary in his early 30s,” a Yanggang Province-based reporting partner told ASIAPRESS.

※ The lowest-level party organization in North Korea is called a “cell.” The head of a cell is a “cell secretary.” These kinds of organizations are commonly created in state-run enterprises.

◆ Is this all part of Kim Jong-un’s attempt to bring about generational change in government and party ranks?

Why did North Korea suddenly conduct this personnel shakeup? Reporting partners in the country gave the following explanations:

“The provincial party committee says that we need to identify talented people and cultivate them into those who can work effectively. That’s why the personnel shakeup was so audacious. That being said, (the new appointments) will, for the time being, be limited to only mid-tier cadre positions, not high-level positions with authority.

“The government is focused on appointing enthusiastic workers who are willing to take risks, rather than people who are concerned about what others think and are opportunists.

“Appointing young people (into cadre positions) is aimed at monitoring the implementation of party policies by the older generation, correcting things that have gone wrong, and encouraging competition (between the older and younger generations).”

According to the reporting partners, most of the young people who have been appointed to administrative cadre positions are “party members, college graduates, and former soldiers.” Given that these people would have been imbued with the values of the Kim Jong-un era, the regime likely aims to replace cadres appointed during the Kim Jong-il era.

However, people in many workplaces are not particularly happy about the appointment of young people into cadre positions. One of the reporting partners told ASIAPRESS:

“There’s a lot of people who are unhappy about dimwitted young people being appointed as cadres because there’s a belief that their lack of flexibility will lead to a stressful and tiring work environment.”

＜Related Article＞
Facebook Twitter はてブ Pocket Feedly
RECOMMENDATIONS
＜Emergency Interview＞Lockdown Death Toll Climbs in Hyesan: “We are Dying Due to Lack of Medicine and Food”
On February 15, the lockdown of Hyesan in Ryanggang Province, located ...
＜Inside N. Korea＞ Hunger hits the countryside ... the rise of 'hungry households' confounds authorities
◆Agricultural producers are starving 'Hungry households' is what they ...
＜Photo Report on N.Korea＞ Ex-Soldier Confesses “War Is Impossible for Hungry People’s Army!”
2017/Apr/24 The duty for a newly conscripted North Korean soldier is ...
＜Inside N. Korea＞Outbreak of “10-Day Flu” in North Korea: Authorities Restrict Attendance at Work Due to Lack of Medical Supplies
A malignant strain of influenza is spreading in North Korea. As the se...
＜Confidential Document＞ With the collapse of the medical system, Kim Jong-un orders crackdown on home remedies to treat illnesses…Why?
North Korea has seen a collapse in its medical system due to a severe ...
＜Inside N. Korea＞ Scarier than the police...Housewives turned “people’s units” leaders are now becoming more powerful as key resources used by N. Korea to control its population
Starting this year, North Korean authorities have increased the roles...