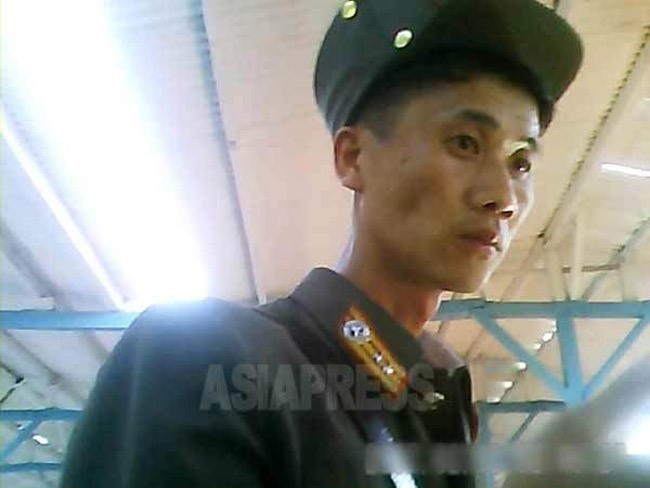 A thin-looking officer shops for groceries at a market. Photograph taken in Hyesan, Ryanggang Province, in August 2013 (ASIAPRESS)

With the Chinese border remaining sealed to block the spread of coronavirus, the North Korean economy continues to deteriorate. According to a reporting partner speaking from Ryanggang Province in early April, a growing number of North Korean citizens are now taking the risk of illegally crossing into China to smuggle or steal.

In late January, the Kim Jong-un regime sealed the border with China to prevent the spread of the coronavirus. As such, all trade was suspended. The daily commodities for which North Koreans relied upon Chinese producers to supply were blocked at the border. In addition, movement controls were also tightened, paralyzing all logistics.

In late March, trade at the border between Sinuiju and Dandong was partially resumed. However, the blockade, which was in place for over 2 months, had already dealt a serious blow to North Korea’s poorest classes, who had been making their living from trading and transporting goods.

In desperation, some have begun crossing the border themselves. For many, their objective is smuggling. The reporting partner explained, “With orders from merchants, the smugglers go across to buy shoes or clothing, miscellaneous goods, and cooking oils from counterparts on the Chinese side. With the coronavirus situation in China more or less settled, the border security forces have also relaxed their discipline. In fact, smuggling is being resumed with the soldiers’ cooperation.” According to the reporting partner, soldiers are starving as well.

As part of the regime’s coronavirus prevention measures, the North Korean authorities had earlier tightened control of the border area and warned that those caught smuggling or even approaching the Yalu River would be punished under military law.
Next page :High schools students cross into China to steal for their parents...

1 2
Facebook Twitter はてブ Pocket Feedly
RECOMMENDATIONS
N.Korea Food Shortage: Not a matter of absolute shortage, a matter of distribution and access -1
Not a matter of absolute shortage, a matter of distribution and access...
N.Korean Drug Trade Spreads to Ordinary Citizens (PART2)
2015/January/14 Written by PAEK Chang-ryong, a defector reporterHeavy ...
Individual transport of grains strictly prohibited ... Private distribution to cities and theft from fields to be highly punished
In North Korea, where harvest is in full swing, the government has dec...
＜Inside N. Korea＞ ‘Made in Kaesong’ is North Korea’s hottest brand ... unauthorized operations continue at the Kaesong Industrial Complex
In February 2016, it was revealed that factories within the Kaesong In...
＜Inside N. Korea＞ State Welfare: Citizens Forced to Enroll in State Insurance Plan to Prop up Government
◆Sanctions are working but the economic burden is being forced upon th...
Kim Yo-jung: Devoted Sister or Ambitious Second-in-Command? The Key to Kim Jong-un’s Crisis Strategy for Maintaining Family Rule
Rumors of Kim Jong-un’s critical health condition, which spread around...
＜Latest Report on N.Korea＞Another year of emaciated soldiers in N.Korea; Young Soldiers suffering with Malnutrition (Four Photos)
In late July, a reporter for ASIAPRESS was on a cruise ship on the Ya...
＜Photo Report on N.Korea＞ Soldier’s Hard Life 5. Poorly Nourished Young Soldiers: Soldiers’ hunger started from 80’s. (4 Photos)
◆ Hunger of soldiers started from 80’s.Lee Sang-bong, a defector from ...
“Please, Bury Me Somehow”: Forced Cremations Frighten Elders, Threaten Chuseok Traditions
Back in early April, the North Korean authorities placed an indefinite...
＜Inside N.Korea＞Enormous Flood Damage at Tumen River Basin, Outcry over No Relief Efforts by Government
2016/Sept/12 A huge flood deprived a lot of lives at Namyang Laborer ...