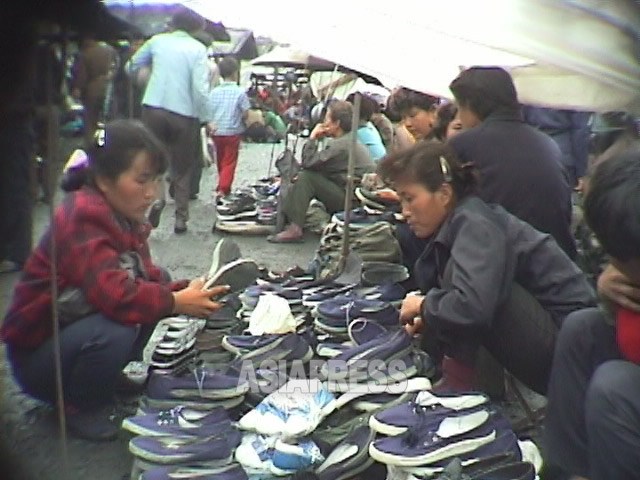 A number of farmer’s markets merged with black markets, which caused them to substantially increase. Industrial products also became prevalent in these markets. In October 1998 in Wonsan, Kangwon Province. Taken by Ahn Chol (ASIAPRESS)

◆ How did the expansion of the market economy take place?

In North Korea, a self-claimed socialist state, consumer goods except food and agricultural products are produced in state-owned factories.  Except some stores owned by social cooperatives, the state-owned stores provide citizens with most of the goods they need.  The “Commercial Management Office,” a state organization, is in charge of overseeing this commerce.

The Commercial Management Department under the Provisional People’s Committee of North Korea, which is a local administration, sold clothing, soap, cigarettes, tableware, beverages, alcohol and also vegetables and fish.   Apart from grain, which is a staple food, those other daily necessities and a wide variety of other foods were sold at a price fixed by the state.  In order to purchase them at the state-owned stores one needed to use a “food stamp” for foods like miso, soy sauce, beer and they had to use an “item stamp” for other general products.

Old defectors consistently testified that “the state-owned stores used to sell sufficient amounts of candies, soap, and fish until the early 1970s.  However, most of the food and other products had gradually disappeared from the stores by the 1980s. Around this time, when certain side dishes of food happened to be sold–which rarely occurred—everyone tried to thrust oneself through the crowd before they sold out.
Related Article: ＜Inside N. Korea＞ Market survey shows “Resolution 2270”, the toughest-ever sanctions, didn’t work

Staple foods such as rice and corn were produced at collective farms and sold at the “food management office,” the food distributing center, at a state-fixed price according to a 15-day cycle.  All people, workers, students, children, retired people, all had a specific quota per day.  People were strictly prohibited from selling and buying food privately.  The food rationing system in which the nation had total control over the food supply was called the “governance based on the food supply.” 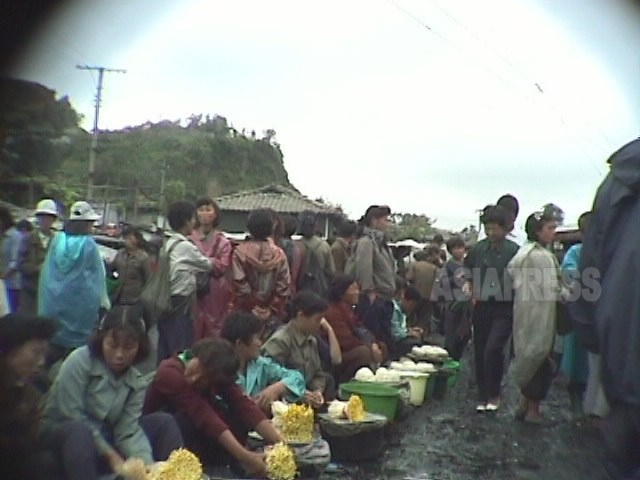 The collapse of the food rationing system made black markets the de facto center of commerce, attracting a huge number of people. Private businesses, once banned by the state, became unstoppable. Ladies selling bean sprouts. In October 1998, the period called the “arduous march”, in Wonsan, Kangwon Province. Taken by Ahn Chol (ASIAPRESS)

The black markets and “farmer’s markets” gradually became vibrant as the food rationing system deteriorated qualitatively and quantitatively. The products sold at black markets are imported from Japan and also the old belongings of former Zainichi-Koreans (ethnic Koreans who lived in Japan) who returned to North Korea through the "Homecoming Project” in 1959.  Also sold in the markets are the belongings of North Koreans who returned from the Soviet Union and the special gifts possessed by high ranking officers. Although it was called a market, the black markets at the time did not exist on streets. Trades took place via a middleman or by inviting a customer to one’s home.

On the other hand, there were also small-scale legal markets called a farmer’s market.  It started as a periodic market, held on the 1st, 11th, 21st, 31st, or 5th, 15th, or 25th, of every month, where people at the collective farms could only buy and sell certain kinds of food like eggs or vegetables produced in their home gardens.  Since other types of food were not allowed to be sold, secret selling of them would still occur.  Small farmer’s market, which merged with the underground black markets, started to openly operate during the chaotic period of the arduous march in the late 1990s.  From big cities to small ones, both saw the emergence of explicit black markets, which are known to North Koreans as the “Jangmadang”.  All kinds of food and products including prohibited ones such as grain are sold there.
Related Article: [Video Report] National bus network of the North Korean market economy

The black markets swiftly grew and started to sell items other than daily necessities.  The DPRK government did not provide factories in different areas with the necessary production materials like, fuel, and mechanical parts to produce any goods.  Those production materials were supposed to be given to them based on a national production plan, but with the collapse of the economy the factories turned to the black markets.  They started to obtain resources illegally and then sell their products in the black markets.  Han Jong-sik is a defector who used to be a professor at a university and was also a technician at a large state-owned factory in North Korea. He told me in 2004 that “In my workplace, a large state-owned company, the government did not provide any necessary materials like motors, electric wires, glass, nails.  We bought everything at the black markets.  If we could not find one at the nearest market, we went to different cities.  Then we were able to compare the prices and the product quality.  The communication among the black markets began, and North Korea itself became grew a hugely integrated market.”
Next page: 2-2 Government’s response–conforming the black markets...