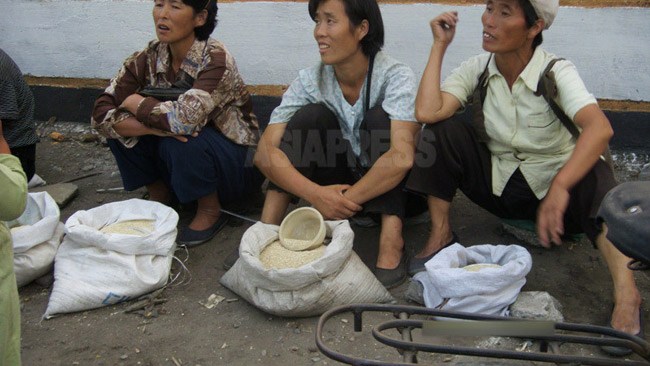 Ladies selling rice on the side of the road. Majority of the ordinary people in North Korea make their living out of small businesses. (at a suburb of Pyongyang)

For the last seven months, the ASIAPRESS reporting team has conducted a market survey on price inside North Korea. We have got in touch with our reporting partners living in different parts of North Korea and they have carried out a market survey of the prices of basic daily necessities such as rice, corn, gasoline, underwear, and shoes as well as the exchange rates for North Korean Won to US Dollar and Chinese RMB.

The North Korean government rarely reveals the statistical indicators of the financial and economic situation inside the country. It still hasn’t published the government budget. It is difficult for foreigners to visit cities in North Korea except Pyongyang and the Rason Special Economic Zone. Conducting a market survey allows us to get a rare glimpse of the North Korean economy.

In March 2016, the United Nations Security Council adopted the “Toughest-Ever Sanctions”, Resolution 2270, on North Korea following its fourth nuclear test in January. The sanctions include the prohibition of exporting aviation fuel to North Korea, denial of port access for North Korean cargo ships, requirement to inspect all North Korean cargo if there are reasonable grounds to suspect the violation of the UN resolution, and tightening further of financial sanctions. The sanctions intended to crackdown on the illicit flow of people, money, and materials contributing to the country’s nuclear proliferation. The resolution was not all bad for North Korea, it states that the import of coal and iron ore from North Korea is exclusively allowed for the purposes of livelihood.

ASIAPRESS predicted that the North Korean economy would be shaken due to the shortage of foreign currencies. As a result, inflation would occur if China—accounting for nearly 90 percent of the North Korean’s foreign trade—implements the sanctions.
Related Article: [Video Report] National bus network of the North Korean market economy

That’s why we have chosen to survey prices and see what kind of influence the sanctions have on the North Korean market.

For the past seven months the market price has been mostly stable in the northern parts of the country. The price of grain has even decreased. Towards the end of October, the prices of staple foods such as rice and corn are more or less stable.  The price of rice is 4500 Won per kilogram (around 0.5 USD) and corn is 1200 Won per kilogram (around 0.15 USD). The price of imported gasoline has also been consistent around 8500 Won (around 1 USD) per liter. (Reference to the graph) 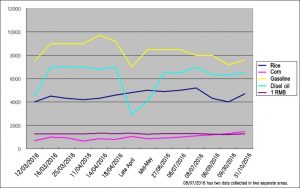 Price index graph. Per kg for food and liter for oil. The measurement is North Korean Won.

The exchange rates for North Korean Won to USD and Chinese RMB decreased down to one three-hundredth at some point, however, has been steadily increasing this year.  As far as the domestic markets are concerned North Korea hasn’t experienced any market issues from the lack of foreign currencies in spite of Resolution 2270, the “Toughest-Ever Sanctions.”

Passed in March, North Korea has ignored Resolution 2270 and forcefully conducted their fifth nuclear test on the 9th of September. Therefore, it is significant for every concerned country to implement the newly adopted sanctions. (ISHIMARU Jiro)