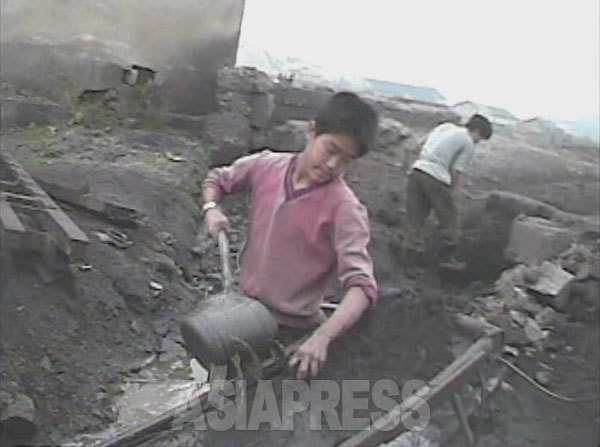 Multiple reporting partners have reported that a 45 year-old woman was beaten to death on December 5 in the northern city of Hyesan.

According to reports, the woman was beaten to death by a family that runs a goldmine near Hyesan. The victim’s 17 year-old son was working at the goldmine but came under suspicion of theft when the gold reserves were found to be smaller than expected. When the owners of the mine confronted their 17 year-old employee, the boy’s mother stood up for him. It was at this moment, apparently, that the owners of the goldmine assaulted their employee’s mother, beating her to death.

Hyesan city police dispatched a team to investigate the 5 members of the goldmine-owning family that were involved in the murder. Of the 5 suspects, however, only 1 was detained, with the other 4 suspects released. According to reports, the 4 released suspects told the police that the detained member of their family, the owner’s daughter-in-law, is mentally handicapped and was responsible for the woman’s death as they could not control her.

Neighboring residents, however, say they know the real story. They believe that the 4 released members of the family paid off the police with bribes and agreed amongst themselves to pin the crime on their mentally challenged family member.

Next Page： ◆Poor people perform hard labor to survive
1 2
Facebook Twitter はてブ Pocket Feedly
RECOMMENDATIONS
＜N. Korea Interview＞ "So the sanctions will continue?" North Koreans Face Disappointment as US Summit Breaks Down
◆“But we had been expecting the sanctions to be lifted…” On February 2...
＜N.Korea photo report＞A Look at North Korea's Impoverished Rural Women... Though they are producers they live in poverty due to exploitation
While North Koreans are very compassionate, there is one occupation th...
“Secondary school textbooks issued under the Kim Jong-un regime” DVD Book Now!
ASISPRESS collected 65 secondary school textbooks published under the ...
Profiles - ASIAPRESS N.Korea Reporting Team
Ishimaru Jiro Ishimaru was born in 1962 in Osaka, Japan. He is the Osa...
Delinquent Juveniles Mobilized For Forced Labor
The Youth Union(*), an umbrella social group of DPRK Worker’s Party, i...
＜Inside N. Korea＞ Market survey shows “Resolution 2270”, the toughest-ever sanctions, didn’t work.
2016/Dec/6 For the last seven months, the ASIAPRESS reporting team ha...
＜Inside N. Korea＞ Ban on privately operated restaurants
North Korean authorities have suspended the operation of private rest...
Discontent Over Special Rations and Criticism Towards Wasted Expenditures on the Launch
2012/May/04 Written by ISHIMARU Jiro, Editor in Chief, Rimjin-gangDesp...
＜Breaking News From North Korea＞ 3 People Shot Trying to Cross the Border into China, 1 Dead
In the northern region of Ryanggang Province, Kimjongsuk County, Nort...
＜Photo Report＞ Abandoned Elderly (PART1) Collapsed Social Welfare System Has Left the Elderly on the Streets.
2016/Jul/26 Children and the elderly are the biggest victims of the c...