The drugs being sold in North Korea are referred to as eoleum 얼음(which means "ice"). This slang name refers to a stimulant drug --- the chemical compound methamphetamine. It is also sometimes called bing-du, which is Chinese slang for "poisonous ice" 冰毒.

This fad for stimulant drugs is not something that started recently in North Korea. When the Chinese staff of our Rimjin-gang editing team visited Musan County in the North Hamkyung Province in August 2004, this is the experience they had. 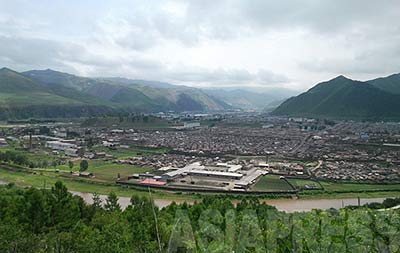 Musan County in the North Hamkyung Province, a border city with a population of more than 100-thousand, seen from the Chinese side. The river running from left to right is the Tuman-gang(Tumen) River. Chinese carrier mobile phones can be used in almost all parts of the county, making this a major base for outflow of information on North Korea by residents. (July 2012)  ASIAPRESS

"We stayed at several homes, including relatives, and we were shocked that there were people doing drugs in all the homes. A young couple working at a trading company in Pyongyang roasted white powder over a fire right in front of my eyes, and started to smoke it. On being asked, they said it was called "eoleum", and was good for getting rid of stress. After smoking the drug, they seemed refreshed."

The widespread use of stimulants is not limited to border areas. Our North Korean reporter in Pyongyang, Gu Gwang-ho, had this to say about a fad in Pyongyang in the fall of 2011.

"It is true eoleum is spreading. In particular, from around 2009, people who had been smoking in secret started to do so openly. My feel is that in Pyongyang, about ten percent of residents have probably experienced doing drugs. The ones doing it are rich merchants, or senior party executives for example high-ranking Workers' Party executives. Recently, when a good friend comes visiting to a private home, they are served eoleum together with an alcoholic drink. There are people who consider it to be a form of hospitality."

TO BE CONTINUED IN PART 3>>