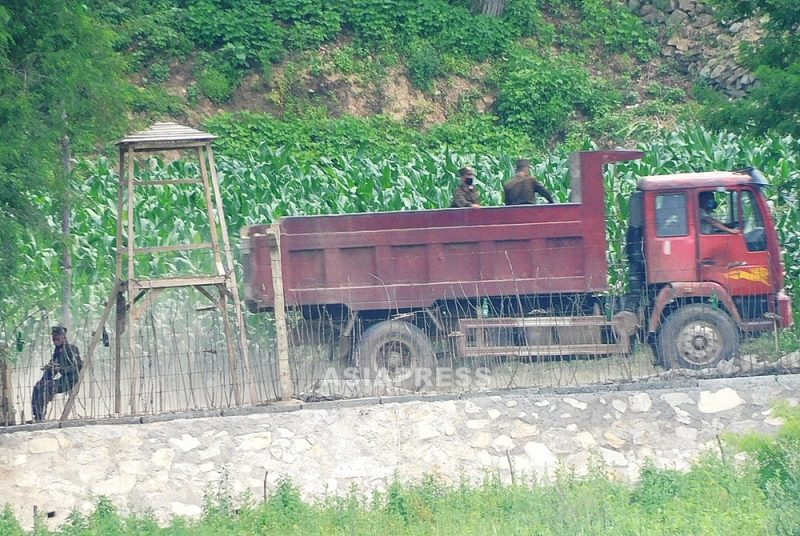 A checkpoint manned by North Korean soldiers and a dump truck on a road near the China-North Korea border. This photo was taken in July 2021 on the Chinese side of the border by ASIAPRESS.

◆ An increase in vehicles immobilized by the lack of parts

Throughout North Korea, the stealing of vehicle parts, including the mirrors and tires of parked cars, is rampant. After official cars of the Workers’ Party of Korea and state-run companies were victimized by thieves, the country’s Ministry of Social Security has started a massive crackdown throughout the country. The rise in the theft of car parts has been caused by the scarcity of the parts following the closure of the China-North Korea border because of COVID-19, leading to skyrocketing prices of car parts. (KANG Ji-won)

A reporting partner in North Hamgyung Province told ASIAPRESS in early May the following:

“A car that entered the county I live in near Chongjin on April 30 had all its tires and side mirrors stolen while the owner was sleeping at night. The vehicle was owned by the Chongjin party organization, which led the Ministry of Social Security to immediately hand down an order to find the culprit. Police officials conducted multiple house searches of people who do vehicle repairs to check and see if they had purchased any of the parts illegally.”

However, this case is just the tip of the iceberg. Robberies of car parts across the country has become so common that the Ministry of Social Security has put the full force of its organization into identifying the culprits and putting them in prison.

In principle, private individuals in North Korea are not allowed to own cars. North Koreans began purchasing trucks and vans from China in the 2000s to make money ferrying people and goods. They would pay bribes to register these imported vehicles as being owned by state-run enterprises and government agencies. However, the authorities began strongly cracking down on this business activity starting 3-4 years ago calling it “anti-socialist phenomena.” As a result, businesspeople have had to either pay fines or see their vehicles confiscated.

Currently, most vehicles in North Korea are made in China. Naturally, car parts are also imported from the country, but North Korea’s closure of its borders in early 2020 to prevent the spread of COVID-19 led to a drastic decrease in the supplies of car parts. The extreme scarcity of vehicle parts in the country has led to many cases where even vehicles owned by companies and party and government organizations cannot be driven anymore: when they break down, there’s no parts to repair them.

One reporting partner in the country told ASIAPRESS:

“Car parts go for whatever the seller asks for them. A single tire for a van can goes for around 2,500RMB (368USD). There’s many cases where completely immobilized cars are taken apart and their parts are sold.”

Next Page： ◆ All four tires can be taken off a car in just 10 minutes
1 2
Facebook Twitter はてブ Pocket Feedly
RECOMMENDATIONS
＜Interview＞ New year, old talk: What did North Koreans think of Kim Jong-un's New Year's address?
2019/Jan/16 ◆ “He repeated the same things as before...my attention d...
＜Photo Report＞ People are exploited in mobilized for forced labor (1) Urban view
2015/11/6 The reason North Korea can still sustain production and cons...
＜Inside N. Korea＞ A sergeant dies in the act (of stealing) ... Desperate soldiers raid smuggled goods to survive
◆State agencies involved in smuggling Hit hard by the United Nations' ...
N. Korean TV pixelates the image of the protest against Park Geun-hye. What do they want to hide?
Korean Central Television, a state-owned television service in North ...
〈Photo Report- 6 (b)〉 "Strong and Prosperous Nation" - The State Project to Build 100,000 Apartments in Pyongyang for the 100th Aanniversary of The Birth of Kim Il-sung
2013/June/18 Report byGu Gwang-ho(Original report : Aug, 2011) <&lt...
＜Inside N. Korea＞ Expansion of the market economy as the driving force behind social transformation--based on sources from inside N.Korea. (PART2)  The black market and “farmer’s market” connect. by ISHIMARU Jiro
2016/Dec/20 ◆ How did the expansion of the market economy take place?...