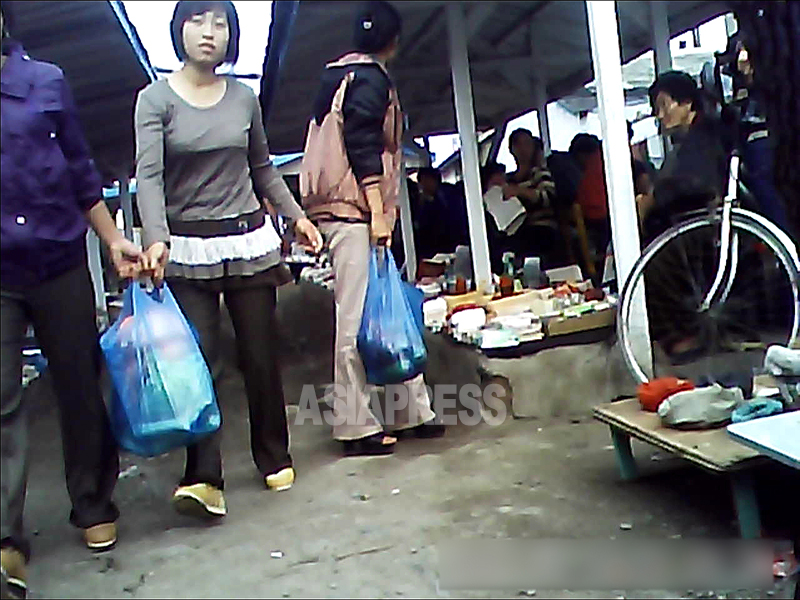 The market of Chongjin, the country’s third largest city. With the food distribution system all but collapsed, the majority of people survive through their private market activity. Photograph taken in Chongjin in September 2013 by ASIAPRESS.

Due to the chaos caused by the global spread of COVID-19, the issue of North Korea’s denuclearization seems to have fallen by the wayside. In North Korea too, the pandemic and its side effects have resulted in much turmoil. After a third year of strict economic sanctions imposed by the UN Security Council and a tumultuous few months due to coronavirus prevention measures, what is the current state of North Korea’s domestic economy?

On February 29, North Korea’s Chosun Central News Agency published Kim Jong-un’s statement that “if the infectious disease enters our country, it will have serious consequences.” The regime has responded with a strong sense of crisis, ruling as though under martial law. To get a sense of the regime’s response and, at the same time, understand the impact of the economic sanctions on the domestic economy, it is best to return to the beginning of the crisis, just after the outbreak of COVID-19 began in China.

With knowledge of the outbreak of coronavirus in Wuhan, China, North Korean authorities notified travel agencies of the suspension of tours on January 22, just before the Lunar New Year holiday. To block the coronavirus from entering the country, the regime decided to sacrifice its income from tourism, an industry not subject to economic sanctions.

In addition, trade was halted in late January, when the regime decided to block the Chinese border altogether, blocking exit and entry of goods and people entirely. Dating back to the beginning of January, the authorities were thorough in quarantining trade officials who had visited China as well as quarantining people in the country with Chinese contacts.

The North Korean authorities themselves must be aware of the limitations of its quarantine system. With a major lack of drugs, disinfectants, and testing equipment, the country’s quarantine measures would not be strong enough to stemie a rapidly spreading epidemic.

As of April 1, North Korean authorities have continued to repeat claims of “zero infections.” The authenticity of these claims, however, is unknown. ASIAPRESS contacts its reporting partners living in North Korea daily but they have neither been able to confirm nor refute the claims. ASIAPRESS partners did, however, report of rumors of infections in Pyongyang, Sinuiju, Rason, and Chongjin, saying that “the situation is serious.”
Next page :With no Chinese products coming in, inflation ensues...