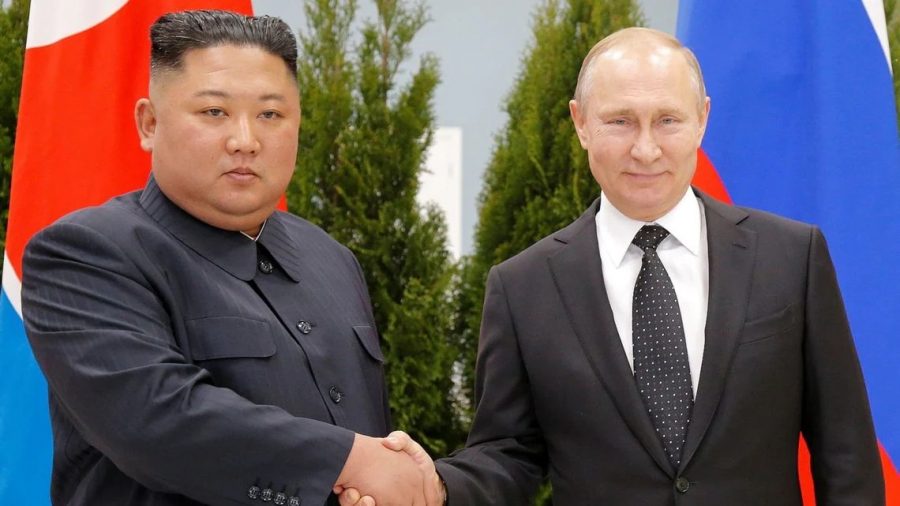 Photo (Rodong Sinmun)
Kim Jong-un visited Vladivostok in Russia’s Far Eastern Region by train in April 2019. It was the first and only time Kim met with Russian leader Vladmir Putin.

Putin is a frightening dictator. Over the past 60 days, the world has felt this down to the bone.

To achieve his aims to create a Greater Russia, Russian President Vladmir Putin has moved forward with his ambition to occupy the sovereign nation of Ukraine under ridiculous pretenses and is perpetrating great harm against the Russian people as well. The world has been shaken up because of a self-righteous, cold-hearted dictator with strong intentions. There is no remaining democracy or free press to suppress or place a check on Putin’s recklessness.

While watching the situation in Ukraine, I immediately thought of North Korea’s Kim Jong-un. From January to April 29, the country has conducted 11 missile launches. On April 25, a massive military parade was held in Pyongyang.

I watched the two hour and 19-minute video released by Korean Central TV of the military parade. The footage showed fireworks bursting in the night sky and fighter jets flying by. While the regime must have spent an enormous amount of funds on the event, I thought of something more serious than just all the waste of money: Kim Jong-un is a frightening dictator who does not hesitate to spend huge amounts of cash despite his country’s economic difficulties.

North Korea's COVID-19 prevention measures has created a severe economic downturn in the country due to the closure of its borders and heavy restrictions on movement. The Kim Jong-un regime is facing its worst humanitarian crisis in the past 10 years, with disadvantaged people dying of starvation in the country’s provincial cities. Despite this, Kim spends all his time showing off his authority and what he has achieved, along with the country’s weaponry.

Around the time that Putin’s war began, I received inquiries from several Japanese-Koreans. They had suddenly received long-distance calls from their relatives in North Korea.

They told me, “They (Our relatives) are living in hell. They’re asking for money. Is there any way to send some to them?”

Economic sanctions prevent people in Japan from using banks to send money to North Korea; however, it is possible to send a one-time payment of 100,000 yen (around 770 dollars) through insured mail for humanitarian reasons. In the past, whenever someone from Chongryon (The General Association of Korean Residents in Japan) came around there were many people who asked for ways to send money to North Korea.

Now, the North Korean government is not allowing anyone, including their own nationals, to return to the country as part of efforts to prevent the spread of COVID-19. It is no longer possible to send letters to the country, either. While one could use underground brokers to send money into the DPRK in the past, it is so difficult to travel domestically in North Korea due to travel restrictions that brokers can’t make it to the Chinese border to collect the funds anymore. I simply had to tell the Japanese-Koreans who asked for help, “It’s regretable, but I believe that sending money into the country is impossible until the COVID-19 situation eases up.”

During his speech at the military parade, Kim Jong-un made an important statement in regards to the country’s nuclear weapons. While repeating his claim that the country’s nuclear weapons are for preventing war, he signaled that the country could mount a preemptive attack, saying: “If any forces try to violate the fundamental interests of our state, our nuclear forces will have to decisively accomplish its unexpected second mission.”

I think that Kim is imitating Putin in this regard. When the Russian leader invaded Ukraine, he mentioned the use of tactical nuclear weapons. Security experts believe that Putin’s aim was to prevent the US and NATO from sending troops into the country.

Rather than learning that Ukraine suffered an invasion because it lacked nuclear weapons, Kim may have drawn the lesson that nuclear threats can prevent intervention by the US.

North Korea has long argued that its nuclear and missile development is for its own self-defense. The country’s repeated tests of ballistic missiles, however, is clearly over-the-top and aggressive. The regime is trying to protect the rule of the Kim family while its people starve.

North Korea proclaims itself to have a monolithic leadership system and does not have democracy nor any opposition to speak of that could serve as a counterweight to Kim Jong-un's actions. I am constantly worried about the fact that such a dictator places so much attention on improving the country’s nuclear and missile arsenal.

＜Related Article＞
Facebook Twitter はてブ Pocket Feedly
RECOMMENDATIONS
＜Inside N. Korea＞ Exhumation Extortion: Regime Forces Residents to Dig Up Family Remains for Costly Cremations
All over North Korea, people are busy digging up tombs and relocating ...
The Making of Rimjin-gang 〈02〉
The Making of Rimjin-gang The Making <01> <02> <03>...
＜Inside N. Korea＞ Minus 30 Degrees Celsius! Residents Live With Neighbours to Save on Heating as Coal is Rationed to Workplaces
Winters in northern North Korea are cold. Especially in the upper reac...
＜Inside N.Korea＞ Trading Firms Halt Wage Payments Due To Sanctions
2018/Feb/22 The economic sanctions on North Korea seem to be working....
＜Inside N. Korea＞ Fear and Tension among the Police: Authorities Order the Eradication of Bribery With Threats of Punishing Officers and Their Families
The North Korean authorities have decided to strengthen punishments fo...
＜Inside N.Korea＞ Tighter Control of Inter-provincial Movement: Investigating corruption in Hoeryong City’s People’s Security Station
On August 2, an ASIAPRESS reporting partner in North Hamkyung Provinc...