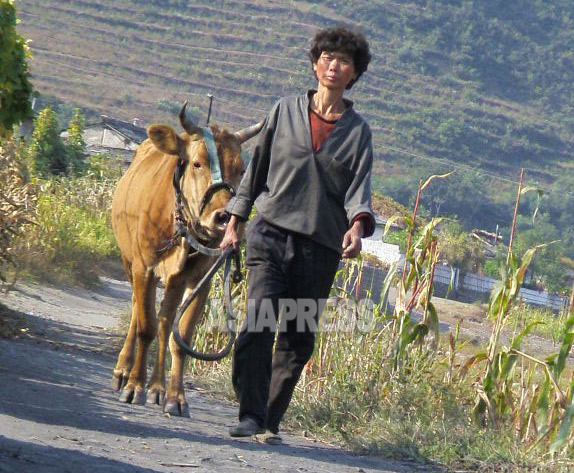 A rural woman pulling a cow. Peasants are treated poorly as they are considered the lowest class in North Korea. Taken in a rural area on the outskirts of Pyongyang in October 2008. Chang Jong-gil (ASIAPRESS)

Starting in April North Korea faces a major problem as the number of “food-insecure households,” or families that have almost run out of cash and food, has increased in various parts of the country. In urban areas, the authorities are distributing small amounts of corn to the poorest people, but in rural areas it has been found that farms are being put in charge of relief efforts, essentially meaning that there appear to be no relief efforts by the government for starving people.. (Kang Ji-won / ISHIMARU Jiro)

North Korea is currently in the midst of an annual period where food is in short supply, a time before the fall harvest called the “barley hump,” or poritgogae. This period marks the start of the "spring plight," when the harvest from the previous autumn is consumed and food reserves are all eaten up, forcing people to endure until corn and rice are again harvested from the end of August to October.

◆The urban poor are starving

In April, ASIAPRESS received heartbreaking reports from its collaborators in various regions of North Korea

At the Musan Mine in Musan County, North Hamkyung Province – the largest company in the county – there is an increasing number of households that lack the ability to eat on a daily basis.

"Workers only get 5-7 days' worth of corn a month. It is said that the mine will manage and support “food-insecure households”, but no special measures have been put in place,” a local collaborator told. He further noted that there are many workers who are hungry and cannot go to work.

ASIAPRESS received another report from a collaborator in Hyesan city, Ryanggang Province.

“Starting two years ago, the People's Committee (the local government) has occasionally provided corn only to “food-insecure households” that would starve to death if left untouched. In addition, 30 kg of corn was supplied to each inminban (people's unit) on the Day of the Sun (Kim Il-sung's birthday on April 15th) and distributed to poor households.

In the area in which I live, four households were given 7 kilograms each. However, there are complaints as to why it is only given to the “food-insecure households.” They say it's strange to give only to households that have no one to take care of, even though households such as ones with sick people or who have been scammed or thieved, are suffering as well.”

Ordinary residents and workers in urban areas are starving because of North Korea’s economic downturn. People part of the country’s disadvantaged class who have suffered reductions in their cash income can no longer buy food in local markets.

Next Page： ◆Why are farmers - the producers of the country - starving?
1 2 3
Facebook Twitter はてブ Pocket Feedly
RECOMMENDATIONS
＜Interview with Two N.Koreans＞ What do people think about the military parade, missile launches, and controls on information?
In April, North Korea continued to launch missiles as it had since th...
＜Inside N.Korea＞ Installation of Electric Fence at Border Makes Defection and Smuggling Impossible
2017/Jul/12 It is said that the electricity was supplied to the barbe...
＜Inside N.Korea＞Execution of Border Guard Officer Accused of Overlooking Defectors
On April 4, a reporting partner of ASIAPRESS, in a northern area of No...
＜Inside N. Korea＞Supply of COVID-19 Disinfectant and Protective Clothing Improves…. “If you eat garlic, you won't be infected,” ssayid rresidents.
"In our country, instead of using disinfectants, we burn mugwort plan...
＜Inside N. Korea＞ Homework and Housework: Children Forced to Do Chores and Study From Home with All Schools Closed Due to COVID-19
◆ Families become desperate as economic threat looms larger than risk ...
＜Inside N. Korea＞ Embittered Embezzlers: Demoralized and Destitute, Military Officers Turn to Crime to Survive
◆ A 40-year-old major in the military with a monthly wage of only 0.97...