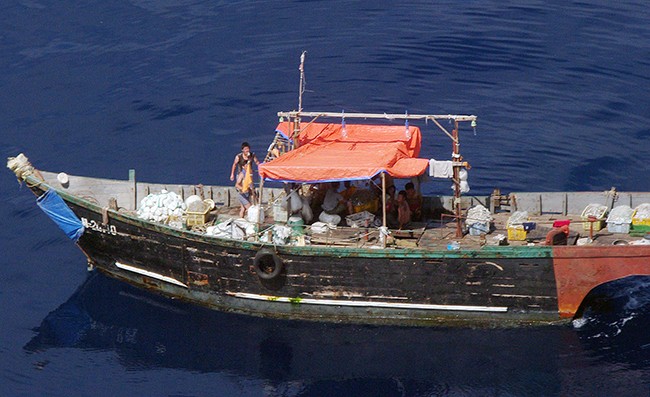 A North Korean wooden fishing boat appears in the EEZ of Japan in late July 2018. (Photo provided by the Japan Coast Guard.)

The fishing industry in North Korea is in a slump due to excessive coronavirus quarantine measures. Small-scale fishing boats are banned from leaving port, and only fisheries businesses under the control of military and party organizations are allowed to fish, but even these are said to be unable to recover their costs due to distribution controls for coronavirus prevention. Our reporting partner in North Hamgyong Province told us that small-scale fishermen are also suffering from food shortages. (Kang Ji-won).

According to an interview with a fisherman at Shinjin Port in the city of Chongjin on the east coast, for a long time small boats have been banned from leaving port due to the coronavirus blockade. Only medium and large boats belonging to the Ministry of Security, the military, the Party, and other powerful organizations are allowed to leave port, while ordinary fishermen "can't do anything but look at the sea," he said.

Coronavirus quarantine measures at beaches and ports are excessive. It is forbidden to approach the beach, or touch the garbage that drifts ashore. People cannot even pick up wakame seaweed on the beach. These measures are based on the quarantine principle that "coronavirus can come in from the sea."

In North Korea, individuals are not allowed to own fishing boats, but a large number of small vessels, generally with less than 10 crew members, have emerged over the past 20 years or so and have grown to become a core force in the fishing industry. The small squid fishing boats that drifted ashore on the Japanese coast a few years ago are a typical example.

◆ Watching out for defection by sea

Regulations for large fishing boats are also strict. In addition to strictly enforcing measures such as limiting the number of people on board, temperature screening, and disinfecting ships before leaving and returning to port, sailors are not allowed to enter the city in their work clothes.

The reason why the authorities are strongly controlling the fishing industry is to prevent people from defecting. The North Korean economy has been deteriorating due to excessive coronavirus countermeasures and authorities are wary of an increase in the number of "sea defections". These are people who leave the country from the east or west coast under the guise of fishing and head south toward South Korea.

“In order to get on a fishing boat, three guarantors are required. The guarantors would be jointly and severally liable if anyone defected. As regulations have been tightened, the amount of bribes given to policing agencies has increased,” explained our reporting partner.

◆Fishermen are becoming penniless and homeless

The situation for small-scale fishermen who are not allowed to go fishing seems to be very bad.

“The owners of small boats fishing for squid in Shinjin Port have been unable to go out to fish at all and have sold their boats to survive, while the sailors who have lost their jobs are living like 'Kochebi' (homeless children) because they have run out of cash,” said our reporting partner.

Although the fisheries businesses working under the authority have a monopoly on fishing, there are many restrictions on domestic transportation and mobility in response to coronavirus, and the inability to distribute products has made it difficult to sell fish in the market. In addition, vendors cannot even recover the cost of fuel.

As a result, the employees of these fishery businesses are suffering from a deterioration of their livelihood. At the Sunam Fisheries Office in Chongjin, the number of employees coming to work has been cut by about half. Many of them choose the "8.3" method, in which they pay a certain amount of money to the office to be treated as in attendance and work outside the office for business or profit. However, the cost of the "8.3" treatment is high, ranging from 70 to 150 Chinese yuan per month, and people need to earn more than that to make a living, which is not easy. (※ 1 Chinese yuan is about US$0.16)

There is a rumour spreading among the fishermen that “The government does not allow us to fish, but sells fishing rights to Chinese vessels to allow them to fish,” which is causing anger.

Due to the sanctions imposed by the United Nations Security Council, North Korea has been banned from all seafood exports since late 2017. The squid fishery and other fisheries on the East Coast were hit hard, losing their sales channels to China. Even so, the fishermen managed to make a living by smuggling to China and selling to the domestic market, but the COVID-19 outbreak has knocked that on the head.