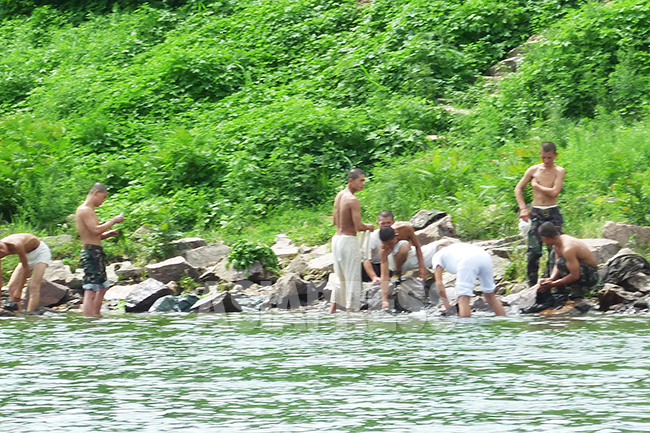 (Photo) Young soldiers bathe and wash clothes along the Yalu River. Everyone is skinny. Photographed from the Chinese side of Sakju County, North Pyongan Province in July 2017 by ISHIMARU Jiro.

◆ Soldiers discharged to serve on farms and down mines

According to research conducted by reporting partners living in the northern region of North Korea, the length of military service in the Korean People's Army has been reduced from 13 years to 8 years for men and from 8 years to 5 years for women. The decision was made after the 8th Workers’ Party Congress held in January, and is believed to be aimed at redirecting young workers to agriculture, mining, and other fields where production has been affected by labour shortages. In late March, our reporting partner confirmed this by meeting with a person in charge of the Military Mobilization Department, which handles military service affairs under the Ministry of National Defence’s Column Replacement Bureau. ASIAPRESS also interviewed several parents whose sons are going to join the military this spring. (Kang Ji-won / ISHIMARU Jiro)

A reporting partner interviewed a "Military Mobilization Department" instructor in the province who said that the decision to shorten military service was made after the 8th Workers’ Party Congress in January. The decision was due to the constant shortage of personnel in the construction of national projects and in rural areas and mines. However, an official interviewed said, "This is not an official system change, and I don’t know if it will be 8 years for men and 5 years for women next year as well.”

According to this measure, soldiers who have served for more than 8 years are to be discharged from the military. This will be mainly general troops such as infantry units, while special units and troops are to continue their service.

On February 16, South Korea's National Intelligence Service reported to the National Assembly's Intelligence Committee that North Korean authorities had reduced the period of military service for men from 9-10 years to 7-8 years and for women from 6-7 years to 5 years following the 8th Workers’ Party Congress.

There is no fixed period of military service in North Korea, as service periods vary by 1-3 years from year to year. According to research by ASIAPRESS, since the mid-2000s, the duration of military service for men had been around 10 years, but was extended to 11 years in 2014, and to 13 years since 2019.

The "Law of the Democratic People's Republic of Korea on Military Service" stipulates that young men must enlist between the ages of 17 and 25, when they graduate from the compulsory upper secondary school (equivalent to high school). For young women, it is a volunteer system, which stipulates that “they can enlist from when they turn 18”.

There is a reason why many young people have to spend most of their youth in the barracks.

In North Korea, a famine that began in the mid-1990s killed an estimated two million people. Since the mid-2000s, when the "starving generation" who were born during this period and survived the famine reached the age of enlistment, the number of new recruits has decreased dramatically, and even the formation of units has been affected. Therefore, the authorities have strongly promoted the enlistment of young women in the military and extended the length of service for young men, which used to be 8 to 10 years.

※According to the 2019 Defence White Paper, North Korea has about 1.1 million troops. This is a large military force, estimated by some to be nearly 5% of the population. 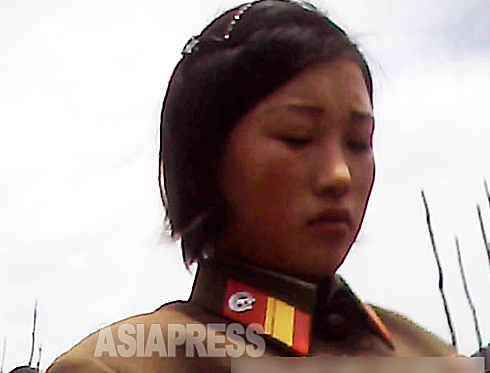 (Photo) A female soldier with a hair clip and a slightly vacant expression wandering around an alley market; her insignia indicates that she is a non-commissioned officer. Photographed in Ryanggang Province in June 2013 by Mindeulle (ASIAPRESS)

◆Why shorten the length of military service?

Even in the Kim Jong-un era, there has been no change in the policy of maintaining a large military force. One of the reasons for this is the "mobilization economy" method, in which military soldiers are treated as "free labour”.

Although the exact percentage is unknown, it is believed that a significant number of the troops are dedicated to civil engineering and construction work. There are a number of large units, such as the "Eighth General Bureau," which are engaged in construction work. In 2020, this unit was deployed in the construction of Pyongyang General Hospital, which was started at the initiative of Kim Jong-un. Although ordinary soldiers are paid according to regulations, the pay is so small that it is essentially meaningless.

Even so, the government still has to provide food for the troops but, for the past 20 years, soldiers have been suffering from malnutrition on a constant basis. In an "army that can't eat," crime and corruption are rampant, and there have been many reports of disorderly discipline.

On the other hand, in the industrial sector, there was a chronic labour shortage due to the military conscription. The most serious situation is in agriculture. A farmer in North Hamgyong Province said, "In every cooperative farm, there are not enough men to cultivate the land, and most of the workers are women.

The labour shortage was serious in coal mining too, which was an important energy industry and the backbone of foreign currency earning. Considering the weakening of the traditional military and the decrease in free labour, Kim Jong-un's regime may have decided to divert members of the overstaffed Korean People's Army to key industries that are severely understaffed. This may be an attempt to cut costs and, at the same time, increase production capacity.

Based on our field research, our next article will report on the hardships awaiting the young men and women being discharged from the military. (To be continued)

Facebook Twitter はてブ Pocket Feedly
RECOMMENDATIONS
＜Inside N.Korea＞ Trading Firms Halt Wage Payments Due To Sanctions
2018/Feb/22 The economic sanctions on North Korea seem to be working....
〈Photo Report -1〉Public Market - The Moran Market (Pyongyang)
2011/October/16 Report byGu Gwang-ho(July, 2011) I am from Pyongyang....
＜Inside N. Korea＞ Investigating the Cause of the Suspiciously Rapid Appreciation of the N. Korean Won
It was at the end of October that the abnormality was detected. The ex...
● About Our Team - ASIAPRESS and Rimjin-gang
ASIAPRESS International ASIAPRESS started in Tokyo in 1987 as an indep...
＜Inside N. Korea＞ “My parents disappeared. I’ve been abandoned”... Are Sanctions Pushing Children onto the Streets?
Homeless children, rarely seen in North Korea in recent years, have be...
Rimjin-gang - Digital Archives
Rimjin-gang offers digital archives in English. The archives typically...