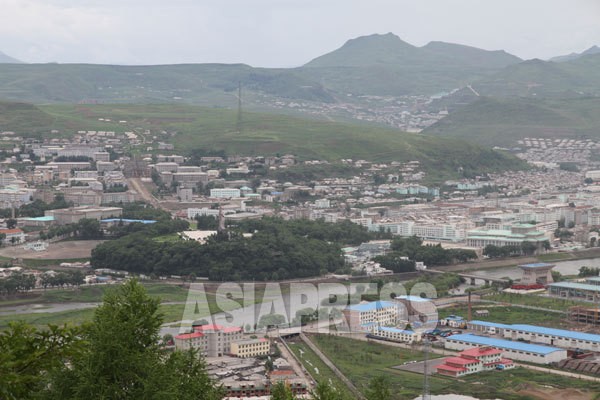 The locked down city of Hyesan. Photographed from the China side in July 2010 by ASIAPRESS.

Hyesan City in northern Ryanggang Province of about 200,000 people has been under lockdown since January 29 as a countermeasure against the coronavirus. Residents are not allowed to go outside at all. The duration of the lockdown, as notified by the authorities, is 30 days. With the market closed and no food available for purchase, residents are terrified of facing hunger. On February 5, 8 days after the lockdown, we interviewed a woman living in Hyesan City. (Kang Ji-won／ ISHIMARU Jiro)

Hyesan City is the capital of Ryanggang Province, and it is one of the trading hubs that faces China across the Yalu River. The estimated population is about 200,000. The reason why Hyesan City was on lockdown was not because of the COVID-19 outbreak. The security department (the police) has explained to the residents that it is because a smuggling case with China has been exposed.

However, their public assertion is that coronavirus has flowed into the city because smuggling with China has not been eradicated. According to a reporting partner living in Hyesan City, there have been many attempts by residents to flee to China since the beginning of January, and it is believed that this is because Kim Jong-un has criticized Hyesan City for its illegal activities and directly ordered the lockdown. Last November, Hyesan City was locked down for 20 days after a large scale of gold smuggling was exposed too.

The following is the situation under the lockdown provided by a reporting partner woman living in Hyesan City.

◆They are trying to choke people to death

This city is like a place haunted by “Kuisin.” (ghosts). There is not a single living thing, even an ant, when I look out of my apartment. It seems like all the people have died and there are only empty houses. Now I can hear the neighbour’s crying. I am terrified that if this continues, I will starve to death.

There is no food supply (during the lockdown). My aunt called me and asked, “We have nothing to eat. How are you surviving?” She was crying on the other end of the phone. I cannot bring money or rice to her. I only have kimchi and rice at my house. We used to buy them at the market every day because we can’t preserve them. What should I do?

Although the authorities are telling us to buy what we need through the resident organization, the merchants who are selling at home do not want to sell their goods anymore, and even when we contact the rice merchant who are selling rice, they told us they have no rice to sell too. I heard that the authorities is going to start a one-meal-a-day movement in our town. Will South Korea or the (international aid) organization send us rice or meat?

We have no medicine, no food, and no firewood (for heating and cooking). Even if we have money, we cannot spend it. It is almost as if the government is trying to forcibly choke the people to death. It is really bad of them to lockdown the city.

Did the people do something wrong? The resident organization is telling us to fight internally (meaning solve the problem by ourselves). The government is blocking the border. This means they want to punish us and make us all die, right? Shall we go to South Korea even if we are shot to death after the lockdown is lifted this time?

Why would anyone smuggle? It is because they cannot afford to eat, and there is no food supply, so they have no choice but to do it to survive. It is tough because of the coronavirus, but we could endure it if there was food supply. But they lockdown the city and even closed the market… I really hate Kim Jong-un.

The electricity supply is available for an average of only 1 hour a day. It is so cold that people on the same floor are avoiding the surveillance and are gathering in houses with heaters. Since this is the second time of lockdown, The "inspection team" and the resident organization leader pretend they do not notice anything, but they tell us not to leave the apartment. How can I survive if I cannot earn money by staying in my house? I really regret that I did not escape to China before the COVID-19 outbreak started.

※The "inspection team" is an organization dedicated to cracking down on social behaviour. It is formed within social organizations such as the Youth League and the Women's League, and cracks down on clothing, hairstyles, and the wearing of the Kim Il-sung badge on the streets.