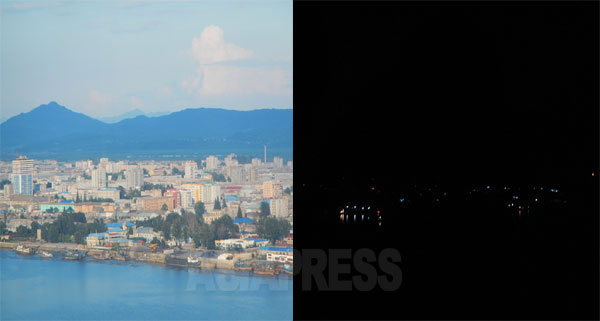 (Photo) With no running water due to power shortages, fetching water is an important part of the daily routine. A young girl lifts a carrying pole, photographed in South Hwanghae Province in October 2008 by Shim Wichon (ASIAPRESS)

In North Korea, the economic paralysis is becoming more serious due to the COVID-19 pandemic, and the electric power situation is becoming more severe as the country enters the cold season. Each year, the supply of electricity usually worsens drastically until March because hydroelectric power generation is reduced due to the freezing off rivers. In mid-January, we investigated the electricity and water supply situation in the northern region of North Korea.  (Kang Ji-won)

◆Electricity is available only for two hours a day in Hoeryong City.

Hoeryong City in North Hamgyong Province is the birthplace of Kim Jong-suk, the mother of Kim Jong-il. As a result, the area has often been favored regarding urban and infrastructure development. A local factory worker gave the following explanation:

“The electricity supply is available for an average of only 2 hours a day, sometimes 4 hours on days when the electricity supply is high. The voltage is so weak that the fuses often blow. Acts of ‘stealing’ electricity for industrial use without permission continues, so the authorities have warned that they will punish anyone, even officials, regardless of their position. Tap water is available twice a day for about 30-40 minutes, but some houses are completely unable to use it due to freezing. Many people do not have enough cash to buy firewood for heating. Since electricity is also not working, people are almost freezing to death.”

◆Musan County, home to the largest iron mine in North Korea

Musan County, which is also located in North Hamgyong Province, is the home of North Korea’s largest iron mine and has been a priority recipient for electricity. However, due to the economic sanctions imposed by the United Nations Security Council, the export of iron has been banned, and Chinese companies, which are North Korea’s joint venture partners, have withdrawn from the market and left the industry in a slump. “Last year, we only produced a little iron for the domestic market, and every day we are asked to do nothing but maintenance,” says a miner.

“The electricity supply for residents is only 2 to 3 hours a day and some days it only comes for an hour. During the ‘80 Day-Battle’ at the end of last year, the electricity supply was concentrated in the iron mines and rural areas during the threshing season, so the general public barely received any electricity. Water service is only available in the apartments up to the second floor at the moment as the water pressure is too weak to go up. It comes out for about 30 minutes to an hour in the morning and evening.”