Although it is not a recent phenomenon, the crackdown on the "Korean Wave" by the North Korean regime over the past year or so is enough to make one shudder.

Young people have been publicly denounced at criticism rallies and excluded from higher education and military enlistment simply because they were found to have sent texts in South Korean style, watched South Korean dramas in secret, or sung South Korean songs with their friends. The punishments have escalated further, and recently they have been punished with imprisonment at public trials, and even their parents have been banished from the cities too.

ASIAPRESS has obtained an internal Workers’ Party document that outlines guidelines for harsh punishment. To begin with, the title is ostentatious. The document is entitled “A Proposal for Measures and Related Proposals to Thoroughly Clean Up the Trash That Imitates and Copies the Words of the Puppets.” In other words, it is an operational plan for wiping out the "Korean Wave.”

The 5-page document was produced by the Workers’ Party Organization and Guidance Department and distributed nationwide at the end of June 2020. As stated in the subtitle, “Dear Leader Kim Jong-un’s June 19, 2020 policy”, it is an order from Kim Jong-un for anti-South Korean propaganda and ideology sessions, as well as guidelines for control and punishment. The details will be explained in this article. 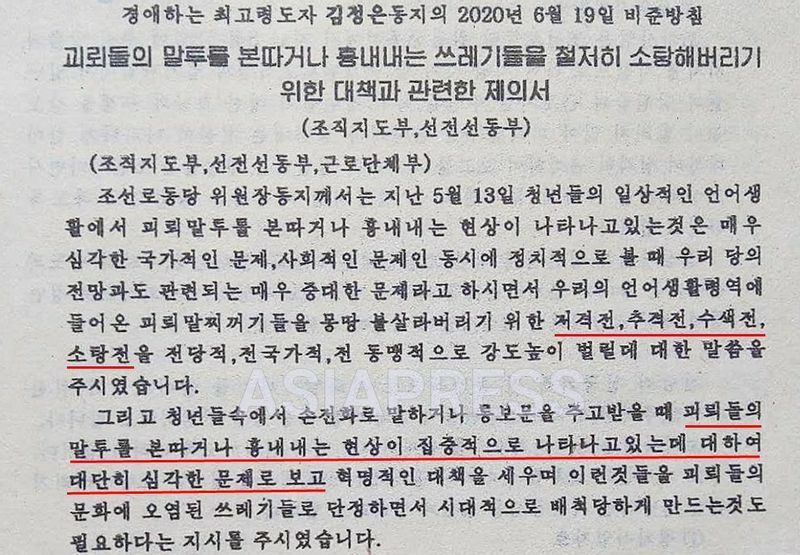 (Photo) The cover of the internal document, recently obtained by ASIAPRESS. The top underlined part refers to "sniper warfare, pursuit warfare, search warfare, and sweeping warfare," and the bottom one quotes Kim Jong-un saying, "We have to consider the phenomenon of imitating the words of the puppets to be a very serious problem.” Photographed by ASIAPRESS.

The internal document begins with Kim Jong-un's remarks on May 13.

“The phenomenon of imitating and copying the ‘puppet’s language’ in the daily vocabulary of youths is a very serious national and social problem. In addition, it is a very serious problem in relation to the prospects of our party from a political standpoint.”

The influx of Korean culture and information, or "Hallyu," has influenced the young generation to imitate the language of ‘puppets’, which is the South Korean way of speaking, indicating Kim Jong-un’s strong feeling that it is a serious problem that could upset the system.

The document continues with the introduction of Kim Jong-un's extreme rhetoric.

"To wage sniping and search and destroy warfare with high intensity on a party-wide, nation-wide, and alliance-wide basis in order to destroy every shred of the puppet language that has entered the realm of our linguistic life.”

“It is also necessary to take revolutionary measures to deal with the phenomenon of the young generation imitating and copying the language of the puppets when they talk on their phones and exchange texts and to consider it a very serious problem. It is also necessary to declare that these people are trash, contaminated by the puppet culture, so that they can be ostracized in time.”

Next Page: ◆”Hallyu" is a crime against the state...