Introduction of new bill leads to confusion
The North Korean government recently renewed the 5,000 won bill, the highest denomination in the country, with circulation beginning on August 1st. An announcement was put out for citizens to exchange their old bills, with the government giving until 2017 for people to hand in their old notes.

According to information obtained by ASIAPRESS North Korea Reporting Team, some confusion followed the issuance of the new note, our North Korean reporting partner, residing in the northern border area, telling us via phone,
" Authorities announced the renewal of the 5,000 won note and its exchange policy on 24th July. But rumors have been flying around that the old 5,000 won would be invalid immediately after the issuance of the new bill and this has thrown people into a panic."

In North Korea, a large number of people make their living through marketplace business activities. In these markets, most prefer doing business using Chinese currency (RMB) to what is considered a volatile and unstable North Korean won. Although the 5,000 won bill is the highest denomination, it is only valued at 4 RMB (around 65 US cents) at the local rate. Our reporting partner explained that after the recent currency renewal announcement, the exchange rate of 100 RMB surged from 125,000 won to 160,000 won, representing 30% inflation over a short period. 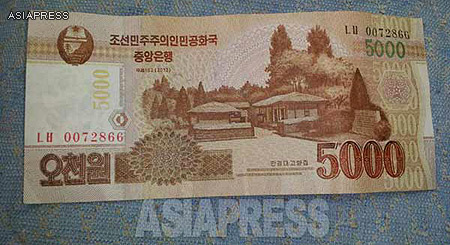 One side of the new 5,000 won bill. Kim Il-sung's image is nowhere to be seen.  ASIAPRESS

2009 Flashbacks lead to panic
The sudden rush on Chinese currency, following the issuance announcement, has brought back memories of the botched 2009 currency revaluation that led to many North Koreans losing their savings and the subsequent execution of Pak Nam-gi, director of the Planning and Finance Department of North Korea's ruling Workers' Party, in 2010.

During the 2009 revaluation, the government devalued the North Korean currency at a rate of 100 to 1. Each family was initially limited to exchanging a maximum of 100,000 old North Korean won for a maximum of 1,000 new won. The only exception was made for those who were holding more than 100,000 won in bank deposits, in this case it was possible to exchange a maximum of 500,000 won into the new currency.

As a result of what is understood to have been an effort by the government to rein in local black market money traders widely considered to have been growing in influence beyond the reach of the state, individuals with more than 100,000 won saw their fortunes evaporate overnight.

Having experienced the trauma of the 2009 currency revaluation debacle, people assumed that a similar clampdown was in preparation and rushed to exchange their unwanted DPRK won into RMB. Reacting to this, state authorities have taken immediate actions to tackle the panic. 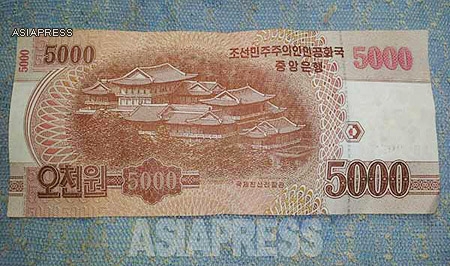 A flipside of the new bill, adorned with a picture of the International Friendship Exhibition. The year of issue is printed as 2013. Photo taken August 2014 in North Korea. ASIAPRESS

Saving Face? Where did Kim Il-sung go?
What are the North Korean state's intentions in issuing the new bill? According to a photo that our reporting team obtained from inside North Korea, immediately noticeable about that new bill is that the picture of Kim Il-sung has gone, replaced by an etching of the Supremem Leader's. On the other side of the bill is a representation of the International Friendship Exhibition, the large museum located in Myonhyangsan, North Pyongan Province, famous as the repository of gifts sent to the Great Leader from various state dignitaries.

Our reporting partner clarifies,
"There are several voices regarding what's going on with the new design. Even the 5,000won bill, the highest denomination in the country, has no real monetary value. So people treat it very roughly sometimes. Although, officially, people are supposed to avoid crumpling the picture of Kim Il-sung, this is rarely the case and it's feared that this represents a loss of respect for the Great Leader. As such, his picture is nowhere to be seen on the new bill. Others are saying that as the value of the North Korean won has continued to fall, the state has expressed concerns that the dignity of Kim Il-sung is also effected, tied to the falling currency." 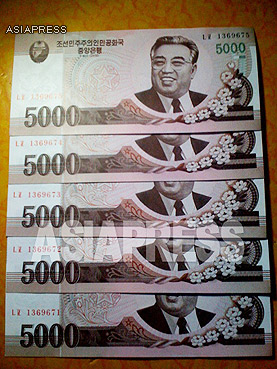 The 5,000 won note prior to the currency exchange. Clearly visible is the image of Kim Il-sung. (Photo taken inside North Korea. ASIAPRESS

Another reporting partner, also from the northern region of the country, who currently works as a public servant, explained that a high ranking official had suggested the government would soon issue a 10,000won bill. For the new bill it is assumed that the pictures of Kim Il-sung and Kim Jong-il will be presented next to each other.

Since the death of Kim Jong-il at the end of 2011, official documents, including the membership card of the Korean Workers' Party and pictures in public places, represent both Kim Il-sung and Kim Jong-il in the same space. This can be understood as evidence pointing to the elevation of the late Kim Jong-il to the position of a deity, alongside his father, Kim Il-sung.

The North Korean economy continues to struggle, with memories of the 2009 currency reform crisis still fresh in the minds of citizens throughout the country. Given this, it is hardly surprising that recent moves by the government to issue a new 5,000 won note has met with skepticism in the best cases and panic in the worst. What remains absolutely clear is that the North Korean people continue to harbor strong feelings of distrust to the government.
*** Rimjin-gang