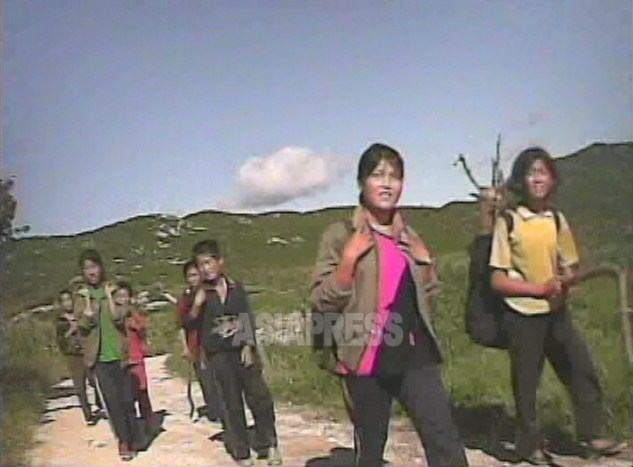 Female junior high school students coming back from a mountain after picking up acorns. “I need to gather 18 kg of these during the summer holiday”. There is firewood in their knapsacks. August 2008, in a suburb of Haeju City, South Hwanghae Province. Taken by Shim Ui-cheon (ASIAPRESS)

Recently the number of student absenteeism has grown in local cities due to excessive requisition from school.  A reporting partner in Hoeryong, North Hamkyung Province, reported on 29th of November that, “In many schools in local cities, a third of the students don’t go to school”. (Kang Ji-won)

Giving up on studying to farm and find medicinal plants, half of the students are absent in some schools.

Our reporting partner who conducted the research on schools in Hoeryong City reported that, “Currently in Hoeryong, the number of student absenteeism has been increasing, and a third of students are absent in most of the schools.  In one junior high school, some classes lack even half of the students.  Since their families are in extreme poverty and because of excessive requisition they can not keep up with their “assignments” that the schools ask of students.  Those who cannot go to school help their parents farm or go to a mountain to pick medicinal plants to sell.”

Aside from submitting scraps of iron and rabbit hair for “national security”, students in North Korea have to hand over alcohol, acorns for making miso, grasshoppers for fertilizer, and firewood to heat schools.  North Korean parents who are suffering from the requisition have ironically called it “taxation”–in North Korea there supposedly is no taxation.  Those who are not able to submit materials need to pay cash as a penalty.

Our reporter explained that the because of the requirement to turn over materials, “a student has to offer around 30 to 50 Chinese RMB on average every month.  Moreover, a primary student is required to submit 3 kg of scrap iron and a junior high school student needs to turn in 5 kg.  Apparently it will be used for restoration work within flood-affected areas from earlier this year. However, it was difficult to find scrap iron since within North Korea it is almost on existent.  If a student cannot offer scrap iron their school decides how much he/she must pay based on the market price”.   (1 Chinese RMB is equal to 0.14 USD as of December 2016.) 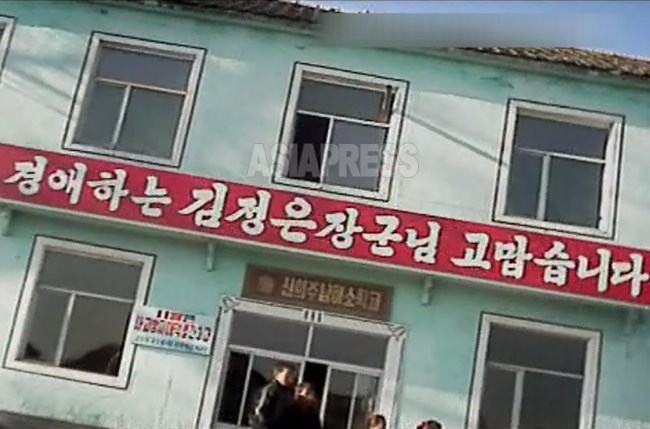 Students being bullied and left out at school

If one student cannot offer the requisites to their school, every student in his/her class becomes responsible and the whole class gets punished.  It is such a serious issue that those who are not able to turn in the materials are bullied by the students who have.

Our reporting partner added that, “students from affluent families can quickly present the materials of this “taxation”, but they also need to pick up scrap iron after school because of the other students who failed to submit.  That’s how the unfortunate students get bullied and ostracized.  This leads these students to stop attending school”.

This “taxation” is just another form of exploitation.  Due to the harsh economic burden and the unbearable difficulty of finding these materials, some parents end up complaining to an upper-level organization.

“Parents may directly appeal to an upper-level organization to tell the reality of their plight.  Later on the Provisional People’s Committee for North Korea or the Youth League may send personnel for further research.  However, they don’t take the issue seriously since high-ranking officials themselves have ordered the ‘taxation’ within the schools” the reporter concluded.