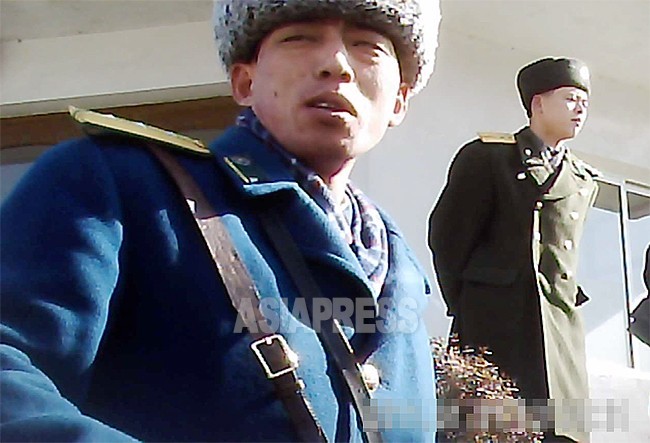 (Photo) A traffic stop officer in a blue uniform stands at a checkpoint. Photograph taken in South Pyongan Province in January 2011 by Kim Dong-cheol (ASIAPRESS)

The North Korean government is mired in a severe shortage of foreign currency due to UN security council sanctions. On top of this, the police force is also suffering from financial difficulties. To maintain operation of the organization, police officers are currently being given quotas for receiving bribes. In addition, it is reported that there is a power struggle being waged by top officials over use of the collected bribes. From September to October, multiple reporting partners in North Korea reported on these developments. (Kang Ji-won/ISHIMARU Jiro)

The Kim Jong-un regime is once again calling for “self-reliance” as a rallying cry for overcoming economic difficulties. The regime is asking for factories, businesses, and citizens to find solutions to their problems through their own efforts. In other words, the regime has no capacity and, therefore, is ordering people to find ways to survive on their own.

A reporting partner from North Hamkyung Province, speaking on the topic of ‘self-reliance’, said, “Most of the factories have stopped. Even the raw materials imported from China are insufficient. The government is calling for ‘self-reliance’ but even primary school students know that it’s not possible. The markets are depressed and nothing is being sold. There are kotjebi (homeless children) in every market.”

◆ Collecting bribes to pay for gasoline and new computers

Government organizations are facing significant challenges too. Even the police, charged with maintaining order and controlling the people, are at the point of financial desperation that they now demand bribes blatantly and systematically.

In October, a reporting partner from Ryanggang Province said, “The police are suffering from financial difficulties and are expanding the scope of their crackdown. The police have had no choice but to ask police officers to collect bribes and extort citizens in order to raise the money needed to maintain the organization.”

At the center of this crackdown are the inspection and traffic divisions. The inspection division is charged with cracking down on corruption within institutions and businesses but, lately, has been openly condemning targets and demanding money.

According to a reporting partner in Ryanggang Province, “After the paper factory in downtown Hyesan ran out of operating funds, the inspection division found that the factory had been selling wood and other raw materials to individuals. The inspections division demanded 100 kilograms of fuel from the factory for the police office. I have heard that they demanded money from other businesses to replace the computers for resident registration.”
Next page : Motorbike licenses sold for 50 times the regular, stipulated price...

Next Page： ◆ Motorbike licenses sold for 50 times the regular, stipulated price
1 2
Facebook Twitter はてブ Pocket Feedly
RECOMMENDATIONS
The Changing Face of the Tuman-gang (Tumen River) - PART 2
Sino-North Korean border report: - Transportation of Iron Ore from Nor...
＜Inside N. Korea＞ Killer Counterfeit: Regime Orders Urgent Recall of Dangerous Fake Alcohol
◆"Round up the fake soju!" A number of North Koreans have been sent to...
Living in Pyongyang - The Real Story (3) Pyongyang City Shrinking
2013/August/11 Speaker： GU Gwang-ho,Rimjin-gang reporter Editors：ISHIM...
Was the Incineration of a Shot S. Korean Official in Accordance with Kim Jong-un’s Instructions?
The shocking incident took place on September 22nd. A civil servant i...
＜N. Korea Interview＞ "So the sanctions will continue?" North Koreans Face Disappointment as US Summit Breaks Down
◆“But we had been expecting the sanctions to be lifted…” On February 2...
＜Inside N. Korea＞ No ‘special rations’ provided for Party Foundation Day
◆ The truth behind the 'gift from the Great Leader to the people' Octo...