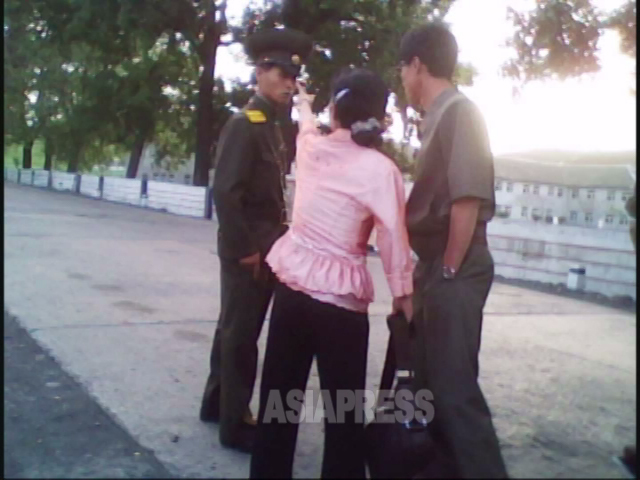 A woman points confronts a police officer demanding bribes, cursing at him, “Who do you think you are?” Photograph taken in South Pyongan Province in June 2010 by Kim Dong-cheol (ASIAPRESS)

The other key to making money is through the traffic division. Besides receiving bribes through individual traffic citations, the division openly demands money for issuing licenses for buses, trucks, and motorcycles.

According to the reporting partner, “The traffic division of Hyesan City is creating a ‘crackdown target list’ of individuals and companies that have vehicles privately registered. An acquaintance of mine registered a 10-ton truck under an architectural design company for moving cargo 6 times a month between Hyesan and Hamheung. He is being fleeced by the transportation division for 1,000 Chinese yuan (about 165,000 South Korean won) per month.”

Motorcycle licenses, which are treated as private possessions, are also a source of money. Licenses are supposed to be sold for about 100,000 North Korean won (about 13,000 South Korean won) but the transportation division is reportedly selling the licenses for 4,000 Chinese yuan (about 660,000 South Korean won). This is 50 times the stipulated, regular price.

Bribery demands and extortion by the police, secret police, and other such security organizations were common occurrences in the past, leading to many complaints from citizens and internal issues for the authorities to deal with. As financial difficulties have worsened in recent years, bribery and extortion have become all the more blatant. In response, the reporting partner says, “opposition from residents is strong”.

Conflict is also arising within security agencies due to disputes over bribery interests. According to a report in late September from a reporting partner in Musan County, North Hamkyung Province, all police posted at transport division traffic stops were replaced by Musan County’s Police Chief.

Traffic stops, where police take bribes directly from passers-by, are the most lucrative posts for police officers. Ostensibly, the reason for the complete replacement of traffic stop officers was their corruption and negligence during crackdowns. As the reporting partner explained, however, the real cause was the power struggle between top security officials vying for access to the bribe money.

The traffic stop officers were all replaced on September 9- the holiday marking the Party’s Foundation Day. Musan County’s Police Chief had ordered for bribes from the traffic stops to be used to fund the special rations to be given to citizens to mark the national holiday. The police officers posted at the traffic stops violated the order, however, saying they could not raise the funds because they were already tasked with providing the money to other organizations such as the Workers’ Party and inminban (local neighborhood political units).

Angered by this, the Police Chief ordered for the police officers at traffic stops to be completely replaced, citing their poor work ethic and corruption. Though the true intention behind the replacement, of course, is to ensure that money from the bribes is not leaked to officials of other agencies.

The reporting partner explained, “At the direction of the Country’s Police Chief, the traffic stop officers were to all be replaced, including those who previously served as officers in the military and those who had just entered the police force. He appointed only police officers who would pass on the bribe money as they are supposed to. He has also started to approach senior officials from other agencies to serve as his eyes and ears. The wife of an ordinary police officer complained, ‘The Police Chief is doing ridiculous things to enrich himself.’”

1 2
Facebook Twitter はてブ Pocket Feedly
RECOMMENDATIONS
“Secondary school textbooks issued under the Kim Jong-un regime” The list of textbooks and details.
※ The material is in Korean and Japanese only. There is no English ver...
Kim Yo-jung: Devoted Sister or Ambitious Second-in-Command? The Key to Kim Jong-un’s Crisis Strategy for Maintaining Family Rule
Rumors of Kim Jong-un’s critical health condition, which spread around...
＜Photo Report＞ People are exploited in mobilized labor (2) Recorded women’s complaining voices; “This is all free labor,” “Everything is taken by the high ranks”
The mobilized labor is performed by the unit of work place and school....
Stimulant Drugs Take Root in the Daily Lives of the N.Korean People (PART2)
2013/October/07 Written by LEE Jin-su<< PREVIOUS (PART 1) Drugs ...
N.Korea IT Report - PART1: Kids Master Emoticons and Movies with Mobile phones
2015/July/19 Written by LEE Jin-su, Editor; Rimjin-gangThe number of m...
＜Inside N. Korea＞ Kotchebi, the Homeless, Under the Kim Jong-un Regime
2016/Dec/2 “Kotchebi” is a North Korean word only. It is not in the K...
aboutus
ASIA PRESS INTERNATIONAL (API)Asia Press International (API) was esta...
＜Inside N. Korea＞ Collateral Damage: Border Blockade Designed to Counter Coronavirus Leads to Deadly Drug Shortage
◆ Signs of humanitarian crisis With trade at the border suspended in o...
＜Inside N. Korea＞ ‘Made in Kaesong’ is North Korea’s hottest brand ... unauthorized operations continue at the Kaesong Industrial Complex
In February 2016, it was revealed that factories within the Kaesong In...
[Video Report] North Koreans Forced To Provide Labor
Citizen mobilization in North Korea doesn’t only mean mobilization in ...