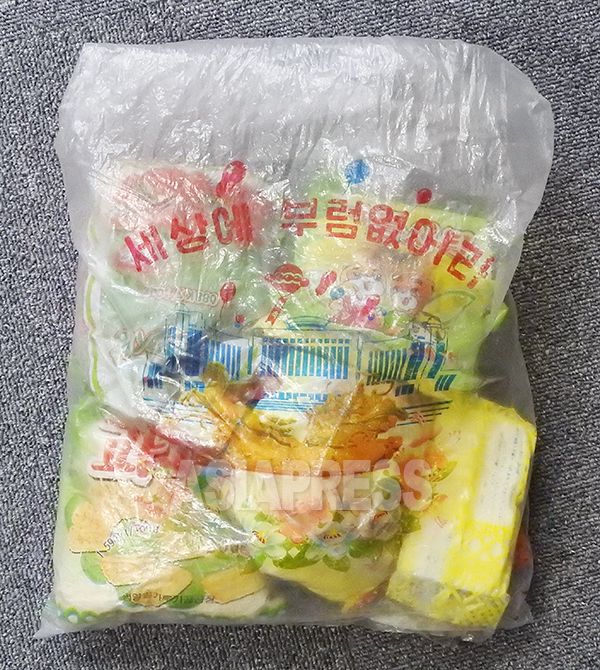 A pack of domestically produced snacks handed out to children in 2012 to mark Kim Jong-Il’s birthday. On the pack is written, “We have nothing to envy”. However, the snacks were said to be rather tasteless and many tried to instead sell the snacks at the market. (ASIAPRESS)

Traditionally, citizens would receive ‘special holiday distributions’ to mark the birthdays of the nation’s leaders or on other such holidays. Up until the early 90’s, citizens would receive alcohol, cooking oil, and meat, with students receiving sweets, school uniforms, and classroom supplies. In the 2000’s, however, following the period of famine known as the “Arduous March”, these special holiday rations became poorer in quantity and quality. With the state struggling financially, all that the citizens could hope to receive in their distributions were a few snacks, a bottle of cooking oil, or a set of toothpaste.
Next page :What about the holidays in September and October this year?

Next Page
1 2
Facebook Twitter はてブ Pocket Feedly
RECOMMENDATIONS
＜Inside N. Korea＞ Hyesan Heist: Police Search for Stolen Military Data, Suspect Inside Job
In late May, police in Hyesan City, Ryanggang Province, began a massiv...
[Video Report] Tighter Sino-North Korean Border Control During Last 20 Years
The border between China and North Korea has been tightened during the...
＜Inside N.Korea＞ Period of Vigilance for Worker`s Party Congress Suddenly Extended
On the afternoon of May 9, an ASIAPRESS reporting partner in northern ...
＜Inside N. Korea＞ Government sets nighttime curfew at 6 PM..."Police arrest anyone who leaves their homes..." Why now?
Starting in November, the Kim Jong-un regime shifted the nighttime cur...
Fishy Business: Will Resumed Smuggling at the Chinese Border see a Return of the North Korean ‘Ghost Ships’?
◆ Illegal fishing in Russian waters draws gunfire On October 7, a Nort...
＜Inside N. Korea＞ “My parents disappeared. I’ve been abandoned”... Are Sanctions Pushing Children onto the Streets?
Homeless children, rarely seen in North Korea in recent years, have be...