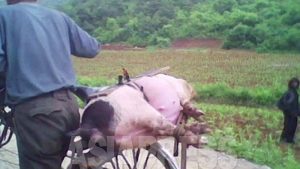 A resident carrying a pig on the back of their bicycle. Photographed in June 2010 in South Pyongan Province by Kim Dong-cheol (ASIAPRESS)

In South Korea, multiple cases of African swine fever (ASF) have been confirmed since late September, with authorities declaring a state of emergency. As many cases have been discovered in South Korea’s northwest Gyeonggi Province, in places such as Paju, it is almost certain that the virus came from across the North Korean border. As such, the South Korean military gave orders, on October 4, for soldiers stationed at the DMZ to kill boars on sight. (ISHIMARU Jiro)

So, what measures are being taken on the other side of the border to combat ASF? An investigation into the matter reveals a very poor state of affairs.

Cases of ASF were confirmed in North Korea in mid-May and reported to relevant U.N. agencies. Subsequently, North Korean authorities issued a notice prohibiting the sale and consumption of pork. Meanwhile, quarantine officers and police cracked down on pork sales at markets.

To avoid huge financial losses from having their stocks confiscated, however, pig farmers and butchers began secretly selling pork from their homes. At this time, the price of pork fell from 15 Chinese RMB per kilogram to 12 RMB per kilogram. (※1RMB=0.14USD)
Next page :Sudden spike in number of pigs dying from virus...