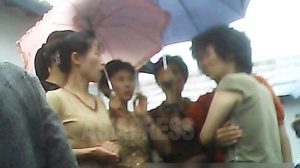 A number of reporting partners in North Korea reported in late April that police are investigating into rumors that suggest ‘regime change’, with word spreading across the country that “There will be war with the United States” and that “China has begun preparations for the collapse of the country”. (Kang Ji-won)

A reporting partner, living in the northern region of the country said, “Recently, there has been a widespread rumor that the Chinese People’s Liberation Army has been building up its forces along the border. The reason, they say, is because North Korea and the U.S. are preparing for war. Either that, or because they want to prevent the regime from collapsing in order to stop people from crossing into China en masse. These rumors have spread so much that the authorities are now looking to control them.”

The rumors that are said to be spreading in the country, all seem to suggest the collapse of the regime.

Another reporting partner, living along the border with China along the Yalu River in Hyesan, Ryanggang Province, said, “It is likely because the economy is getting worse day by day. People at the markets are complaining openly about the system, saying things like, ‘It would be nice to be handed over to China, even if it was just Hyesan City,’ and ‘If it works, then perhaps better to side with the U.S. rather than with China. If so, we can become capitalist’.”
Next page : Police investigate false rumors...