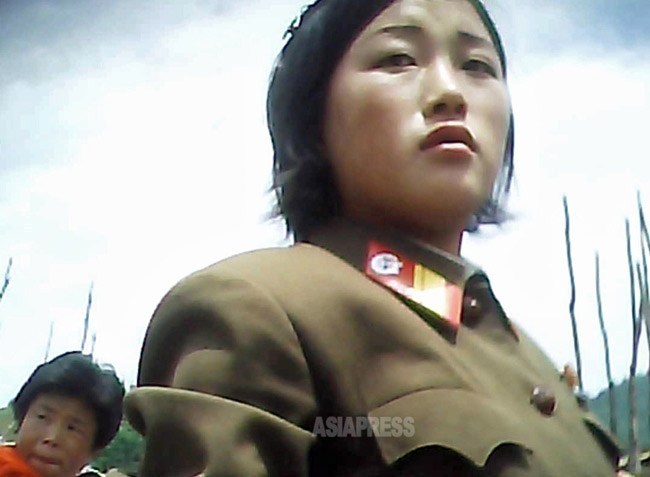 (Photo) A female soldier who came to the market in the alley to buy groceries. Currently, there are no military soldiers in the market at all. Photograph taken in Ryanggang Province in June 2013. “mindeulle” (ASIAPRESS)

The North Korean authorities have implemented strict restrictions on military officers in response to coronavirus. Soldiers are not only forbidden to leave their units but also to have contact with the public. Parents are no longer able to visit or bring food to their children, and some soldiers are thus becoming malnourished as they are unable to supplement their poor diet. Our reporting partner, who lives in Musan County, North Hamgyong Province, contacted military officials and provided us with a recent update on March 10. (Kang Ji-won)

Related Articlefa-arrow-circle-right Lockdown Death Toll Climbs in Hyesan: “We are Dying Due to Lack of Medicine and Food”

North Hamgyong Province shares a border with China for about 500 km, and a large contingent of border guards is stationed there in addition to general military units.

The border guards used to be a "lucrative department" as they could receive bribes for aiding or ignoring smuggling and border crossings with China. Officers would eat in a dining hall and junior soldiers were able to enjoy the extra income.

However, since the Kim Jong-un regime tightened restrictions on the Chinese border to prevent the influx of coronavirus, smuggling has been almost eliminated and it has also become difficult to cross the border into China. Surveillance among troops is also strict. “We can’t smuggle anything, and all of us, from officers to junior soldiers are suffering from hunger, because we can’t have any contact with local people,” said a reporting partner.

◆Only side dishes are salted radish and Chinese cabbage

So, what do the soldiers eat? Our reporting partner interviewed a military supply official, who told us the following:

“The only side dishes are salted radish and Chinese cabbage. For the main meal, we cook and serve corn flour. Although the country supplies a mixture of white rice, the quantity is completely insufficient, so the troops sell the rice and buy cheap corn. However, many soldiers have become malnourished.”

As the quality of the food has deteriorated in this way, incidents of border guards shooting and eating “stray livestock” have frequently occurred, leading to growing dissatisfaction among local residents. Last August, the Ministry of Social Security (police) issued a declaration to prevent coronavirus stating that “a 1-2 kilometer buffer zone will be set up along the border and persons or livestock entering the buffer zone will be shot on sight.”

“In Musan County, which is on the border with China, there have been many incidents of soldiers shooting at dogs, goats and other livestock that have entered the buffer zone. Additionally, at the end of February, soldiers shot and killed a free-rage goat that was approaching the buffer zone in Chi-chori, Musan County, and ate it themselves. Since contact between the public and soldiers is forbidden as a coronavirus countermeasure, they don’t even try to return the killed livestock to their owners.”

Reporting partners say that there are also reports of some soldiers deserting because they cannot stand the terrible meals. Currently, in the border areas with China, travel to other cities and counties is prohibited in order to prevent the spread of coronavirus. Officers tasked with bringing back deserters are also unable to travel, and more and more soldiers are deserting in the hope that they will not be chased.

A reporting partner said that a military official he knows told him “the troops in Musan County have been unable to track deserters since last November.”