As control over North Korean people has gotten tougher this year, the number of detainees in “labor training camps" (rodong danryeondae) has drastically increased in northern part of North Korea.  A former inmate, recently released from the camp said in an interview conducted by our reporting partner in September that “horrendous conditions has been causing a number of inmates malnourished and dead.” (Kang Ji-won/Paek Chang-ryong) 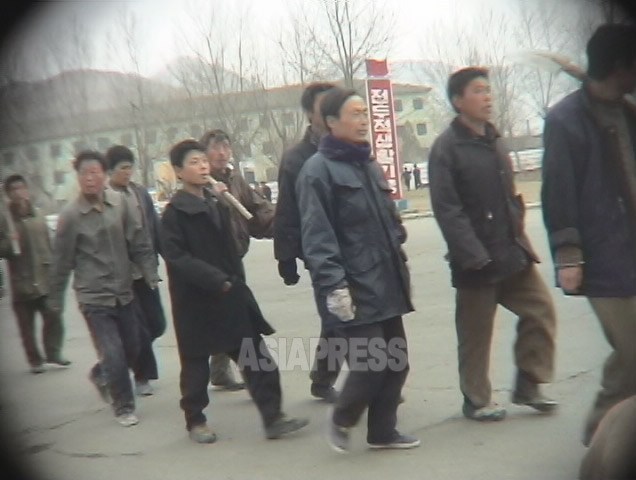 Inmates in a labor training camp getting in line and heading to a workplace. June 2005 in Chongjin City, North Hamkyung Province. Taken by Lee Joon(ASIAPRESS)

Those who committed minor crimes and disrupted the social order are detained and sentenced to forced labor up to a year without a trial.  The labor training camps, located in cities and counties across the nation, are managed by the police.

Following is an interview with a resident in a northern part of North Korea.  She was arrested and sent to a labor training camp earlier this year for a minor violation of the social order.

Reporter: Has the number of inmates in the labor training camp been increasing?
Woman: Yes.  There is even no space to sit down.

Reporter: Why is this happening?
Woman: Strict social order stifles people when they have hard time to make their living.  Everyone needs to earn money by doing illegal businesses since factories and companies have been dysfunctional. However, the tighter regulation has been imposed [by the state authority].
Related article: [Video Report] A rare glimpse of ‘No. 10 Checkpoints’ set up by the State Security Department

Reporter: What kinds of people were detained?
Woman: Those who smuggled [in and out of China], defected to China, attempted to flee into South Korea, skipped work, committed theft, and all other kinds of crimes.

Reporter: How was the life inside the camp?
Woman:  A huge number of inmates were about to die due to malnutrition.  All I could eat were salt and corn with green vegetable.  People like me, imprisoned near his/her own house, could get a small amount of food from family.  However, those who are from other areas, especially young people and women suffered from severe malnutrition.  In the camp, many inmates from remote areas die. 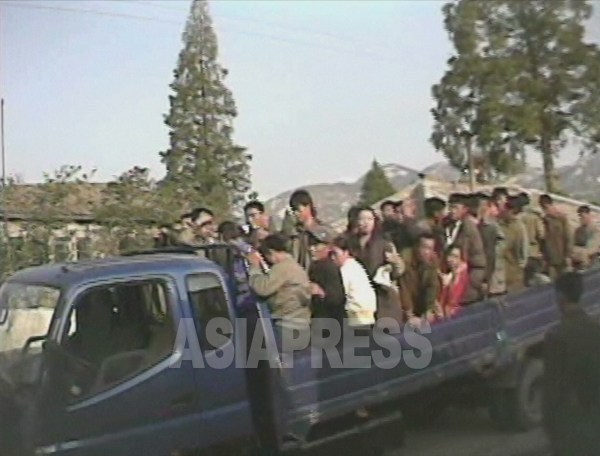 Inmates taken to a workplace in the early morning. October 2008 in Haeju, South Hwanghae Province. Taken by Shim Ui-cheon(ASIAPRESS)

Reporter: What kind of work did you do?
Woman: In my case, my family could bribe [a government officer], so I was only assigned a relatively easy labor.  Nevertheless, now my face is completely black like “kotchebi”, homeless people, since I was forced to farm. I needed to spend lots of money [for bribery and other purposes] after taken into the camp.

Reporter: Do inmates get beaten up?
Woman: Yes.  Since inmates were not considered as human beings, they were beaten up like a dog.  Women had to endure only for the first few days while men suffered for the whole period in the camp.  Being in a more miserable state than women, some men had their legs broken, ended up having a physical disability.
Related article: ＜Inside N.Korea＞ Hunt for defectors resumed

The North Korean authority has frequently mobilized citizens for various kinds of volunteering works, political indoctrinations, and events.  For example, the “70 days speed battle” attempted to increase productivity in the short term in the run up to the congress of the ruling Workers’ Party in May, the first congress in 36 years.  North Korea also carried out a nuclear test early in this year.  It has been widely reported that the state authority harshly cracked down on those who did not follow the mobilization order, skipped work, and violated the dress code by wearing a capitalistic cloth.  The number of inmates in labor training camps has drastically increased because the Kim Jong-un regime has tightened control over its people. 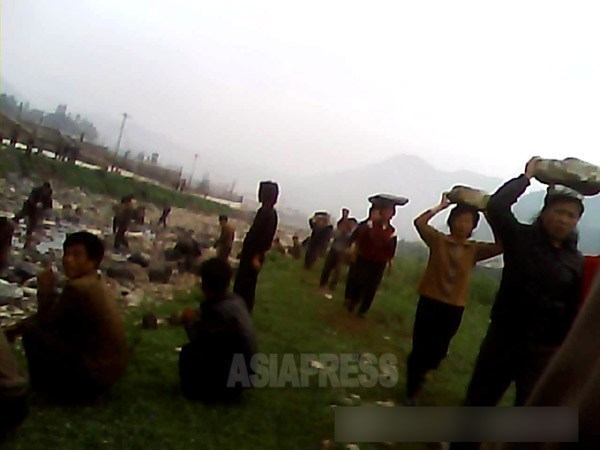 Women at a labor training camp big stones on their heads for a river bank construction. June 2013 in a Northern local city. Taken by ASIAPRESS>