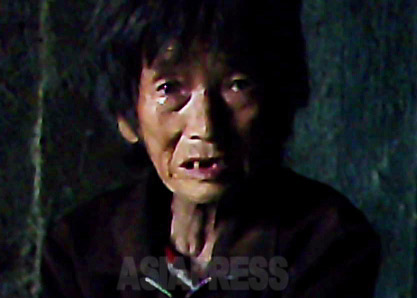 A grandmother and her grandson, after being kicked out by her son-in-law because he couldn’t afford to feed them anymore, lived in an old air raid shelter in a suburb of Pyongyang. She told an ASIAPRESS reporting partner in North Korea, “The authority would have me detained if I get caught in a city.” June 2011, in a suburb of Pyongyang. Taken by Koo Gwang-ho (ASIAPRESS)

Koreans respect the elderly, and North Koreans were not an exception.  However, during the social chaos in the late 1990s, even a number of young people died of starvation in North Korea: nowadays, the spirit of respect toward the elderly has collapsed.

“Young people regularly call me, ‘Hey old bastard, bitch, old fart’ and so on.  It’s the end of the world.  The spirit of this nation has been destroyed, and the moral sense has faded away,” said a number of old North Koreans who crossed the border into China.

Generally speaking, ethics and morality deteriorate at the country where an alarming level of poverty exists.  However, even after the severe famine ended, the “respect towards old people” has not been revived.
Related article: Abandoned Elderly (PART4) Collapsed Social Welfare System Has Left the Elderly on the Streets.

Although the famine ended, it is inevitable for people to earn money in order to feed themselves–since the food rationing and the social welfare system have been obsolete.  Seemingly, the whole society has recognized the elderly as useless. (ISHIMARU Jiro) 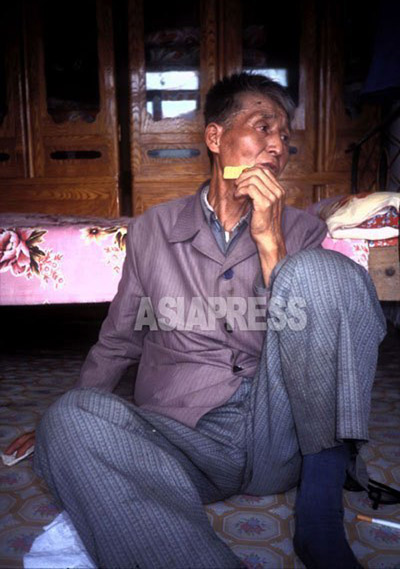 An old man defected from North Korea just eight hours ago due to famine. He said, “We were better off under the Japanese occupation. (Currently,) The elderly die first in North Korea.” He kept eating food during the interview. July 1997, Jilin Province, China. Taken by ISHIMARU Jiro (ASIAPRESS) 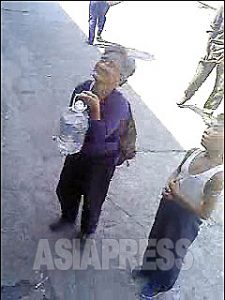 An old woman is asking passengers to buy water at a train station. A boy is competing with her to sell his water to them. September 2013, South Hamkyung Province. Taken by ASIAPRESS. 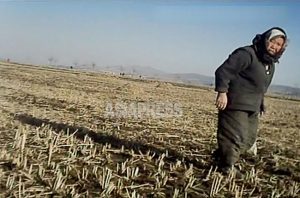 An old woman is gleaning a post-harvest rice field for left over kernels. November 2012, a farm in Sinuiju, South Pyongan Province. Taken by ASIAPRESS.

Facebook Twitter はてブ Pocket Feedly
RECOMMENDATIONS
“We Don’t Want to Meet”: Fearing Coronavirus Infection, China Rebuffs N. Korean Advances at the Border and Delays Resumption of Trade to Late-May
◆ No fertilizers imported for the farming season The China-North Korea...
＜Latest Photo Report＞ A Trip to the North Korea-China (Part 2: No More North Korean Refugees at the Tight Tumen River Border)
The Tumen River marks the border between North Korea and China’s easte...
"Punishment by Law, or Eliminated by Commandment": Two Types of Political Prisoner in N.Korea
2014/June/01 Written by ISHIMARU Jiro, Editor in Chief, Rimjin-gangPub...
＜Inside N. Korea＞ Truck falls into reservoir due to heavy snow, leaving 19 dead in the northern part of Ryanggang Province (a photo and a map)
2016/Nov/28 On November 18, an ASIAPRESS reporting partner in the nort...
＜Inside N. Korea＞ Quarantine Collapse: Residents Rediscover Taste for Cut-Price Pork as Black Markets Boom
While South Korea and China ready themselves against the possibility o...
ASIAPRESS ARCHIVE SERVICE-Conditions of Use
ASIAPRESS IMAGE(video-footage/photo) LICENSING Download the applicatio...