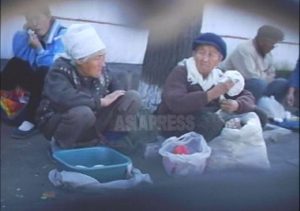 Elderly people are selling bread and rice cakes on the street in Pyongyang. They earn cash from doing this kind of business. October 2007, in Rangrang District, Pyongyang. Taken by Lee Joon (ASIAPRESS)

Children and the elderly are the biggest victims of the chronic economic difficulty in North Korea, which has stifled the entire population.  In particular, I witnessed a number of elderly people starving to death during the massive famine in the 1990s.  After the food rationing system had collapsed some elderly people started to work in manual labor jobs and some joined in on small businesses, if they did not they would become like many others, waiting for death.  The Kim Jong-un regime hosted a self-congratulatory event for the “International Day of Older Persons” in an effort to show off the “well-developed social welfare system for old people.”  Despite the fact that the elderly who live in poverty have significantly suffered from terrible living condition.  This photo report is an introduction to the unfortunate reality of their lives. (Paek Chang-ryong)
Related article: ＜Photo Report＞ Kotchebi, the Homeless, Under the Kim Jong-un Regime (PART1) A girl and a boy–probably siblings–sleeping on a street 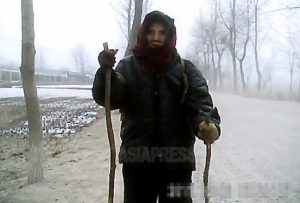 An 80 year old woman slowly and aimlessly walking on the street. She uses a tree brunch as a walking stick. February 2011, in a suburb of Pyongyang. Taken by Kim Dong-cheol (ASIAPRESS)

◆An old woman is roaming around after being kicked out of her house.

January 2011, an old woman–wearing a thick jacket–walking on the street with a walking stick in a suburb of Pyongyang.  She told an ASIAPRESS reporting partner that her son kicked her out of the house.

Reporter: Don’t you have children?
Woman:  I started to live with my son three years ago because I had 700 kilograms of corn.  (Now that we had eaten up all the corn) He kicked me out.

Reporter: Did your son kick you out?
Woman: He said, “Get out of here.” I cannot walk (due to leg pain).  I didn’t think things like this could happen.
Related article: [Video Report] The hidden homeless of Pyongyang

In North Korea, article 72 of the Socialist Labor Law guarantees to provide elderlies with free medical services and sufficient access to social welfare systems based on a social insurance.  However, this appears to just be a formality.  There is no care facilities anywhere in local cities.
Next page: An elderly person, aged over 80, said “I have to work like cattle, painfully engaging in farming.”