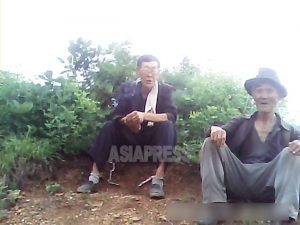 An elderly person (on the right), aged over 80, “I have to work like cattle, painfully engaging in farming.” June 2013, on a mountain in a rural area. Taken by our Team ‘Mindeulle’ (ASIAPRESS)

According to the “Socialist Labor Law” in North Korea, men aged over 60 and woman aged over 55, who had worked over a certain period of time, are entitled to pensions. The amount of their pensions are supposed to be 60 to 70% of their monthly salary.  However, after the food rationing system (distributing food at the state-fixed price) collapsed, the pension system also broke down.

The law mandates that 500 Won to 1500 Won would be granted to the elderly for their pension payout.  However, as of October 2016, the price of  one kilogram of rice is around 4500 Won.  A monthly pension is equal to only 100 to 300 grams of rice, not nearly enough to survive on.
Related article: ＜Inside N. Korea＞ Kotchebi, the Homeless, Under the Kim Jong-un Regime

Children are unable to take care of elderly parents due to extreme poverty themselves, while the government irresponsibly ignores their plights.  This has caused healthy, able bodied, elderly people to take on businesses within the jamadang markets or as street hawkers as well as manual labor jobs just to afford food, or worse, to not turn into “kotchebi,” the homeless, like the lady in the photo below. 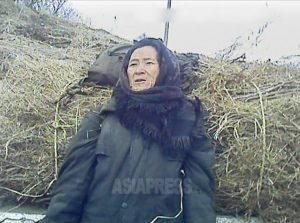 An old woman is selling grass and tree brunches that she collected on a mountain. They are used as fuel for fire. March 2013, in Pyongsong City, South Pyongan ProvinceTaken by our Team ‘Mindeulle’ (ASIAPRESS)

The picture above was taken in Pyongsong City, South Pyongan Province in March 2013.   An old woman carrying tree branches and grass on her back.  She carries twice or three times the amount of her own body.  According to an ASIAPRESS reporting partner, she earns money by collecting firewood on a mountain.

These photos clearly show a nonexistent social welfare system for the elderly, contrary to what the government-made propaganda states.

The state has been incapable of providing old people with their basic needs, even their own children will give up on them due to the extreme food shortages in the country.

[Note: The Socialist Labor Law states that the government must take care of its elderly and disabled peoples–who have no income and no caretakers–at care facilities around the country for free.]