At a garment factory in Saebyol-County, North Hamkyung Province in the northern part of North Korea, there has been an incident where female workers refused to come to work en masse. Sources say the workers were protesting because the authorities failed to live up to their commitments to make payments in kind. Such reports of walkouts en masse from the workplace are extremely rare in North Korea. 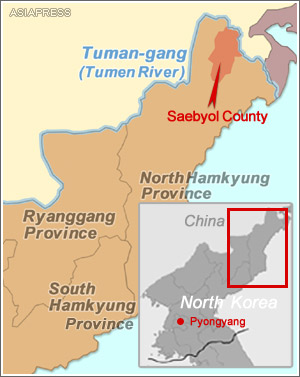 The walkout occurred in October 2013. One of our reporters inside North Korea investigated on site and gave us the report. (* The delay in disclosing this incident which occurred back in 2013 is due to considerations to ensure the safety of the reporter.)

This garment factory was no longer in operation due to the collapse of the economy in the 1990's. In 2012, officials of Saebyol-County made plans to use investments from China to start operations again. Saebyol-County is in an excellent location, just across the Tuman River from China.

Mr P, our investigator on site, says the initial working conditions were as follows. Mr P obtained this information because a relative was working at this factory at one time. "It was a twelve-hour workday, with three meals of corn noodles provided. The pay was 30 kilogrammes of white rice per month, with no cash payments. Many local women jumped at these conditions, and bribes were even paid to win jobs at the factory. My relative was very happy to have found a slot there."

Why were so many people so keen to apply when there were no cash payments to be made? At that time, the market price for white rice was approximately 5000 won per kilogramme. In other words, the job was actually worth 150,000 won. 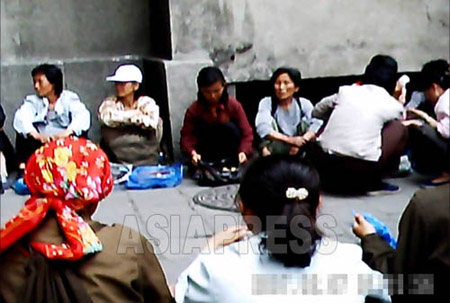 Women street vendors sitting in a line, selling goods in the area between apartment buildings. It is illegal to do this and the local authorities often made crackdowns and forcibly confiscated all goods and charged fines. (Moranbong District, Pyongyang. June, 2011. Taken by Gu Gwang-ho) ASIAPRESS

The monthly wage of a general worker at a state-owned factory has been set at around 2,000 won by the state. So 30 kilogrammes of white rice comes to about 75 times the average wage. For your reference, the rate of real exchange at the time was around 9,000 won to the U.S. dollar, so 30 kilogrammes of white rice would be the equivalent of around 16.7 U.S. dollars. So the rice would be sold to gain cash income.

The factory began production in September 2013. Mr P's investigations revealed that 135 workers were initially hired. About ten of them were male. However, just one month after start of operations a major problem arose. The payment of white rice was not made as promised. Most of the angry female workers refused to come to work.

The white rice for the "monthly wage payments" was to be brought in by the Chinese company, then handed over to the workers via the county officials. That was the agreement. However, the officials first withheld about half of the rice as "army rice" before paying the workers. That's what made the workers so angry.

The officers, in a panic, visited the homes of the workers to encourage them to come to work.
"The female workers sent the officers packing, saying, 'How can you expect us to come to work when you will not pay us properly? We will starve!' In North Korea today, if promises are not kept, any one will leave the workplace at the factory in the same way" says Mr P.

Traditionally, in North Korea, people have not had the freedom to choose their occupation. If workers did not have connections or money, they had to follow orders from the authorities and go and work where they had been assigned. But in the case of this garment factory, based on the working conditions shown, people applied of their own free will, then quit of their own free will. In other words, these women had understood their going to work at the factory to be a labour contract.

ISHIMARU Jiro has been reporting on North Korea for more than 20 years, but this is the first time he has ever heard of something like this that might be called a group labour dispute. This is not a normal case, the investments from the Chinese company making it unusual. But it does tell us that in North Korea, there are now some workplaces where the government or Korean Workers' Party are having problems controlling them.
We have also heard that since then, the Chinese investors have given up on this factory, and it is no longer in operation.

Facebook Twitter はてブ Pocket Feedly
RECOMMENDATIONS
Growing Illegal Housing Market in N.Korea
Report by PARK Chan-u, PAEK Chang-ryong; Edit by LEE Chaek  2014/July/...
＜Inside N. Korea＞ Worsened power supply paralyzed the train system, reportedly causing deaths in a stopped train
2016/Nov/18 According to ASIAPRESS partners in North Korea, the power...
＜Inside N. Korea＞ Expansion of the market economy as the driving force behind social transformation--based on sources from inside N.Korea. (PART3) State-owned transportation is in a miserable state. by ISHIMARU Jiro
2016/Dec/21 ◆ Transportation and traffic have greatly increased and d...
＜Inside N. Korea＞Trade with China Set to Resume in March with Fertilizer Imports as Top Priority
North Korea has begun to work toward the resumption of trade with Chin...
＜Inside N. Korea＞ Bribery Bust-Up: Police Chief Replaces All Traffic Cops to Ensure Monopoly Over Bribe Money
The North Korean government is mired in a severe shortage of foreign c...
Fishy Business: Will Resumed Smuggling at the Chinese Border see a Return of the North Korean ‘Ghost Ships’?
◆ Illegal fishing in Russian waters draws gunfire On October 7, a Nort...
＜Inside N. Korea＞ Arson Suspected After Fire Breaks Out the Day Before Regime’s Rubber Stamp Election
◆Fire breaks out amid tight security ahead of Supreme People’s Assembl...
＜Photo Report＞ Kotchebi, the Homeless, Under the Kim Jong-un Regime (PART2) Toddler worn out on a street while regime shows off luxury orphanages
2016/Oct/27 The North Korean state media has often announced that Kim...
＜Inside N. Korea＞ Running out of Juice: Regional Cities Receiving Just 2 Hours of Tap Water and Electricity per Day
In North Korea, the economic paralysis is becoming more serious due to...
＜Inside N. Korea＞ Nationwide Warning Issued After Electric Bike Battery Explodes, Killing Family of 3 in Pyongyang
An electric bicycle battery exploded while being charged in a Pyongyan...