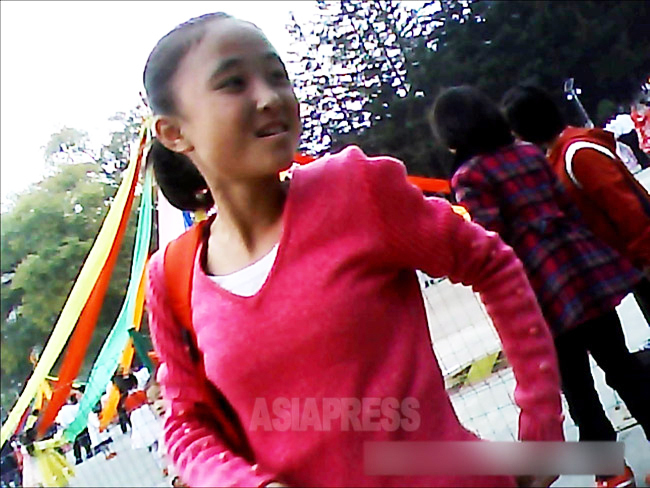 A junior high school girl dressed up. The influence of foreign trends is obvious. Photographed in Hyesan City by ASIAPRESS.

Related Articlefa-arrow-circle-right＜Interview with a North Korean Woman(1)＞ Why the COVID Situation is Causing a Surge in “Black-Market Abortions”
A whirlwind of massive ideological and cultural crackdowns targeting young people is sweeping through North Korea after Kim Jong-un sent a letter to a youth organization at the end of April. The following passage was included in the letter.

“We must make the youth clearly aware of the evils and ill effects of reactionary ideological culture, which is like a malignant tumour…and we must never ignore even the slightest element that promotes anti-socialist and non-socialist behaviour or undermines the sound mind of the youth.”

What is "reactionary ideological culture like a malignant tumour"? The tumour that is being referred to is foreign culture, including South Korean dramas, movies, and music. In order to "exterminate" this, the North Korean authorities have enacted the "Law on the Elimination of Reactionary Thought Culture" in December 2020.

The summary is: "Those who directly watch or possess South Korean movies, videos, books, songs, pictures, or photos will be imprisoned for between 5 and 15 years, while those who cause the influx or dissemination of such materials will be sentenced to life imprisonment or death." The government is trying hard to keep young people from being exposed to Korean culture, even threatening them with the death penalty.

So, what are the attitudes of young people? In early May, We interviewed Ms. P., who lives in the northwest of North Korea. She has a daughter who attends a high-level middle school (equivalent to high school), and is well aware of the attitudes and behaviour of "today's youth." She also keeps a close eye on the authorities' crackdown on young people, and is constantly gathering information from the police and other officials. We used a Chinese cell phone that smuggled in North Korea to communicate with her.

――I heard that the crackdown on North Korean dramas and music is very strict.

P: A lot of people have been caught since the new law was implemented. In April, three students from my nearby junior high school were caught. They may be sent to a training school for juveniles.

――Could it be that young people are avoiding South Korean culture out of fear?

P: Even so, I don't think young people will stop watching. They are at an inquisitive age, and when they are told not to watch, they seem to want to watch more. They complain to each other, "Why aren't we allowed to watch this?" and spread the banned videos by sharing them.

Young people try to make money to pay for South Korean videos- even if it means they can only eat Kali rice (a mixture of potato starch and corn flour, and a synonym for lousy food).

――Is the crackdown ineffective?

Yet, there are fewer and fewer videos of the outside world available. Maybe that's why it's so popular these days for young people to pass around sex videos they've taken with their cell phones! They take the pictures with their faces hidden, so even if the video is discovered, they can say that they found the picture on the street or that they did not click on the photo sent to them. So, these days, (officials) warn that even if you haven't seen the videos, you will be punished just for having them.

――It seems that many young people are attracted to South Korean culture.

P: Young people are very interested in clothes and hairstyles, and they try to imitate South Korean culture and language. They also try to use South Korean language. It is said that, among 14 to 17 year olds, if you have never seen a South Korean drama or speak not with South Korean style, you will be ridiculed. They don't speak that way in public because of the crackdown, but when they get together with other young people, they proudly talk in the South Korean style.

As I was on my way to the market the other day, three students were talking and walking in front of me. As I listened, I noticed that they were speaking in a South Korean style. I think today's young people speak the S. Korean dialect better than South Koreans.

◆Do you believe in the future of socialism?

――Kim Jong-un's regime emphasizes the strengthening of socialism. But do the younger generation believe in the future of socialism?

P: Since people cannot get ahead if they are not members of the Labour Party, the idea of joining the Party is still strong. Nevertheless, as the party says, there is no young person anywhere who thinks that socialism will make the country richer. What is important is not socialism but life.

For young people, the control has become even worse. In school, students often have to compete in a question-and-answer format on revolutionary history. Even if you get good grades in math and English in the university entrance exam, if your score in revolutionary history is low, you will get bad grades.

――What is the public's perception of Kim Jong-un?

P: In the first place, there is no one who asks, "Do you think Kim Jong-un is good?” The more people who understand how the world works, the less interested they are. From my point of view, Kim Il-sung's era was good, Kim Jong-il's era ruined the economy, and Kim Jong-un has lost everyone's interest. I think that is the perception of most of the people.

――Ten whole years have passed since the Kim Jong-un era began. In the end, the country has not moved toward reform and opening up.

P: Recently, control over the economic activities of the people has become very strong. What the government is doing now is not trying to let the people live a rich life, but to make them eat what the state gives them and do their work.

People's perception of Kim Jong-un has changed. When the summit was held with the United States, China, and South Korea, we had hoped that maybe the North Korea would change, that maybe it would become a prosperous place to live. Those hopes have completely disappeared. In a word, there is nothing to believe in in today's world. (End)   (ISHIMARU Jiro)