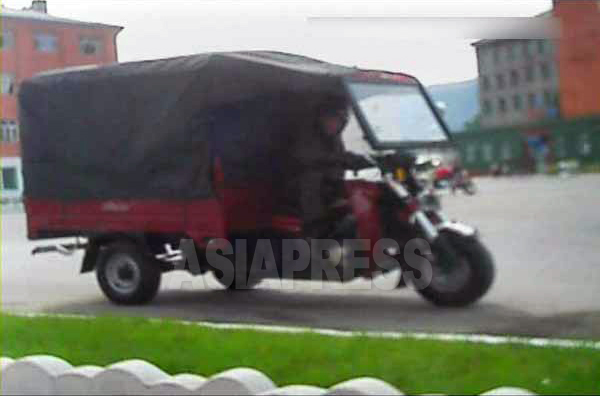 People with money use a tricycle taxi. But fares in North Korea are on the rise. Taken by Rhee Hoon in Hyesan City, October 2013. (ASIAPRESS)

The United Nations has imposed a full range of economic sanctions North Korea, in response to the country’s missiles launches and nuclear tests. Under the tough international sanctions, the North Korean economy is struggling. ASIAPRESS has been researching consumer price changes inside the DPRK. Some reporting partners reported that the price of staple foods, like corn, remain unchanged. The price oil is on the rise, however. Especially in Yanggang Province in northern North Korea.

The following is a list of consumer prices from the markets in northern Yanggang Province, from the end of September to October 6.

The prices of oil and diesel dropped and the price of staple foods is unchanged, compared to those of September.

As the fuel price rises, the operation of tricycle taxies, much favored by residents as a mode of short range transportation, decreased as fares have risen.

A reporting partner who carried out the survey said, “there are less tricycle taxes because of the higher fuel costs. Taxis aren’t even accepting 150 Chinese Yuan for travelling 100km. It used to be 70 Yuan, before.”

Meanwhile, there is a rumor doing the rounds in the northern provinces that Chinese goods will soon not be available from merchants operating close to the Sino-North Korean border. This is said to be because China has joined the UN economic sanctions. But DPRK authorities claim that this rumor is groundless. ASIAPRESS reporting partners unanimously agree that there is no change in North Korean market operation and consumer prices.

Facebook Twitter はてブ Pocket Feedly
RECOMMENDATIONS
Kim Jong-un Regime Fears Digital Resistance: less than 0.1% of N. Koreans Can Access the Internet (ISHIMARU Jiro)
Kicking down and shooting civilians- Myanmar's security forces have sh...
＜Inside N. Korea＞ Power supply to northern regions cut off due to Samjiyeon construction project
Since late October, the power supply to residents in the northern regi...
Discontent Over Special Rations and Criticism Towards Wasted Expenditures on the Launch
2012/May/04 Written by ISHIMARU Jiro, Editor in Chief, Rimjin-gangDesp...
＜Inside N. Korea＞Supply of COVID-19 Disinfectant and Protective Clothing Improves…. “If you eat garlic, you won't be infected,” ssayid rresidents.
"In our country, instead of using disinfectants, we burn mugwort plan...
＜Inside N. Korea＞ North Korea's border with China is under martial law
Nighttime curfews and road closures continue at 6 a.m. People complai...
＜Inside N. Korea＞ Connection of Trains Enables Sightseeing to the South
◆Economy does not improve- despite talks A South Korean delegation ent...