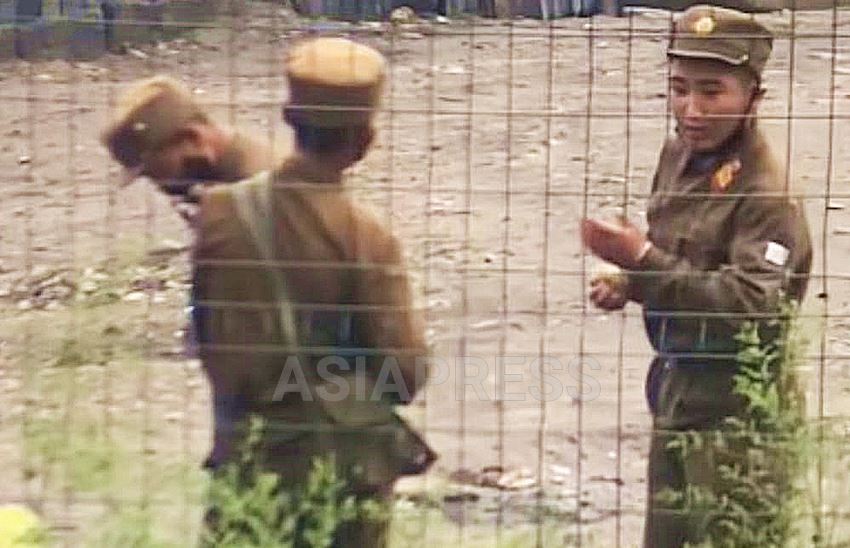 A young North Korean soldier guarding the border with his mask down to his chin. Taken by ASIAPRESS from the Chinese side of the border in October 2020.

The Kim Jong-un regime declared the end to the COVID-19 pandemic and victory over the coronavirus. Following the declaration, the government has not been publicly announcing figures related to deaths due to COVID-19 or even the number of fever patients. What’s the real situation on the ground? This article, the second in a two-part series, is based on a report from an ASIAPRESS reporting partner living in a city in North Hamgyung Province. (KANG Ji-won / ISHIMARU Jiro)

“C,” a laborer and party member who gave ASIAPRESS a report on the situation in North Korea in late August, lives in a city in North Hamgyung Province. After the government acknowledged a COVID-19 outbreak in May, fever patients in the city skyrocketed, leading to a city-wide lockdown and movement bans that lasted a long period of time. “C” said that he also contracted COVID-19.

Based on surveys conducted by ASIAPRESS up until this point, officials in many provincial cities are not conducting COVID-19 tests; instead, they are simply judging whether someone has contracted the virus by whether they have a fever and other symptoms such as coughing. The judgement “C” received regarding his contraction of the virus was conducted in the same way.

◆ From forced isolation to self-isolation

“I think everyone in the city has contracted the virus. I did, and I don’t think that anyone around me avoided getting it. Cadres, however, are getting the virus now, I hear. There’s few cases where people have serious side effects from the virus. That’s why most people just think that COVID-19 is just a mere cold.”

―― Are people being isolated?

“Early on (after the outbreak of COVID-19) the city was put under total lockdown. After that, local lockdowns of districts and apartments were put into place, and after the recent announcement (of victory over COVID-19), people began being isolated in their own homes. People report to the authorities if they have cold symptoms such as coughing, and are voluntarily going into self-isolation to prevent the spread to others.”

People in self-isolation are given 2-4 kilograms of corn. Among those facing economic difficulties, there are even those who try to get the corn by faking illnesses.”

―― Disease controls have not been relaxed in the China-North Korea border region.

“There are still people contracting the virus, but there are so many people that have recovered from their infections that people don’t care that much anymore (about disease control efforts). While the disease control system has loosened somewhat, the neighborhood watch units hold meetings telling us that, “You will receive criminal punishments for breaking quarantine rules. Don’t be complacent.” The authorities are just telling people to wear masks, that’s it.” 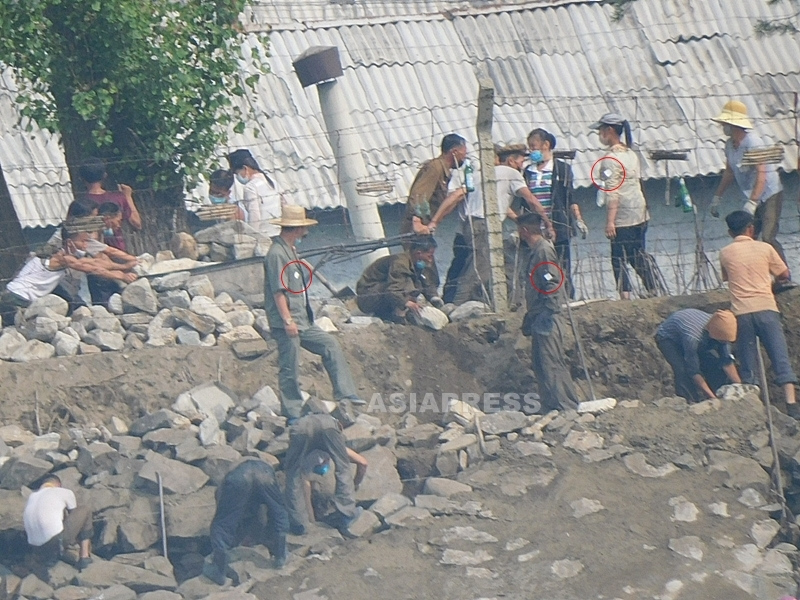 People mobilized for a levy repair project in North Pyongan Province. They are masks even though they are working outside. Taken by ASIAPRESS from the Chinese side of the border in mid-July 2021.

◆ Personal travel to other regions is still prohibited

―― Can people travel to other areas?

Ordinary people are not allowed to travel to other areas for personal reasons. The authorities don’t allow them to visit other areas to visit relatives, get medical treatment, or attend funerals. People traveling for work can move around, such as those working for trading companies. People travelling in cars must wear masks, and the authorities issue quarantine permission certificates that show the destination and the name of the person being visited at the destination. The certificates must also state whether the person has contracted COVID-19 or not. That being said, the authorities continue to track where people on business trips go and who they meet.”

――Do North Koreans believes that they’ve achieved herd immunity?
“The authorities aren’t talking about it, but many people believe that they have immunity and say that those who got COVID-19 won’t get it again. However, the disease control authorities are telling people to report any new symptoms unseen before because there’s still new variants emerging.”

―― Are there plans for people to be vaccinated?
“I’ve not heard anything about vaccines starting. There’s rumors that they’ve been imported from China, but there’s nothing being done in that regard. Pyongyang cadres, I’ve heard, have all received vaccines, though I don’t know if that’s accurate.”

◆ ASIAPRESS reporting partners ask about how the situation is abroad

ASIAPRESS reporting partners have asked a lot of questions about the COVID-19 situation abroad and how other countries are dealing with the virus. They have wondered whether trade has continued under the pandemic and whether other countries have closed down their borders and allow their citizens to leave. These questions reflect their hopes for the restart of trade with China.

There was also a great deal of interest shown toward vaccines. They asked whether vaccines prevent future infections and the cost of injections. When ASIAPRESS explained that Japanese and South Koreans have gotten three rounds of vaccines for free, they were all very surprised to hear that. They also expressed envy at the governments’ provision of aid to people suffering economic difficulties. (To be continued in the next installment)