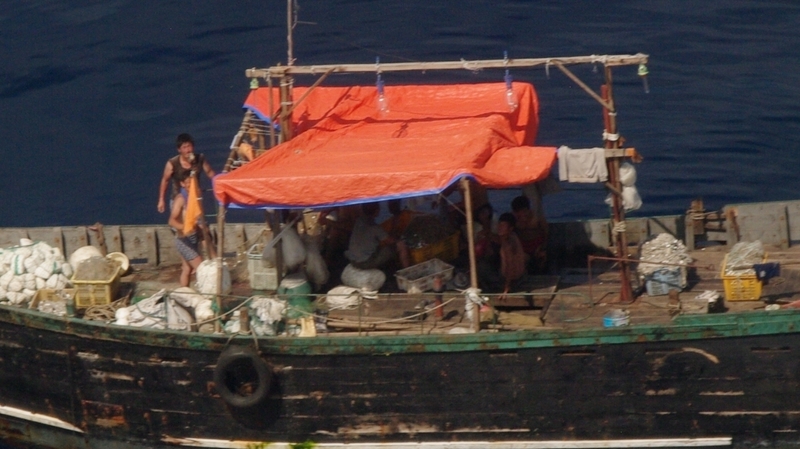 A wooden North Korean ship in the waters of Japan's EEZ. Taken in mid-August 2018 by the Japanese Maritime Safety Agency.

Wooden fishing boats, which appear to of North Korean origin, are drifting along and washing up on the Japanese coast. As of November 21, more than 100 such ships have been recovered this year. Last year, more than 100 drifting and washed-up ships and 35 corpses were found. The figures as of this autumn are on pace to exceed last year's totals. Judging by the shape of the wooden ships, they are undoubtedly used by North Koreans to fish for squid (Some are spreading absurd rumors that they are North Korean spy ships).

Squid fishing season in North Korea lasts from June to November each year — the same as Japan. The squid are either dried or frozen, and they are mainly exported to China. Seafood exports represented the third largest source of revenue for North Korea in 2016, amounting to around 200 billion won (27 million USD). Squid was the main product. However, seafood exports were completely banned last year after the U.N. Security Council passed a resolution on economic sanctions.

Without a market to sell the squid, I expected there to be fewer ships going out to sea and washing ashore. In late May, however, North Korean ships were spotted fishing in the vicinity of Japan’s Exclusive Economic Zone (EEZ). According to the Japanese Fisheries Agency, the number of North Korean fishing boats operating illegally in the EEZ had surged to 5,000 by October. It was almost a full-fledged invasion. But what was responsible for this sudden influx?

The attached graphic, released by the Japanese Fisheries Agency, shows the extent of North Korean fishing operations near the EEZ.

An ASIAPRESS reporting partner travelled to the fishing centers of Cheongjin and Nasun upon request to investigate further.

The partner reported that the market price of dried squid had plummeted in 2018. This was due to the ban on exports as a result of the sanctions. However, since Kim Jong-un’s second visit to China in early May, top-grade dried squid prices bounced back to 8,000 won per kilogram. Expecting sanctions to be lifted, Chinese traders had started to buy the squid again.

Our reporting partner said, “Chinese traders are storing their purchases in North Korean depots until they can be exported. In addition, large quantities of dried squid are being smuggled to China along the upper stretches of the Yalu River”.

Next page: The type of fishing conducted in North Korea has changed...

1 2
Facebook Twitter はてブ Pocket Feedly
RECOMMENDATIONS
＜Inside N. Korea＞ Birthday Ban: Why N. Koreans were forbidden from raising a glass to Kim Jong-un
2019/Jan/10 ◆ Is Kim Jong-un portraying himself as a ‘humble’ leader?...
The Power Supply Deteriorating In N.Korea - Prioritized Coal Export Possibly Decreased The Power Station Operating Rate
2015/November/11 Report by PAEK Chang-ryong, defector reporter, Rimjin...
“Oppa” is Outlawed: Top-Secret Documents Detail Kim Jong-un’s Direct Orders to Eliminate S. Korean Cultural Influence
Kim Jong-un is fomenting hatred of South Korea within the country, ord...
● Media Reviews
2014/Nov(UK) The Rory Peck Awards The Finalist Feature Winner 2014 201...
Gas Prices in North Korea 1.6 Times Higher Compared to Beginning of the Year…Situation in Ukraine Expected to Exacerbate Economic Difficulties
Market prices for gasoline and diesel oil have skyrocketed in North Ko...
● The Making of Rimjin-gang
The Making of Rimjin-gang <01> The Making of Rimjin-gang The Ma...
＜Inside N. Korea＞ Kitchen Nightmare: Cash-Strapped Regime Competes Against Citizens in the Restaurant Business
◆Kim Jong-un’s funds take a hard hit Who are the most powerful people ...
[Video Report] The hidden homeless of Pyongyang
Pyongyang is a ‘staged city’, where outsiders are not privy to glimpse...
＜N.Korea Crisis＞ Why is there a Food Shortage Crisis in the Breadbasket Region of Hwanghae? (PART2)
2012/May/10 Written by LEE Jin-suFarming Villages' Crops Taken by the ...
Attempted Bombing of Kim Jong-suk Statue in Hoeryong
2014/May/16 Written by PAEK Chang-ryong, a defector reporterCity on hi...