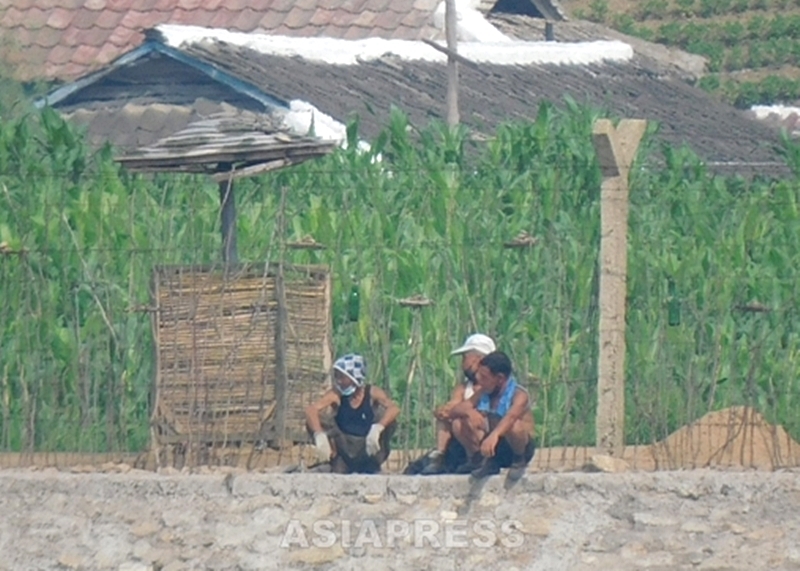 A North Korean standing besides a barbed-wire fence built on the border with China to prevent the spread of COVID-19 into the country. Taken by ASIAPRESS in July 2021.

Kim Jong-un declared on August 10 that the country had achieved victory of the COVID-19 pandemic. The country has not released data on deaths due to the virus since. What, however, are the realities in the country? In the third installment of this series, ASIAPRESS spoke to a reporting partner, “E,” who lives in a city close to the Chinese border. “E” is a laborer who conducts military-related work. (KANG Ji-won / ISHIMARU Jiro)

“They’ve relaxed quite a bit. First of all, there’s no more daily temperature checks conducted by neighborhood watch units, and people voluntarily report their fevers to the authorities. Usually, people go into self-isolation for around four days and can leave once their fevers go down. Disinfections and lockdowns are limited to just houses where they’re have been fever patients. There’s been no lockdowns of entire areas.”

“There’s still fever patients emerging, but people don’t care anymore. I got the virus, and so did all those around me. It’s hard to find anyone who hasn’t contracted it. When talking to disease control officials, they say that there’s not much of a spread of the virus anymore. They say that the leadership has been told that people who’ve recovered from the virus no longer contract it even if they come into contract with someone who has been infected.”

―― What about restrictions on movement?

“People aren’t allowed to leave the city, nor are they allowed to come here. That’s particular the case in the (China-North Korea) border region. The authorities are telling people to be careful because there is still the chance that the virus could enter from China. The strict ban on approaching the Tumen River is still being enforced.”

―― So, people must be much more relaxed now?

“It seems like the COVID-19 situation will be ok for the time being, but the problem is people’s livelihoods. Nothing is operating as it should, and people no longer have incomes from the local markets. People are hoping that factory production will restart so that products can be exported to China and food can be imported into the country, but the Chinese don’t seem interested in permitting this because of the COVID-19 situation in our borders.” 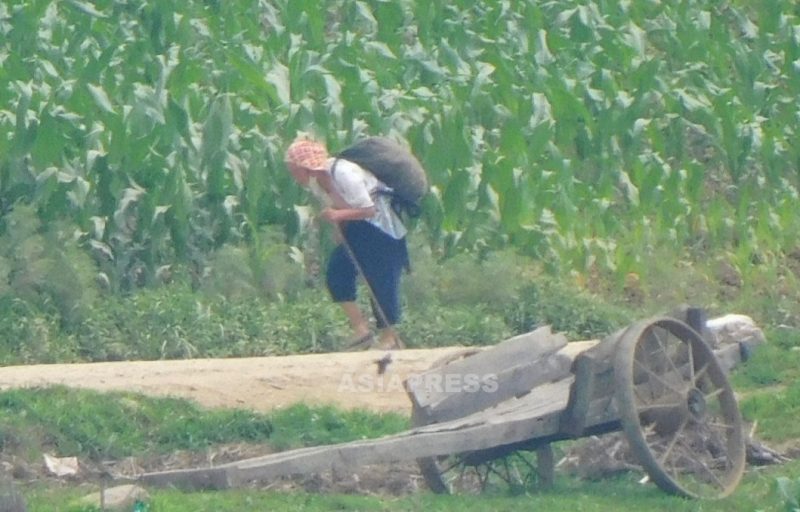 A woman in a rural area carrying a large bag while walking besides a farm field. Taken by ASIAPRESS in mid-July 2021.

◆ The regime claims that defectors sent the coronavirus into N. Korea

What was particularly interesting about the report made by “E” was the popular response to Kim Yo-jong’s speech on August 10. Kim claimed that it was clear that the virus had entered North Korea through South Korean goods, and that defector organizations had sent the virus into the country on propaganda leaflets.

―― Kim Yo-jong made a speech claiming that South Korean defectors had sent COVID-19 into North Korea.

“Is what she said true? I don’t really know. People who have been ill affected by COVID-19 are really angry. There’s people who call the defectors traitors, asking how they could have sent the virus into the country when they still have family here.”

―― People with relatives in South Korea must be in a tight spot.
“Kim Yo-jong’s statement has made it difficult for people with defector relatives to walk around openly. There’s been arguments over other things that spill over into people calling them ‘traitors’ and ‘turncoats.’ Even people who, just some time ago, were expressing envy over defector families getting money from their relatives in South Korea, are criticizing them. Defector families are facing considerable trouble over all this.

The COVID-19 pandemic caused the closure of the border with China for more than two years now. There’s been deaths and a lot of people suffering due to hunger. There’s a lot of people angry at defectors.”

◆ The COVID-19 situation is stabilizing

The reporting partners say that there are still a small number of fever patients and those in self-isolation. This suggests that the country hasn’t yet achieved “COVID zero”; however, the situation does appear to have stabilized a great deal.

The challenge North Koreans face now is the rebuilding of their lives. The Kim Jong-un regime’s disease control measures over the past two years and seven months have clearly been excessive, causing massive negative side effects. The government’s adherence to a zero COVID policy – including the closure of the borders in January 2020, the dramatic downsizing of trade with China, and bans on movement and goods – led to economic paralysis and severe shortages of necessities.

North Korea’s shortage of medications means that many children and the elderly died, and many people fell into poverty after seeing large reductions in their incomes. There has also been a massive increase in people suffering from malnutrition. All in all, North Korea is facing a clear humanitarian crisis. (END)