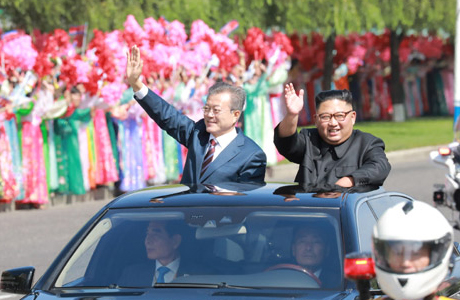 "Interest in President Moon Jae-in and expectations from his visit have weakened."

So says a Pyongyang businessman, interviewed by ASIAPRESS in late October. In China on business, the man gave a window into the excitement his fellow Pyongyang residents felt after President Moon’s first visit, asking wistfully, “Wasn’t President Moon welcomed so well when he first came to Pyongyang in September?” (Interviewer: Park Young-min / Organizer: ISHIMARU Jiro)

Q: Two months have passed since President Moon’s first visit to Pyongyang- how is the atmosphere in Pyongyang these days?

A: "Many people expected great things to come from President Moon's visit to Pyongyang. They thought he would bring aid of some sort. Due to economic sanctions, money had stopped circulating and life became very difficult- even for residents of Pyongyang. Since the visit, however, there has been no change and interest in President Moon and South Korea has decreased. It doesn’t even come up in conversation- people can't spare those things a thought as they are under too much pressure in their daily lives."

Q: President Moon was thrown a parade in downtown Pyongyang and he gave a speech in front of a lot of people. Did he not leave a favorable impression?

A: There was no one around me saying “Moon Jae-in is great”. Because those type of comments would get you taken away and killed. You can never make those comments in front of others.

Q: Asking locals, it seemed that many people came away from the event with a good impression. Do you agree?

A: Actually, President Moon’s visit to Pyongyang put quite a burden on the local people. They had to clean the streets, fix the roads, and prepare the parade- practicing for this type of event is exhausting. Initially, President Moon was to come just after the Founding Day Anniversary on September 9th but, due to delays, the preparation period was extended. Other complaints stemmed from the blockade set up around the city. Cars could not enter and business stopped as Pyongyang was shut off from the rest of the country. To be frank, President Moon’s visit was a nuisance for local people.
Next page: How did the North Korean authorities assess President Moon's visit?...