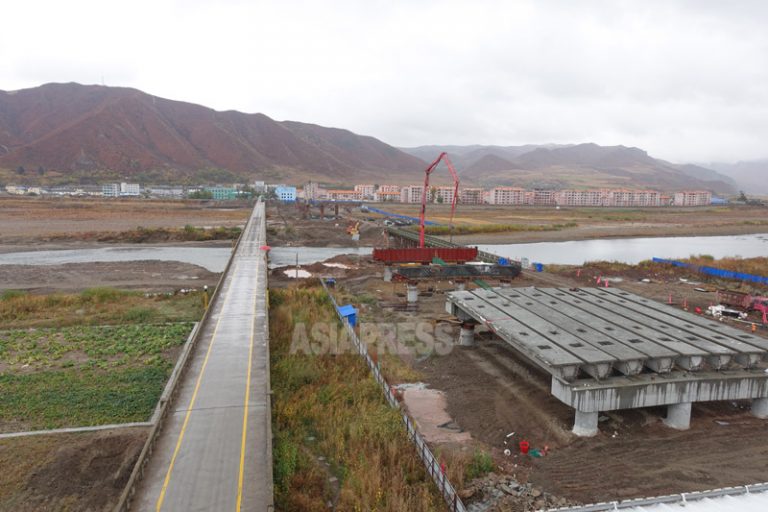 There is no traffic on the border bridge in Tumen, Jilin Province, China due to the suspension of trade. Taken by ISHIMARU Jiro in October 2017

■ Direct blow to the privileged class

Most trading companies are under the authority of state institutions. The most prominent and numerous are the enterprises affiliated with 'Room 39', an organization responsible for securing Kim Jong-un's governing funds. The People's Army, Party institutions, and Ministry of People’s Security (police) also have many affiliates. In addition to the export of goods that mainly contribute to foreign exchange earnings, such as coal, iron ore, seafood, nonferrous metals, rare metals, and textiles commissioned to be processed in China, these institutions have been made profitable by dispatching more than 50,000 workers to China and 30,000 workers to Russia and extracting a portion of their earnings. Foreign exchange earnings make the luxurious lives of the privileged, wealthy classes and ‘donju’ (wealthy merchant class) in Pyongyang possible.

China's sanctions dealt a serious blow to the wealthy class and trading companies. In March and April, my reporting team investigated the operations of several large-scale trading companies in North Korea.

The Moran Corporation is an enterprise affiliated with the 'Rakwon Guidance Bureau' which is under 'Room 39'. Its headquarters is located in Pyongyang, but we visited a branch office in Chongjin City, North Hamkyung Province to investigate. Chongjin is the third largest city in North Korea and faces the East Sea (Sea of Japan). Due to its proximity to the border, it is also a base for exporting seafood and minerals to China.

The Chongjin branch of the Moran Corporation has around 35 full-time employees and many subcontracting enterprises. After arriving at the office, we found out that they were unable to conduct business because of sluggish exports and were renting out their office to a donju who used the place as a warehouse. Employees were given 50 kilograms of white rice and CNY 500 (about 75.40 USD) a month before the sanctions, but the payments have ceased this year. Although the company used to deliver Chinese products such as TVs, rice cookers, water containers, beds, etc. to retailers, it is now making its own employees sell these goods. Employees are required to pay the company approximately 154.50 USD per month from their earnings and then any additional profits are theirs to keep.

Kangsung Trading Company, which also has a branch office in Chongjin, is affiliated with the General Political Bureau of the Korean People’s Army. Like Moran, it has leased its office to be used as a warehouse and wholesale store. The company’s 40 employees, without any rations or salary, go to the inner-city and rural areas to sell household goods and blankets. They are required to make monthly payments of about 232 USD to the company and employees who fail to do so for three consecutive months are fired. The company directly operates about five restaurants in downtown Chongjin and it is said that the restaurants’ profits are keeping the company afloat.

North Korea's trade with China involves the production of minerals, seafood, and textiles using cheap domestic labor. These goods are sold to China by trading companies affiliated with state institutions who later distribute the revenues to the rich and powerful of Pyongyang. The profits of the trading companies in Chongjin likewise go to Pyongyang’s elite. When trade halts due to sanctions, the common people become unemployed and experience reduced cash incomes, but the elite of Pyongyang are more seriously affected as the system of exploitation itself ceases to function.