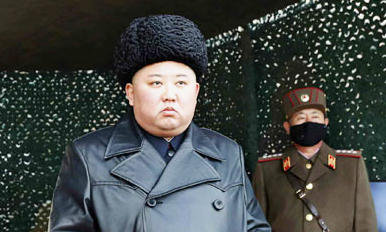 Kim Jong-un began to make appearances in public towards the end of February. This photograph, originally published by the Rodong Sinmun on March 3, 2020, was taken during his inspection of long-range artillery drills.

According to reporting partners in North Korea, people who had been placed under quarantine in order to prevent the spread of coronavirus are now being released and returned to their homes.

“Customs officials who had been in contact with foreigners, as well as those who had been in contact with the customs officials, had all been in quarantine until their release on February 20. While disinfection work continues at offices and homes, tensions are easing little-by-little with the news that the situation in China has stabilized. Traffic at markets has also increased slightly.”

Another reporting partner, living in Hyesan, Ryanggang Province, said on March 13, “All trade officials in quarantine were released at the end of February. The quarantine period was said to have been 30 days. The employees who had been quarantined separately at work are now returning as well.”

North Korea’s state media reported on March 1 that 7,000 people in the northern part of North Pyongan Province were placed under “medical surveillance.” This meant forced isolation. It was also reported on, March 8, that 3,650 people across the country were under quarantine.

Though this figure cannot be confirmed, ASIAPRESS has undertaken surveys within the country to determine how many citizens have been released from quarantine.

Another reporting partner, living in the north of the country, chose to investigate conditions on a cooperative farm and reported as follows:

“Everyone was trying to figure out what would happen due to the coronavirus situation, but annual directions for the sowing season came from the city as usual- they are planning to conduct a ‘farming mobilization.’ We are also gathering human excrement for compost.”

A huge population of North Koreans are expected to travel across the country for the annual “farming mobilization.” This migration will bring an increased risk of spreading the coronavirus. Compost, created with human excrement, will also pose an increased risk of infection.

In any case, it can be assumed that the Kim Jong-un regime has decided to release citizens from quarantine and allow for the upcoming “farming mobilization” due to a certain amount of confidence in its ability to prevent an outbreak.

Since the blockade at the Chinese border was put into place a month and a half ago, there has been a serious impact on the lives of residents. With trade completely cut off, the prices of Chinese goods have soared and markets have experienced a major slump.

The reporting partner living in Hyesan, Ryanggang Province, lamented the rising level of poverty, complaining, “Workers say they will more quickly starve to death than die from the coronavirus. I hope the Chinese border will be opened as soon as possible.”
Next page :No coronavirus test kits at regional hospitals...

Next Page： ◆ No coronavirus test kits at regional hospitals
1 2
Facebook Twitter はてブ Pocket Feedly
RECOMMENDATIONS
[Video Report] N.Korea Regulation Officer at Market
The video was filmed at a market in Pyongyang in August 2007. A regula...
"Interest in President Moon Jae-in and expectations from his visit hav...
[Video Report] N.Korean Kids on the Battle of Life
North Korean kids were forced to enter the battle of life since the ‘a...
＜Inside N.Korea＞ Is Economic Sanction Really Effective? Searching Effect from Retail Price Index
The UN Security Council adopted ‘Resolution 2270 (which sanctions Nort...
＜Photo Report＞ Kotchebi, the Homeless, Under the Kim Jong-un Regime (PART5) Toddlers and female Junior High School students roaming around a city. Some children have lost their legs.
2017/Jan/10 These pictures of “Kotchebi”, the homeless, were taken by...
Female Workers Stage a Walkout En Masse
2015/May/28 ISHIMARU Jiro, editor in chief - Rimjin-gang KANG Ji-won, ...